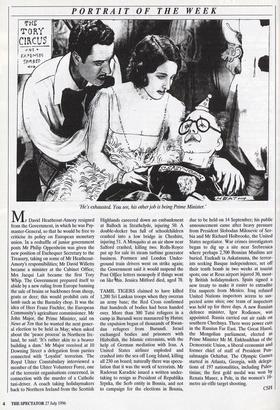 He's exhausted. You see, his other job is being Prime Minister '

Mr David Heathcoat-Amory resigned from the Government, in which he was Pay- master-General, so that he would be free to criticise its policy on European monetary union. In a reshuffle of junior government posts Mr Philip Oppenheim was given the new position of Exchequer Secretary to the Treasury, taking on some of Mr Heathcoat- Amory's responsibilities; Mr David Willetts became a minister at the Cabinet Office; Mrs Jacqui Lait became the first Tory Whip. The Government prepared itself to abide by a new ruling from Europe banning the sale of brains or backbones from sheep, goats or deer; this would prohibit cuts of lamb such as the Barnsley chop. It was the idea of Herr Franz Fischler, the European Community's agriculture commissioner. Mr John Major, the Prime Minister, said on News at Ten that he wanted the next gener- al election to be held in May; when asked about the 'peace process' in Northern Ire- land, he said: 'It's rather akin to a beaver building a dam.' Mr Major received at 10 Downing Street a delegation from parties connected with 'Loyalist' terrorism. The Royal Ulster Constabulary interviewed a member of the Ulster Volunteer Force, one of the terrorist organisations concerned, in connection with the murder of a Catholic taxi-driver. A coach taking holidaymakers back to Northern Ireland from the Scottish

Highlands careered down an embankment at Balloch in Strathclyde, injuring 50. A double-decker bus full of schoolchildren crashed into a low bridge in Cheshire, injuring 51. A Mosquito at an air show near Salford crashed, killing two. Rolls-Royce put up for sale its steam turbine generator business. Postmen and London Under- ground train drivers went on strike again; the Government said it would suspend the Post Ogice letters monopoly if things went on like*his. Jessica Mitford died, aged 78.

TAMIL TIGERS claimed to have killed 1,200 Sri Lankan troops when they overran an army base; the Red Cross confirmed that hundreds of bodies had been handed over. More than 300 Tutsi refugees in a camp in Burundi were massacred by Hutus; the expulsion began of thousands of Rwan- dan refugees from Burundi. Israel exchanged bodies and prisoners with Hizbollah, the Islamic extremists, with the help of German mediation with Iran. A United States airliner exploded and crashed into the sea off Long Island, killing all 230 on board; naturally there was specu- lation that it was the work of terrorists. Mr Radovan Karadzic issued a written under- taking to resign as President of Republika Srpska, the Serb entity in Bosnia, and not to campaign for the elections in Bosnia, due to be held on 14 September; his public announcement came after heavy pressure from President Slobodan Milosevic of Ser- bia and Mr Richard Holbrooke, the United States negotiator. War crimes investigators began to dig up a site near Srebrenica where perhaps 2,700 Bosnian Muslims are buried. Euzkadi to Askatasuna, the terror- ists seeking Basque independence, set off their tenth bomb in two weeks at tourist spots; one at Reus airport injured 30, most- ly British holidaymakers. Spain signed a new treaty to make it easier to extradite Eta suspects from Mexico. Iraq refused United Nations inspectors access to sus- pected arms sites; one team of inspectors was held up for three days. A new Russian defence minister, Igor Rodionov, was appointed. Russia carried out air raids on southern Checlmya. There were power cuts in the Russian Far East. The Great Hural, the Mongolian parliament, elected as Prime Minister Mr M. Enkhsaikhan of the Democratic Union, a liberal economist and former chief of staff of President Pun- salmaagin Ochirbat. The Olympic Games started in Atlanta, Georgia, with delega- tions of 197 nationalities, including Pales- tinian; the first gold medal was won by Renata Mauer, a Pole, in the women's 10- metre air-rifle target shooting. CSH