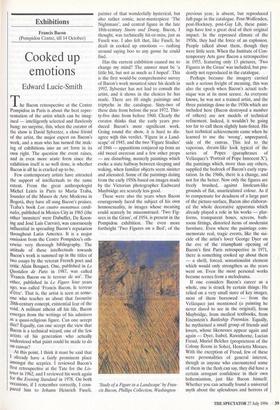 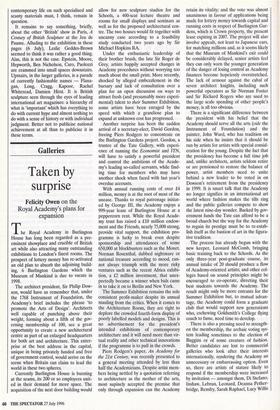 Edward Lucie-Smith The Bacon retrospective at the Centre Pompidou in Paris is about the best repre- sentation of the artist which can be imag- ined — intelligently selected and flawlessly hung: no surprise, this, when the curator of the show is David Sylvester, a close friend of the artist, the major expert on Bacon's work, and a man who has turned the mak- ing of exhibitions into an art form in its own right. The question the event raises, and in even more acute form since the exhibition itself is so well done, is whether Bacon is all he is cracked up to be.

Few contemporary artists have attracted the support of intellectuals to the same extent. From the great anthropologist Michel Leiris in Paris to Marta Traba, founder of the Museo de Arte Moderns in Bogota, they have all sung Bacon's praises. Traba's book Los cuatro monstruos cardi- nales, published in Mexico City in 1965 (the other 'monsters' were Dubuffet, De Koon- ing and Jose Luis Cuevas), was enormously influential in spreading Bacon's reputation throughout Latin America. It is a major omission from the Centre Pompidou's oth- erwise very thorough bibliography. The attitude of these intellectuals towards Bacon's work is summed up in the titles of two essays by the veteran French poet and critic Alain Bosquet. One, published in Le Quotidien de Paris in 1987, was called `Francis Bacon ou le terreur de soi'. The other, published in Le Figaro four years ago, was called `Francis Bacon, le terreur d'être'. That is, the artist is seen as some- one who teaches us about that favourite 20th-century concept, existential fear of the void. A militant atheist all his life, Bacon emerges from the writings of his admirers as a quasi-religious figure. Can one accept this? Equally, can one accept the view that Bacon is a technical wizard, one of the few artists of his generation who actually understood what paint could be made to do on canvas?

At this point, I think it must be said that I already have a fairly prominent place amongst the sceptics. I reviewed Bacon's first retrospective at the Tate for the Lis- tener in 1962, and I reviewed his work again for the Evening Standard in 1978. On both occasions, if I remember correctly, I com- Pared him to Johann Heinrich Fuseli, painter of that wonderfully hysterical, but also rather comic, near-masterpiece `The Nightmare', and central figure in the late 18th-century Sturm and Drang. Bacon, I thought, was technically hit-or-miss, just as Fuseli was. I also felt that, like Fuseli, he dealt in cooked up emotions — rushing around saying boo to any goose he could find.

Has the current exhibition caused me to change my mind? The answer must be 'a little bit, but not as much as I hoped'. This is the first would-be comprehensive survey of Bacon's work mounted since his death in 1992. Sylvester has not had to consult the artist, and it shows in the choices he has made. There are 88 single paintings and triptychs in the catalogue. Sixty-two of these date from before the year 1972. Thir- ty-five date from before 1960. Clearly the curator thinks that the early years pro- duced Bacon's most significant work. Going round the show, it is hard to dis- agree with this verdict. `Figure in a Land- scape' of 1945, and the two `Figure Studies' of 1946 — apparitions conjured up from an old tweed overcoat and a few other props — are disturbing, masterly paintings which evoke a state halfway between sleeping and waking, when familiar objects seem sinister and alienated. Some of the paintings dating from the early 1950s based on images made by the Victorian photographer Eadweard Muybridge are scarcely less good.

These were also the years when Bacon courageously faced the subject of his own homosexuality, in images whose meaning could scarcely be misconstrued. `Two Fig- ures in the Grass', of 1954, is present in the Pompidou exhibition. The even more forthright `Two Figures on a Bed', of the 'Study of a Figure in a Landscape' by Fran- cis Bacon, Phillips Collection, Washington previous year, is absent, but reproduced full-page in the catalogue. Post-Wolfenden, post-Hockney, post-Gay Lib, these paint- ings have lost a great deal of their original impact. In the repressed climate of the 1950s, they had the force of an explosion. People talked about them, though they were little seen. When the Institute of Con- temporary Arts gave Bacon a retrospective in 1955, featuring only 13 pictures, `Two Figures in the Grass' was included, but pru- dently not reproduced in the catalogue.

Perhaps because the imagery carried such a serious freight of meaning, this was also the epoch when Bacon's actual tech- nique was at its most secure. As everyone knows, he was not a trained artist, and the three paintings done in the 1930s which are included here (Bacon destroyed a number of others) are not models of technical refinement. Indeed, it wouldn't be going too far to call them slightly ham-fisted. His best technical achievements came when he learned to use the 'wrong, unprepared, side of the canvas. This led to the vaporous, dream-like look typical of the series of Popes (paraphrases of Velazquez's 'Portrait of Pope Innocent X'), the paintings which, more than any others, supplied the bedrock of Bacon's early repu- tation. In the 1960s, there is a change, and not for the better. Now only the figures are freely brushed, against linoleum-like grounds of flat, unarticulated colour. As if to compensate for deadness of a large part of the picture-surface, Bacon also elaborat- ed the whole decorative apparatus which already played a role in his works — plat- forms, transparent boxes, screens, bath- room fittings, distorted items of modernist furniture. Even where the paintings com- memorate real, tragic events, like the sui- cide of the artist's lover George Dyer on the eve of the triumphant opening of Bacon's first Paris retrospective in 1971, there is something cooked up about them — a shrill, forced, sensationalist element which would only strengthen as the years went on. Even the most personal works became scenes from a melodrama.

If one considers Bacon's career as a whole, one is struck by certain things. He relied on a very small store of key images, most of them borrowed — from the Velazquez just mentioned (a painting he never dared to see in the original), from Muybridge, from medical textbooks, from Eisenstein's Battleship Potemkin. Equally, he mythicised a small group of friends and lovers, whose likenesses appear again and again — Dyer, Isabel, Rawsthome, Lucian Freud, Muriel Belcher (proprietress of the Colony Room in Soho), Henrietta Moraes. With the exception of Freud, few of these were personalities of general interest, though as anyone who encountered some of them in the flesh can say, they did have a certain arrogant confidence in their own bohemianism, just like Bacon himself. Whether you can actually found a universal myth about the splendours and horrors of

contemporary life on such specialised and scanty materials must, I think, remain in question.

It remains to say something, briefly, about the other 'British' show in Paris, A Century of British Sculpture at the Jeu de Paume. Alluding to the exhibition in these pages (6 July), Leslie Geddes-Brown seemed to think it was rather a good thing. Alas, this is not the case. Epstein, Moore, Hepworth, Ben Nicholson, Caro, Paolozzi are crammed into small spaces downstairs. Upstairs, in the larger galleries, is a parade of currently fashionable names — Flana- gan, Long, Cragg, Kapoor, Rachel Whiteread, Damien Hirst. It is British sculpture seen through the eyes of leading international art magazines: a hierarchy of what is 'important' which has everything to do with current hype and almost nothing to do with a sense of history or with individual judgment. Better not to publicise national achievement at all than to publicise it in these terms.