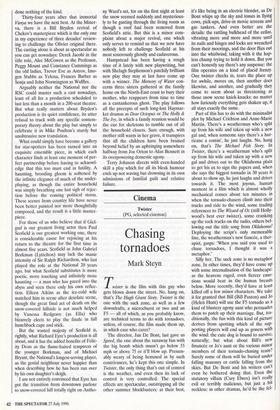 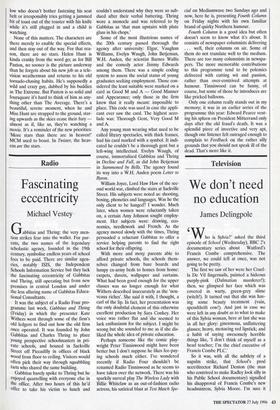 Twister is the film with this guy who gets blown down the street. No, hang on, that's The Hugh Grant Story. 7Wister is the one with the suck zone, as well as a few downdrafts, a microcburst or two and an F5 — all of which, as you probably know, are technical terms to do with tornadoes, unless, of course, the film made them up, in which case who cares?

The director, Jan De Bont, last gave us Speed, the one about the runaway bus with the big bomb which musn't go below 55 mph or above 75 or it'll blow up. Presum- ably weary of being hemmed in by such contrivances, he's kept this one simple. In Twister, the only thing that's out of control is the weather, and even then its lack of control is very controlled. The special effects are spectacular, outstripping all the other summer blockbusters: at their best,

it's like being in an electric blender, as De Bont whips up the sky and tosses in flying cows, pick-ups, drive-in movie screens and gas tankers. And even better are the details: the rattling bulkhead of the cellar, vibrating more and more and more until its nails and hinges and locks are wrenched from their moorings, and the door flies out into the whirlwind, taking with it the hap- less chump trying to hold it down. But you can't honestly say there's any suspense: the film operates on a kind of placid frenzy. One twister checks in, tears the place up for awhile, moves on, then another does likewise, and another, and gradually they come to seem about as threatening as those snow scene knick-knacks: no matter how furiously everything gets shaken up, it all stays exactly the same.

Silly her. The suck zone is no metaphor zone. In other times, they'd have come up with some internalisation of the landscape: as the heavens raged, even fiercer emo- tions would beat in the human breasts below. More recently, they'd have at least killed off a few minor characters. We take it for granted that Bill (Bill Paxton) and Jo (Helen Hunt) will use the F5 tornado as a kind of blustery agony aunt who persuades them to patch up their marriage. But, tra- ditionally, the fun with this kind of picture derives from spotting which of the sup- porting players will end up as goners with the wind: the cute dog is bound to survive, naturally; but what about Bill's new finance e or Jo's aunt or the various minor members of their tornado-chasing team? Surely some of them will be buried under falling masonry or cattle falling from the skies. But De Bont and his writers can't even be bothered doing that. Even the statutory villain (Cary Elwes) isn't really evil or terribly malicious, but just a bit reckless: in other dramas, he'd be the fel-

low who doesn't bother fastening his seat belt or irresponsibly tries getting a jammed bit of toast out of the toaster with his knife while it's still plugged in and a child is watching.

None of this matters. The characters are there merely to enable the special effects, and then stay out of the way. For that rea- son, there are no stars. Helen Hunt is kinda cranky from the word go; as for Bill Paxton, no sooner is the picture underway than he forgets about his new job as a tele- vision weatherman and returns to his old tornado-chasing habits. He's supposedly a wild and crazy guy, dubbed by his buddies as The Extreme. But Paxton is so solid and foursquare it's hard to think of him as any- thing other than The Average. There's a beautiful, serene moment, when he and Miss Hunt are strapped to the ground, star- ing upwards as the skies cease their fury almost as if, like us, they're watching a movie. It's a reminder of the new priorities: `More stars than there are in heaven!' MCM used to boast. In Twister, the heav- ens are the stars.