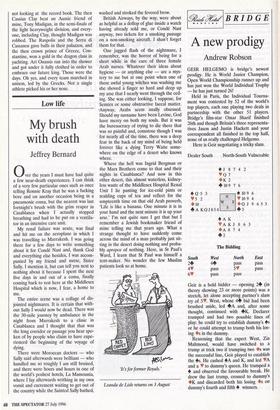 GEIR HELGEMO is bridge's newest prodigy. He is World Junior Champion, Open World Championship runner up and has just won the World Individual Trophy — he has just turned 26!

Held in Paris, the Individual Tourna- ment was contested by 52 of the world's top players, each one playing two deals in partnership with the other 51 players. Bridge's film-star Omar Sharif finished 26th and though Britain's three representa- tives Jason and Justin Hackett and your correspondent all finished in the top half, none of us really challenged Helgemo.

Geir is a bold bidder — opening 24 (in theory showing 23 or more points) was a stretch, let alone accepting partner's slam try of 5V. West, whose 44 bid had been brushed aside, led 4A and, after some thought, continued with 4K. Declarer trumped and had two possible lines of play: he could try to establish dummy's 4s or he could attempt to trump both his los- ing +s in the dummy.

Reasoning that the expert West, Zia Mahmood, would have switched to a trump at trick two if trumping two •s was the successful line, Geir played to establish the 4s. He cashed 4A and K, and led VA and a II to dummy's queen. He trumped a 4 and observed the favourable break. He drew the last trump, crossed to dummy's 4K and discarded both his losing 4s on dummy's fourth and fifth 4 winners.