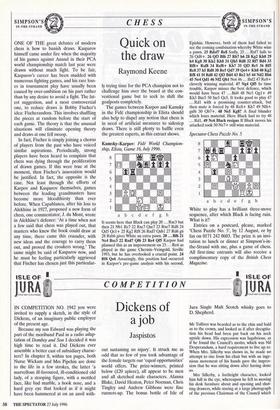 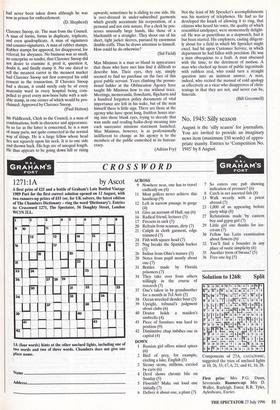 IN COMPETITION NO. 1942 you were invited to supply a sketch, in the style of Dickens, of an imaginary public employee of the present age.

Because my son Edward was playing the part of the moribund Paul in a radio adap- tation of Dombey and Son I decided it was high time to read it. Did Dickens ever assemble a better cast of subsidiary charac- ters? In chapter 8, within ten pages, both Nurse Wickam and Mrs Pipchin are done to the life in a few strokes, the latter 'a marvellous ill-favoured, ill-conditioned old lady, of a stooping figure, with a mottled face, like bad marble, a hook nose, and a hard grey eye that looked as if it might have been hammered at on an anvil with- out sustaining an injury'. It struck me as odd that so few of you took advantage of the female targets our 'equal opportunities' world offers. The prize-winners, printed below (£20 apiece), all appear to be men and all sketched male characters. Alanna Blake, David Heaton, Peter Norman, Chris Tingley and Andrew Gibbons were fine runners-up. The bonus bottle of Isle of Jura Single Malt Scotch whisky goes to D. Shepherd.

Mr Tolliver was bearded as to the chin and bald as to the crown, and looked as if after decapita- tion his head had been put back on his neck upside down. His expression was lugubrious, as if he found the Council's motto, which was Nil Desperandum, a hard requirement to live up to. When Mrs. Sillerby was shown in, he made no attempt to rise from his chair but with an inge- nious movement of his hands gave the impres- sion that he was sitting down after having done so.

Mrs Sillerby, a forthright character, looked him full in the eye, whereupon he fell to moving his desk furniture about and opening and shut- ting drawers, while staring at a large photograph of the previous Chairman of the Council which

had never been taken down although he was now in prison for embezzlement.

(D. Shepherd) Clarence Snoop, sir. The man from the Council. A man of forms, forms in duplicate, triplicate, and even quadruplicate. A man of signatures and counter-signatures. A man of rubber stamps. Rubber stamps for approval, for disapproval, for referral, for abeyance. No business was so small, no enterprise so tender, that Clarence Snoop did not desire to examine it, prod it, question it, doubt it, and finally stamp it. No one dared to sell the meanest carrot in the meanest market had Clarence Snoop not first conveyed his cold consent to the transaction. If Clarence Snoop had a dream, it could surely only be of every maternity ward in every hospital being com- pelled to greet every new-born babe with a suit- able stamp, in one corner of which would be pro- claimed: Approved by Clarence Snoop.

(Paul Hatton) Mr Piddlecock, Clerk to the Council, is a man of Combinations, both in character and appearance. In so far as the latter is concerned, he is a man of many parts, not quite connected in the normal way of things. He is a large fellow whose head lies not squarely upon his neck. It is to one side and thrown back. His legs are of unequal length. He thus appears to he going down hill or rising upwards; sometimes he is sliding to one side. He is over-dressed in under-subscribed garments which greatly accentuate his corporation, of a personal and not civic nature. For a clerk he pos- sesses unusually large hands, like those of a blacksmith or a strangler. They shoot out of his short, tight jacket sleeves, pursued by enormous double-cuffs. Thus he draws attention to himself. How could he do otherwise?

(Sid Field) Max Minimus is a man so bland in appearance that those who have met him find it difficult to describe him. Their eyes, they say, simply seemed to find no purchase on the face of this great public servant. Years climbing the promo- tional ladder at the Obfuscation Agency have taught Mr Minimus how to rise without trace. Meetings, memoranda, flowcharts, flipcharts and a hundred forgotten policy documents of vital importance arc left in his wake, but of the man himself there is little sign. There arc those at the agency who have spent long, fruitless hours star- ing into those blank eyes, trying to decode that wan smile and reading haiku-deep meaning into each successive missions statement launched. Max Minimus, however, is as professionally indifferent to change as his agency is to the members of the public enmeshed in its bureau- cracy.

(Adrian Fry) Not the least of Mr Sprocket's accomplishments was his mastery of telephones. He had so far developed the knack of allowing it to ring, that citizens who heard his voice, the quality of which resembled sandpaper, were momentarily delight- ed. He was as punctilious as a stopwatch, had it but been started. His employers, casting diligent- ly about for a field in which Mr Sprocket might excel, had hit upon Customer Service, in which department he had fallen with precision. He was a man obsequious to a fault. A man obsessed with the time, to the detriment of motion. A man who clocked up hours of public ingratitude with ruthless zeal, who could turn a straight question into an insistent answer. A man, indeed, who recited the manual of cold apology as effectively as a vicar who disapproves of chris- tenings in that they are not, and never can be, funerals.

August is the 'silly season' for journalists. You are invited to provide an imaginary news item (maximum 150 words) of appro- priate inanity. Entries to 'Competition No. 1945' by 8 August.