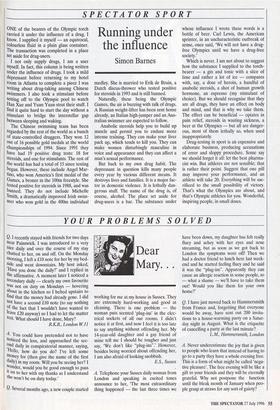 Q. I recently stayed with friends for two days near Painswick. I was introduced to a very nice daily and over the course of my stay chatted to her, on and off. On the Monday morning, I left a £10 note for her by my bed- side and went downstairs. My host asked, Have you done the daily?' and I replied in the affirmative. A moment later I noticed a secondary daily — clearly my own favourite Was not on duty on Mondays — hovering about in the kitchen so I belted upstairs to find that the money had already gone. I did not have a second £10 note (to say nothing of the fact that I wouldn't have wanted to leave £20 anyway) so I had to let the matter rest. What should I have done, Mary?

4. You could have pretended not to have noticed the loss, and approached the sec- ond daily in conspiratorial manner, saying, Hello, how do you do? I've left some money for (then give the name of the first daily) in my room. Will you be seeing her? I Wonder, would you be good enough to pass it on to her with my thanks as I understand she won't be on duty today.'

working for me atmy house in Sussex. They are extremely hard-working and good at cleaning. There is one problem — the woman puts scented 'plug-ins' in the elec- trical sockets of all our rooms. I didn't notice it at first, and now I feel it is too late to say anything without offending her. My 14-year-old daughter and a gay friend of mine tell me I should be tougher and just say, 'We don't like "plug-ins".' However, besides being worried about offending her, I am also afraid of looking snobbish.

A. Telephone your Sussex daily woman from London and speaking in excited tones announce to her, The most extraordinary thing happened — the last three times we

have been down, my daughter has felt really fluey and achey with her eyes and nose streaming, but as soon as we got back to London the symptoms wore off! Then we had a doctor friend to lunch here last week- end and he started feeling fluey and he said it was the "plug-ins". Apparently they can cause an allergic reaction in some people, so — what a shame — we'll have to take them out! Would you like them for your own home?'

Q. I have just moved back to Hammersmith from France and, forgetting that everyone would be away, have sent out 200 invita- tions to a house-warming party on a Satur- day night in August. What is the etiquette of cancelling a party at the last minute?

A. Never underestimate the joy that is given to people who learn that instead of having to go to a party they have a whole evening free. This is a form of what might be called 'nega- tive pleasure'. The free evening will be like a gift to your friends and they will be eternally grateful. Why not postpone the function until the bleak month of January when peo- ple grasp at straws for any sort of gaiety?