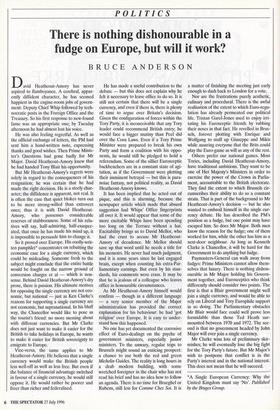 There is nothing dishonourable in a fudge on Europe, but will it work?

David Heathcoat-Amory has never aspired to flamboyance. A cerebral, appar- ently diffident character, he has seemed happiest in the engine-room jobs of govern- ment: Deputy Chief Whip followed by tech- nocratic posts in the Foreign Office and the Treasury. So his first response to new-found fame was an appropriate one; by Tuesday afternoon he had almost lost his voice.

He was also feeling regretful. As well as the official exchange of letters, the PM had sent him a hand-written note, expressing thanks and good wishes. Then Prime Minis- ter's Questions had gone badly for Mr. Major. David Heathcoat-Amory knew that he had handed Tony Blair his opportunity.

But Mr Heathcoat-Amory's regrets were solely in regard to the consequences of his resignation; he was certain that he had made the right decision. He is a steely char- acter; the diffidence is apparent, not real. It is often the case that quiet blokes turn out to be more strong-willed than extrovert ones; thus it is with David Heathcoat- Amory, who possesses considerable reserves of stubbornness. Some of his rela- tives will say, half-admiring, half-exasper- ated, that once he has made his mind up, it is impossible to persuade him to change it.

So it proved over Europe. His coolly-writ- ten pamphlet* concentrates on rebutting the economic case for a single currency, which could be misleading. Someone fresh to the subject might conclude that the entire battle would be fought on the narrow ground of conversion charges et al — which is non- sense. Behind David Heathcoat-Arnory's dry prose, there is passion. His ultimate motives for opposing the single currency are not eco- nomic, but national — just as Ken Clarke's reasons for supporting a single currency are not economic, but supranational. In his bluff way, the Chancellor would like to pose as the tourist's friend: no more messing about with different currencies. But Mr Clarke does not just want to make it easier for the British to take holidays in Europe, he wants to make it easier for British sovereignty to emigrate to Europe.

Vice-versa, the same applies to Mr Heathcoat-Amory. He believes that a single currency would make the British people less well-off as well as less free. But even if the balance of financial advantage switched in favour of a single currency, he would still oppose it. He would rather be poorer and freer than richer and federalised. He has made a useful contribution to the debate — but this does not explain why he felt it necessary to leave office to do so. It is still not certain that there will be a single currency, and even if there is, there is plenty of time to argue over Britain's decision. Given the configuration of forces within the Tory Party, it is inconceivable that any Tory leader could recommend British entry; he would face a bigger mutiny than Peel did over the Corn Laws. Even if a Tory Prime Minister were prepared to break his own Party and form a coalition with his oppo- nents, he would still be pledged to hold a referendum. Some of the sillier Eurosceptic backbenchers are in a constant state of agi- tation, as if the Government were plotting their imminent betrayal — but this is para- noiac fantasy, not political reality, as David Heathcoat-Amory knows.

It has been implied that he acted out of pique, and this is alarming, because the newspaper article which made that absurd suggestion had Whips' Office fingerprints all over it. It would appear that some of the more excitable Whips have been spending too long on the Terrace without a hat. Excitability brings us to David Mellor, who had the crust to accuse Mr Heathcoat- Amory of decadence. Mr Mellor should save up that word until he needs a title for his memoirs. He never had much judgment, and it is some years since he last engaged brain, except when counting his extra-Par- liamentary earnings. But even by his stan- dards, his comments were crass. It may be that he is jealous of a colleague who leaves office in honourable circumstances.

As Mr Heathcoat-Amory himself would confirm — though in a different language — a very senior member of the Major administration has provided the correct explanation for his behaviour: he had tot religion' over Europe. It is easy to under- stand how this happened.

No one has yet documented the corrosive effect of Euro-dealings on the psyche of government ministers, especially junior ministers. To the unwary, regular trips to Brussels might sound an enticing prospect: a chance to use both the red and green Michelin Guides. The reality is long hours in a drab modern building, with some wretched foreigner in the chair who has not read his brief and has no idea how to follow an agenda. There is no time for Brueghel or Rubens, still less for Comme Chez Soi. It is a matter of finishing the meeting just early enough to dash back to London for a vote.

Nor are the frustrations purely aesthetic, culinary and procedural. There is the awful realisation of the extent to which Euro-regu- lation has already permeated our political life. Tristan Garel-Jones used to enjoy irri- tating his Eurosceptic friends by rubbing their noses in that fact. He revelled in Brus- sels, forever plotting with Enrique and Wolfgang to stuff up Giuseppe and Mikis while assuring everyone that the Brits could play the Euro-game as will as any of the rest.

Others prefer our national games. Most Tories, including David Heathcoat-Amory, have traditional ambitions. They want to be one of Her Majesty's Ministers in order to exercise the power of the Crown in Parlia- ment, accountable to the British electorate. They find the extent to which Brussels cir- cumscribes their ability to do so a constant strain. That is part of the background to Mr Heathcoat-Amory's decision — but he also wanted to embroil himself in the single cur- rency debate. He has described the PM's position as a fudge, but one point may have escaped him. So does Mr Major. Both men know the reason for the fudge; one of them worked for him, while the other has him as a next-door neighbour. As long as Kenneth Clarke is Chancellor, it will be hard for the Government to do anything but fudge.

Paymasters-General can walk away from fudges: Prime Ministers cannot allow them- selves that luxury. There is nothing dishon- ourable in Mr Major holding his Govern- ment together, and Eurosceptics who think differently should consider two points. The first is that a Blair government might well join a single currency, and would be able to rely on Liberal and Tory Europhile support in so doing. The Parliamentary obstacles Mr Blair would face could well prove less formidable than those Ted Heath sur- mounted between 1970 and 1972. The sec- ond is that no government headed by John Major will ever join a single currency.

Mr Clarke wins lots of preliminary skir- mishes; he will eventually lose the big fight for the Tory Party's future. But Mr Major's wish to postpone that conflict is in the Party's interest and in the national interest. This does not mean that he will succeed.

*A Single European Currency: Why the United Kingdom must say 'No'. Published by the Bruges Group.