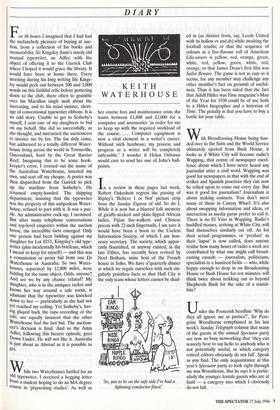 For 48 hours I imagined that I had had the melancholy pleasure of buying at auc- tion, from a collection of his books and memorabilia, Sir Kingsley Amis's sturdy old manual typewriter, an Adler, with the object of offering it to the Garrick Club where I hoped it would grace the library. It would have been at home there. Every morning during his long writing life Kings- ley would peck out between 500 and 1,000 words on this faithful relic before pottering down to the club, there often to grumble over his Macallan single malt about the increasing, and to his mind sinister, short- age of conventional typewriter ribbons. It is an odd story. Unable to get to Sotheby's myself, I sent one of my daughters to bid on my behalf. She did so successfully, as she thought, and instructed the auctioneers to invoice me by fax. The fax duly came, but addressed to a totally different Water- house living across the world in Townsville, Queensland, hard by the Great Barrier Reef. Imagining this to be some book- keeper's error, I crossed out the name of the Australian Waterhouse, inserted my own, and sent off my cheque. A porter was then dispatched from the Garrick to pick up the machine from Sotheby's. He returned empty-handed. The shipping department, insisting that the typewriter was the property of this antipodean Water- house, refused to part with it. It was a puz- zle. An administrative cock-up, I surmised. But after many telephone conversations and top-level enquiries within the auction house, the incredible facts emerged. Only one person had been bidding against my daughter for Lot 0251, Kingsley's old type- writer (plus incidentally his briefcase, which I meant to keep for myself) — and this was a commission or proxy bid from one Dr Waterhouse in Australia. So two Water- houses, separated by 12,000 miles, were bidding for the same object. Odds, anyone? And are we by any chance related? My daughter, who is in the antiques racket and knows her way around a sale room, is adamant that the typewriter was knocked down to her — particularly as she had not Yet reached my ceiling. Yet Sotheby's, hav- ing played back the tape-recording of the sale, are equally insistent that the other Waterhouse had the last bid. The auction- eer's decision is final. And so the Amis Adler, following this bizarre episode, goes ?own Under. He will not like it. Australia Is just about as Abroad as it is possible to get.

While two Waterhouses battled for an old typewriter, I received a begging letter from a student hoping to do an MA degree course in `playwriting studies'. As well as

her course fees and maintenance costs she wants between £1,800 and £2,000 for a computer and accessories in order for me to keep up with the required workload of the course.. .. Computer equipment is now a vital element in a writer's career. Without such hardware, my process and progress as a writer will be completely unfeasible.' I wonder if Helen Osborne would care to send her one of John's ball- points.

In a review in these pages last week, Robert Oakeshott regrets the passing of Ripley's 'Believe I or Not' picture strip from the Sunday Express of old. So do I. While it is now but a blurred folk memory of giraffe-necked and plate-lipped African ladies, Fijian fire-walkers and Chinese priests with 22-inch fingernails, I am sure it would have been a boon to the Useless Information Society, of which I am hon- orary secretary. The society, which appar- ently flourished, or anyway existed, in the late Fifties, has recently been revived by Noel Botham, mine host of the French house in Soho. We have equarterly dinner at which we regale ourselves with such sin- gularly pointless facts as that Hull City is the only team whose letters cannot be shad- lightning conductor fitted.' do not fall. ed in (as distinct from, say, Leeds United with its hollow es and ds) while awaiting the football results; or that the sequence of colours in a five-flavour roll of American Life-savers is yellow, red, orange, green, white, red, yellow, green, white, red, orange; or that James Dean's first film was Sailor Beware. The game is not as easy as it seems, for any member may challenge any other member's fact on grounds of useful- ness. Thus it has been ruled that the fact that Adolf Hitler was Time magazine's Man of the Year for 1930 could be of use both to a Hitler biographer and a historian of Time. The penalty is that you have to buy a bottle for your table.

With Broadcasting House being han- ded over to the Suits and the World Service ultimately ejected from Bush House, it looks as if White City will become radio's Wapping, that centre of newspaper excel- lence about which I have never heard any journalist utter a civil word. Wapping was good for newspapers in that with the end of strikes and Spanish practices they can now be relied upon to come out every day. But was it good for journalism? Journalism is about making contacts. You don't meet many of those in Canary Wharf. It's also about swopping information and ideas, or interaction as media gurus prefer to call it. There is no El Vino in Wapping. Radio's huddled masses, arriving at White City, will find themselves similarly cut off. As for their actual programmes, or 'product' as their 'input' is now called, does anyone realise how many hours of radio a week are contributed by what one might call broad- casting casuals — journalists, politicians, specialists in a hundred fields — who, while happy enough to drop in on Broadcasting House or Bush House for ten minutes, will think twice about trekking out to beyond Shepherds Bush for the sake of a sound- bite?

Under the Pooterish headline 'Why do they all ignore me at parties?', Sir Pere- grine Worsthorne complained in his last week's Sunday Telegraph column that many of the guests at the annual Spectator party are now so busy networking that 'they can scarcely bear to say hello to anybody who is not potentially useful, in which category retired editors obviously do not fall'. Speak as you fmd. The only acquaintance at this year's Spectator party to look right through trc- --"•• me was Worsthorne. But he says it is partic- ularly the younger female guests who are at So, just to be on the safe side I've had a fault — a category into which I obviously