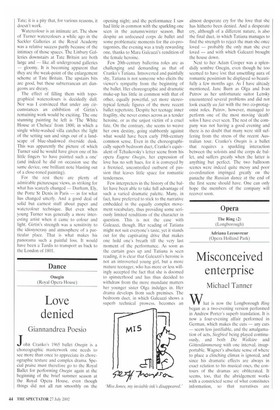 John Cranko's 1965 ballet Onegin is a choreographic masterwork one needs to see more than once to appreciate its choreographic texture and complex drama. Special praise must therefore go to the Royal Ballet for performing Onegin again at the beginning of the brief summer season at the Royal Opera House, even though things did not all run smoothly on the

opening night; and the performance I saw had little in common with the sparkling one seen in the autumn/winter season. But despite an unfocused corps de ballet and some problematic moments for the co-protagonists, the evening was a truly rewarding one, thanks to Mara Galeazzi's rendition of the female heroine.

Few 20th-century ballerina roles are as challenging and demanding as that of Cranko's Tatiana. Introverted and painfully shy, Tatiana is not someone who elicits the viewer's sympathy from the beginning of the ballet. Her choreographic and dramatic make-up has little in common with that of other, equally powerful, yet more stereotypical female figures of the more recent ballet repertoire. Despite her teenage inner fragility, she never comes across as a tender heroine, or as the unjust victim of a cruel fate. On the contrary, she seems to weave her own destiny, going stubbornly against what would have been early 19th-century common sense. Even in the choreographically superb bedroom duet, Cranko's equivalent of Tchaikovsky's letter scene from his opera Eugene Onegin, her expression of love has no soft hues, for it is conveyed by a frenzied, uncontrolled outburst of passion that leaves little space for romantic tenderness.

Few interpreters in the history of the ballet have been able to take full advantage of such a varied dramatic palette. Many, in fact, have preferred to stick to the narrative embedded in the equally complex movement vocabulary, thus providing some seriously limited renditions of the character in question. This is not the case with Galeazzi, though. Her reading of Tatiana might not suit everyone's taste, yet it stands out for the captivating drive that makes one hold one's breath till the very last moment of the performance. As soon as the curtain goes up and Tatiana is seen reading, it is clear that Galeazzi's heroine is not an introverted young girl, hut a more mature teenager, who has more or less willingly accepted the fact that she is doomed to spinsterhood and has thus decided to withdraw from the more mundane matters her younger sister Olga indulges in, Her drama develops from such premises. The bedroom duet, in which Galeazzi shows a superb technical prowess, becomes an almost desperate cry for the love that she has hitherto been denied. And a desperate cry, although of a different nature, is also the final duet, in which Tatiana manages to find the strength to reject the man she once loved — probably the only man she ever loved — and with which Galeazzi brought the house down.

Next to her Adam Cooper was a splendidly sombre Onegin, even though he too seemed to have lost that unsettling aura of romantic pessimism he displayed so beautifully a few months ago. As I have already mentioned, Jane Burn as Olga and Ivan Putrov as her unfortunate suitor Lensky encountered several problems and did not look exactly au fait with the two co-protagonist roles. Putrov, however, managed to perform one of the most moving 'death' solos I have ever seen. The rest of the company was not having a good evening and there is no doubt that many were still suffering from the stress of the recent Australian tour, Cranko's Onegin is a ballet that requires a sparkling interaction between the soloists and the corps de ballet, and suffers greatly when the latter is anything but perfect. The two ballroom scenes were indeed quite messy and poor co-ordination impinged greatly on the panache the Russian dance at the end of the first scene should have. One can only hope the members of the company will recover soon.