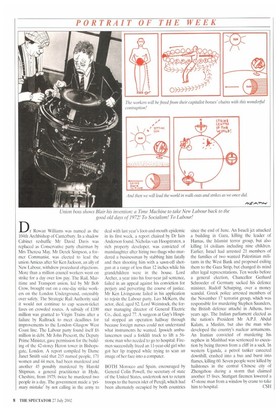 D r Rowan Williams was named as the 104th Archbishop of

Canterbury. In a shadow Cabinet reshuffle Mr David Davis was replaced as Conservative party chairman by Mrs Theresa May. Mr Derek Simpson, a former Communist, was elected to lead the union Amiens after Sir Ken Jackson, an ally of New Labour, withdrew procedural objections. More than a million council workers went on strike for a day over low pay. The Rail, Maritime and Transport union, led by Mr Bob Crow, brought out on a one-day strike workers on the London Underground, ostensibly over safety. The Strategic Rail Authority said it would not continue to cap season-ticket fares on crowded routes. A subsidy of £100 million was granted to Virgin Trains after a failure by Railtrack to meet deadlines for improvements to the London—Glasgow West Coast line. The Labour party found itself £6 million in debt. Mr John Prescott, the Deputy Prime Minister, gave permission for the building of the 42-storey Heron tower in Bishopsgate, London. A report compiled by Dame Janet Smith said that 215 named people, 171 women and 44 men, had been murdered and another 45 possibly murdered by Harold Shipman, a general practitioner in Hyde, Cheshire, from 1975; twice he murdered two people in a day. The government made a 'primary mistake' by not calling in the army to deal with last year's foot-and-mouth epidemic in its first week, a report chaired by Dr fain Anderson found. Nicholas van Hoogstraten, a rich property developer, was convicted of manslaughter after hiring two thugs who murdered a businessman by stabbing him fatally and then shooting him with a sawn-off shotgun at a range of less than 12 inches while his grandchildren were in the house. Lord Archer, a year into his four-year jail sentence, failed in an appeal against his conviction for perjury and perverting the course of justice. Mr Ken Livingstone failed in his application to rejoin the Labour party. Leo McKent, the actor, died, aged 82. Lord Weinstock, the former managing director of General Electric Co., died, aged 77. A surgeon at Guy's Hospital stopped an operation halfway through because foreign nurses could not understand what instruments he wanted. Ipswich ambulancemen used a forklift truck to lift a 56stone man who needed to go to hospital. Firemen successfully freed an 11-year-old girl who got her lip trapped while trying to scan an image of her face into a computer.

BOTH Morocco and Spain, encouraged by General Colin Powell, the secretary of state of the United States, undertook not to return troops to the barren islet of Perejil, which had been alternately occupied by both countries since the end of June. An Israeli jet attacked a building in Gaza, killing the leader of Hamas, the Islamist terror group, but also killing 14 civilians including nine children. Earlier, Israel had arrested 21 members of the families of two wanted Palestinian militants in the West Bank and proposed exiling them to the Gaza Strip, but changed its mind after legal representations. Ten weeks before a general election, Chancellor Gerhard Schroeder of Germany sacked his defence minister, Rudolf Scharping, over a money scandal. Greek police arrested members of the November 17 terrorist group, which was responsible for murdering Stephen Saunders, the British defence attaché in Athens, two years ago. The Indian parliament elected as the nation's President Mr A.P.J. Abdul Kalam, a Muslim, but also the man who developed the country's nuclear armaments, An Iranian convicted of murdering his nephew in Mashhad was sentenced to execution by being thrown from a cliff in a sack. In western Uganda, a petrol tanker careered downhill, crashed into a bus and burst into flames, killing 60. Seven people were killed by hailstones in the central Chinese city of Zhenghou during a storm that claimed another 15 lives. Stuttgart firemen lowered a 47-stone man from a window by crane to take him to hospital. CSH