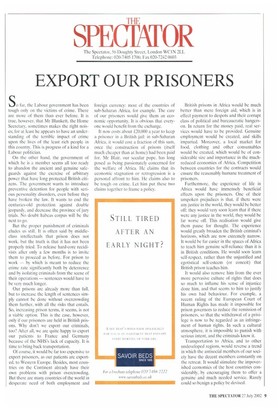 S o far, the Labour government has been tough only on the victims of crime. There are more of them than ever before. It is true, however, that Mr Blunkett, the Home Secretary, sometimes makes the right noises; for at least he appears to have an understanding of the terrible impact of crime upon the lives of the least rich people in this country. This is progress of a kind for a Labour politician.

On the other hand, the government of which he is a member seems all too ready to abandon the ancient and genuine safeguards against the exercise of arbitrary power that have long protected British citizens. The government wants to introduce preventive detention for people with serious personality disorders, even before they have broken the law. It wants to end the centuries-old protection against double jeopardy, and decrease the province of jury trials. No doubt habeas corpus will be the next to go.

But the proper punishment of criminals eludes us still. It is often said by middleclass intellectuals that prison does not work, but the truth is that it has not been properly tried. To release hard-core recidivists after only a few months is to invite them to proceed as before. For prison to work — by which is meant to reduce the crime rate significantly both by deterrence and by isolating criminals from the scene of their operations — sentences would have to be very much longer.

Our prisons are already more than full, but to increase the length of sentences simply cannot be done without overcrowding them further, with all the risks that entails. So, increasing prison terms, it seems, is not a viable option. "This is the case, however, only if our prisoners are held in British prisons. Why don't we export our criminals, too'? After all, we are quite happy to export our patients to France and Germany because of the NHS's lack of capacity. It is time to bring back transportation.

Of course, it would be far too expensive to export prisoners, as our patients are exported, to Western Europe. Besides, most countries on the Continent already have their own problems with prison overcrowding. But there are many countries of the world in desperate need of both employment and foreign currency: most of the countries of sub-Saharan Africa, for example. The care of our prisoners would give them an economic opportunity. It is obvious that everyone would benefit from the exchange.

It now costs about £20,000 a year to keep a prisoner in a British jail: in sub-Saharan Africa, it would cost a fraction of this sum, once the construction of prisons (itself much cheaper than at home) had been paid for. Mr Blair, our secular pope, has long posed as being passionately concerned for the welfare of Africa. He claims that its economic stagnation or retrogression is a personal affront to him. He claims also to be tough on crime. Let him put these two claims together to frame a policy. British prisons in Africa would be much better than mere foreign aid, which is in effect payment to despots and their corrupt class of political and bureaucratic hangerson. In return for the money paid, real services would have to be provided. Genuine employment would be created, and skills imparted. Moreover, a local market for food, clothing and other consumables would he created, which would be of considerable size and importance in the muchreduced economies of Africa. Competition between countries for the contracts would ensure the reasonably humane treatment of prisoners.

It would also remove him from the ever more pervasive culture of rights that does so much to inflame his sense of injustice done him, and that seems to him to justify his own bad behaviour. For example, a recent ruling of the European Court of Human Rights has made it impossible for prison governors to reduce the remission of prisoners, so that the withdrawal of a privilege is now to be regarded as an infringement of human rights. In such a cultural atmosphere, it is impossible to punish with serious intent, and the criminals know it.

Transportation to Africa, and to other undeveloped regions, would reverse a trend in which the antisocial members of our society have the decent members constantly on the retreat. It would stimulate the impoverished economies of the host countries considerably, by encouraging them to offer a genuine and much needed service. Rarely could so benign a policy be devised.