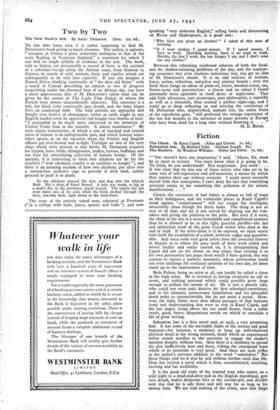 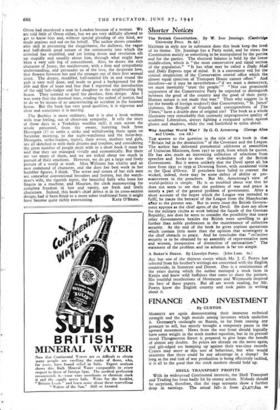 The Beehive. By Winifred Williams. (Faber and Faber. 7s. 6d.) " ' You mustn't have any inspiration,' I said. Music, Sir, must be as exact as science. You must know what it is going to be. To think, do you understand? Not inspiration. Just work.' . . . It was clear that he was one of those artists who take art to be some sort of self-expression and self-assertion, a means by which they express their ego without restraint. I could never reconcile myself with that conception; I can't deny the fact that everything personal seems to me something like pollution of the artistic manifestation. . . ."

Clearly the correction of bad habits is almost as full of traps as their indulgence, and the vulnerable places in Karel Capek's stand against " temperament " will not escape the intelligent, attractively clean though his thesis looks. The thing is not so easy as all that, and art is not served by shutting out the risk- takers and giving the platform to the prim. But even if it were, the cheat in the arts is a more formidable and complicated creature than he is allowed to be in this light, graceful parable—the last and unfinished work of the great Czech writer who died at the end of 1938. If the artist-cheat is to be exposed, we must surely start from the assumption of a talent, however vulgar and question- able. And since some very great artists have left posterity forever in dispute as to where the pure truth of their work ended and where facility and vanity carried on, it is disappointing that Capek did not set his theme on that plane, thus relating it to his own provocative last pages from which I have quoted, but was content to expose a pathetic nonentity, whose pretensions could not even challenge the confused opinions of his own day, let alone stand up to the examination of time.

Beda Folten, being no artist at all, can hardly be called a cheat in the high sense. He is revealed as having creatively no self to assert, and nothing personal which could possibly grow large enough to pollute the stream of art. He is just a ghastly joke, who could not even truly deceive his first schoolgirl-sweetheart, and so his ultimate, unnecessary humiliation and his miserable death make us uncomfortable, but do not point a moral. How- ever, the light, bitter story does afford passages of that humane irony and understanding that were so rich in Karel Capek, and the last pages, rising above the too small theme, form a noble credo, good, brave, disputatious words on which to conclude a life of great writing.

Salutation Inn is a first novel and, as such, a very promising find. It has some of the inevitable faults of the serious and good beginner—for instance, a tendency to heap up well-observed physical detail at the wrong moment, detail which an experienced writer would sacrifice to the necessity to engage the reader's emotion sharply, without fuss. Also there is a tendency to spread the plot ineffectively here and there, risking the conceptual form which in its essentials is very good. And there are such trifles as the author's nervous addition to the word " commence." But these things said let it also be said without further cavil that Mr. Gray has written a novel which is firm, unsentimental, touching, exciting and has credibility.

It is the good old story of the wanted man who comes on a wild night to a dead-and-alive pub in the English marshland, gets very drunk, makes desperate love to the servant-girl, and decides next day that he is safe there and will stay for as long. as his money lasts. We are told nothing of the crime, save that Inigo

Orton had murdered a man in London because of a woman. We are told little of Orton either, but we are very skilfully allowed to get to know him and, without special pleading of any kind, are made anxious and sad on his behalf. The author shows consider- able skill in presenting the sluggishness, the dullness, the vague and half-drunk good nature of the community into which the criminal has stumbled, and yet letting doom and revelation silt up stupidly and steadily about him, through what might have been a very safe fog of concealment. Also, he draws the rich character of Jenny, the maidservant, with a firm and sympathetic understanding, and persuades us of the love, the desperate love, that flowers between her and the stranger out of their first sensual craze. The dreary, muddled, half-sozzled life in and round the pub is very well done, and made so good a background for the ebb and flow of hope and fear that I regretted the introduction of the odd lady-lodger and her daughter in the neighbouring big house. They seemed to spoil the desolate, firm design. Also I was sorry that the doomed man, evading the ordeal of justice, had to do so by means of so unconvincing an accident in the haunted house. But the book has very good qualities; it is vigorous and clear and sometimes it is moving.

The -Beehive is more ordinary, but it is also a book written with true feeling, out of observant sympathy. It tells the story of three days in a Yorkshire woollen mill; it cuts across the whole personnel, from the owner, hurrying back from Harrogate (?) to settle a strike and withdrawing there again on Saturday morning, to the night-watchman and the hoist-boy. Managers, strike-leaders, typists, their wives, mothers and girls, are all sketched in with their dreams and troubles, and considering the great number of people dealt with in a short book it must be said that they are managed vividly and economically. But there are too many of them, and we are jerked about too much in pursuit of their emotions. However, we do get a large and lively picture of a world at work. Miss Williams has vitality and an easy command of character, and she does her best work in her humbler figures, I think. The wives and sisters of her rich men are somewhat conventional brooders and fretters, but the watch- man's wife, the tigerish typist, the beautiful Sally who loses her fingers in a machine, and Maurice, the clerk manoeuvring for complete freedom in lust and vanity, are fresh and lively characters. Indeed, this book's chief defect is in its cross-section design; had it been fitted to a more sober traditional form it might have become quite richly entertaining. KATE O'BRIEN.