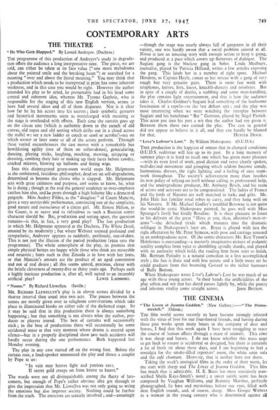 MR. RIC.HARD LLEWELLYN'S play is in eleven scenes divided by a shorter interval than usual into two acts. The pauses between the scenes are mostly given over to telephone conversations which take place in illuminated kiosks on either side of the darkened stage. So it may be said that in this production there is always something happening ; but that something is not always what the author, pro- ducer or players intend. The best of curtains will occasionally stick ; in the best of productions there will occasionally be some accidental noise at that very moment whose drama is erected upon silence—but in a properly disciplined show t.wo such accidents will hardly occur during the one performance. Both happened last Monday evening.

The play in any case started off on the wrong foot. Before the curtain rose, a loud-speaker announced the play and thrust a couplet by Pope at us: "In vain may heroes fight and patriots rave, If secret gold creeps on from knave to knave."

The words were not all distinguishable amOng the flurry of late- comers, but enough of Pope's rather obvious idea got through to give the impression that Mr. Llewellyn was not only going to wring the emotions but also improve society. Nothing could be further from the truth. The emotions are scarcely involved ; and—amazingly

—though the stage was nearly always full of gangsters in all their variety, one was hardly aware that a social problem existed at all. Noose is just an amusing story with enough action to keep it going, and produced at a pace which covers up flatnesses of dialogue. The Sugiani gang is the blackest gang in Soho. Linda Medbury, journalist, played by Patricia Hilliard, writes a few articles exposing the gang. This lands her in a number of tight spots. Michael Hordern, as Captain Hoyle, comes to her rescue with a gang of very rough but very genuine guys. There is some fast work with telephones, knives, fists, knees, knuckle-dusters and revolvers. But in spite of a couple of deaths, a stabbing and some man-handling, the play remains light entertainment, and that is how the audience takes it. Charles Goldner's Sugiani had something of the loathsome fascination of a reptile—to the last defiant spit ; and the play was most interesting when we were watching the interplay between Sugiani and his henchman " Bar " Gorman, played by Nigel Patrick. This actor put into his part a wit that the author had not given it. Between them these two carried the play. The cast in general did not appear to believe in it all, and they can hardly be blamed