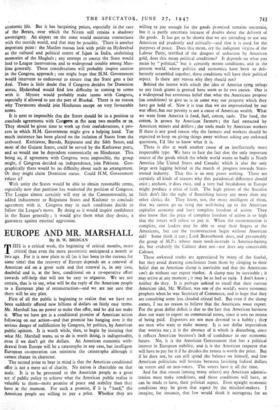 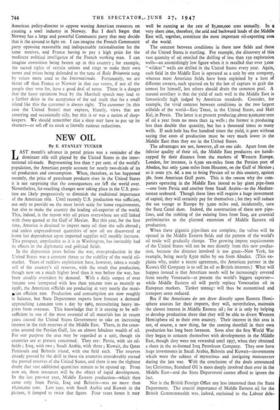 THIS is a critical week, the beginning of critical months, more critical than even the more pessimistic anticipated a month or two ago. For it is now plain to all (as it has been to the curious for some time) that the recovery of Europe depends on a renewal of American aid on a great scale and that renewal is, in any case, doubtful and is, at the best, conditional on a co-operative effort towards self-help that will not be easy to organise. We are not certain, that is to say, what will be the reply of the American people to a European plan of reconstruction—and we are not sure that there will be any plan.

First of all the public is beginning to realise that we have not been suddenly offered new billions of dollars on fairly easy terms. Mr. Marshall has no power to make that offer, and he did not make it. What we have got is a conditional promise of American action following on our action—and that promise has hanging over it the serious danger of nullification by Congress, by politics, by American public opinion. It is worth while, then, to begin by insisting that what Mr. Marshall wants us to do is worth doing, is indispensable, even if we don't get the dollars. An American economic with- drawal from Europe will be a catastrophe in any case, but intelligent European co-operation can minimise the catastrophe although it cannot change its character.

The second point to bear in mind is that the American conditional offer is not a mere act of charity. No nation is charitable on that scale. It is to be presented to the American people as a great act of public policy to achieve what the American public realise is valuable to them—more promise of peace and stability than they have at the moment. For such a promise, if it is "hard," the American people are willing to pay a Price. Whether they are willing to pay enough for the goods promised remains uncertain, but it is partly uncertain because of doubts about the delivery of the goods. It has got to be shown that we are intending to use any American aid prudently and critically—and that it is used for the purposes of peace. Does this mean, cry the indignant virgins of the Labour Party, terrified of the dangers of seduction by American gold, does this mean political conditions? It depends on what you mean by "political," but it certainly means conditions, and in the present world, where politics and economics have been so deli-. berately scrambled together, these conditions will have their political aspect. Is there any reason why they should not?

Behind the horror with which the idea of America tytng strings to any fresh grants is greeted here seem to lie two causes. One is a widespread but erroneous belief that what the Americans propose (on conditions) to give us is in some way our property which they have got hold of. Now it is true that we are impoverished by our war effort, but our poverty is not a cause of American wealth. What we want from America is food, fuel, cotton, tools. The food, the cotton, is grown by American farmers ; the fuel extracted by American miners and drillers ; the tools made by American workers If there is any good reason why the farmers and workers should be expected to keep on giving things away without asking any awkward questions, I'd like to know what it is.

There is also at work another cause of an intellectually more respectable type. We have to face the fact that the only important source of the goods which the whole world wants so badly is North America (the United States and Canada) which is also the only large area lagging behind in the march of progress towards State- owned industry. That this is so may prove nothing. There are certainly all kinds of reasons why this paradoxical difference should exist ; anyhow, it does exist, and a very bad breakdown in Europe might produce a crisis of faith. The high priests of the Socialist faith don't like the sight of flourishing heresy any more than any other clerics do. They know, too, the more intelligent of them, that we cannot go on tying our well-being up to the American capitalist economy and have complete freedom of action. They also know that the price of complete freedom of action is so high that the voters will refuse to pay it. When the reconstruction is complete, our leaders may be able to snap their fingers at the Americans, but can the reconstruction begin without American aid? Some think it can ; Lord Beaverbrook does, and presumably the group of M.P.s whose main stock-in-trade is America-baiting do, but evidently the Cabinet does not—nor does any conceivable Cabinet.

These awkward truths are appreciated by many of the fearful, but they avoid drawing conclusions from them by clinging to their belief that an American slump is inevitable and that the Americans can't do without our export market. A slump may be inevitable ; it may arrive at any moment ; it may be as bad as 1929. I don't know ; neither do they. It is perhaps unkind to recall that their current American idol, Mr. Wallace, was one of the world's worst economic prophets when he was Secretary of Commerce, and to hope that they are consulting some less clouded crystal ball. But even if the slump comes, I see no reason to believe that the Americans must export. For the great dollar deficit is due to the fact that American business does not want to export on commercial terms, since it sees no means of being paid. Exporters are not men devoted to a hobby ; they are men who want to make money. It is not dollar imperialism that worries me ; it is the absence of it which is disturbing, since it reflects American business's lack of confidence in our economic future. No, it is the American GoVernment that has a political interest in European stability, and it is the American taxpayer that will have to pay for it if he decides the return is worth the price. But if he does not, he can still spend the balance on himself, and few American politicians will hesitate between lavishing federal dollars on voters and on non-voters. The voters have it all the time.

And for that reason (among many others) any American adminis- tration must make conditions, and those conditions will have, or can be made to have, their political aspect. Even straight economic conditions may be given that aspect by the mischief-makers. I imagine, for instance, that few would think it outrageous for an

'American policy-director to oppose wasting American resources on .creating a steel industry in Norway. But I don't forget that 'Norway has a large and powerful Communist party that may decide 'that is the ground to fight on. I can imagine the French Communist party opposing reasonable and indispensable rationalisation for the ,same motives, and France having to pay a high price for the mediocre political intelligence of the French working man. I can imagine opposition being beaten up in this country ; for example, the sacred rights of certain unions and rings to make their own .terms and prices being defended to the tune of Rule Britannia sung by voices more used to the Internationale. Fortunately, we are better off than France or Norway in that our voters, if not all the people they vote for, have a good deal of sense. There is a danger that the hasty optimism bred by the Marshall speech may lead to a further delay in the acceptance of the sad truth that for a small island like this the customer is always right. The customer (in this case the United States) may express, bluntly, views that are annoying and occasionally silly, but this is or was a nation of shop- keepers. We should remember that a shop may have to put up its shutters—or sell off its stock at literally ruinous reductions.