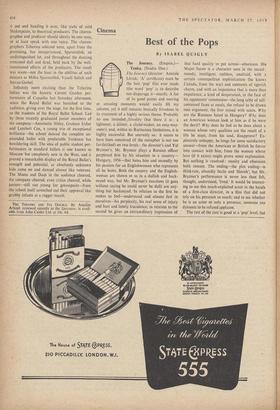 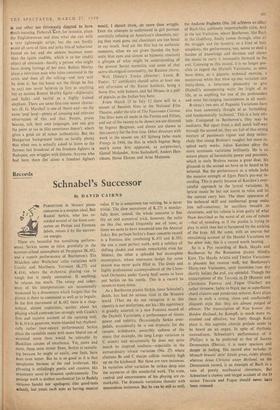 Best of the Pops

By ISABEL QUIGLY The Journey. (Empire.)— Tonka. (Studio One.) The Journey (director : Anatole Litvak; 'A' certificate) must be the best `pop' film ever made (the word 'pop' is to describe not disparage it—much). A list of its good points and moving or amusing moments would easily fill, my column, yet it still remains basically frivolous in its treatment of a highly serious theme. Probably no one intended ti frivolity (but there it is: a lightener, a diluter, a cliche-maker, an easy-way- outer); and, within its Ruritanian limitations, it is highly successful. But unevenly so: it seems to have been conceived (if the metaphor is not too far-fetched) on two levels: the director's and Yul Brynner's. Mr. Brynner plays a Russian officer perplexed first by his situation in a country— Hungary, 1956—that hates him and secondly by his passion for an Englishwoman who represents all he hates. Both the country and the English- woman are shown to us in a dullish and hack- neyed way, but Mr. Brynner's reactions (it goes without saying he could never be dull) are any- thing but hackneyed. In relation to the first he makes us feel—understand and almost feel in ourselves—his perplexity, his real sense of injury and hurt and lonely truculence; in relation to the second he gives an extraordinary impression of that hard quality to put across—obsession. His Major ..Surov is a character seen in the round : moody, intelligent, ruthless, unafraid, with a certain cosmopolitan sophistication (he knows Canada, from the war) and moments of tigerish charm, and with an impatience that is more than impatience, a kind of desperation, in the face of his opponents' remoteness—the long table of self- contained faces at meals, the refusal to be drawn into argument, the fear mixed with scorn. Why are the Russians hated in Hungary? Why does an American woman look at him as if he were the devil? Why does he feel as he does about a woman whose very qualities are the result of a life he must, from his soul, disapprove? Ex- plosively unhappy, he longs for some satisfactory answer—from the American or British he forces into contact with him, from the woman whose love (if it exists) might prove some explanation. But aothing is resolved : enmity and obsession both remain. The ending—the plot ending—is third-rate, absurdly facile and 'filmish'; but Mr. Brynner's performance is never less than felt, thought, understood, 'lived.' It would be interest- ing to see this much-exploited actor in the hands of a first-class director, in a film that did not rely on his presence so much; and to see whether he is an actor or only a presence, someone too dynamic to be refused applause.

The rest of the cast is good at a `pop' level, but at any other too frivolously ditected to have Much meaning. Deborah item for instance, plays the Englishwoman and does what she can with a very lightweight script; but she can hardly avoid all sorts of false and jerky bits of behaviour foisted on her and she seldom becomes more than the (quite credible, which is to her credit) object of obsession—hardly a person who might have strong feelings of her own. Robert Morley plays a television man who takes command in the crisis and does all the talking--and very well he does it; but (so banal are the things he has to say) one never believes in him as anything but an outsize Robert Morley figure—diplomatic and bulky and tactful as a highly trained elephant. There are some first-rate minor charac- ters (E. G. Marshall is one of them) and—on the same 'pop' level—plenty pf amusing and relevant observation of this _ and that. People, praise heaven, talk their own languages, and one gets the point or (as in life) sometimes doesn't, which gives a good air of minor authenticity. But the Hungarian background looks so luridly phony that when one is actually asked to listen to the famous last broadcast of the freedom fighters in Budapest, one wriggles with distaste. Anyone who had been there (let alone a freedom fighter) would, I should think, do more than wriggle. Even the attempts to understand (a girl partisan scornfully refusing an American's chocolate, say- ing they want guns, not chocolate) are too banal to say much. And yet the film has its authentic moments, when we are given (besides the hyp- notic blue eyes and almost as hypnotic cranium) a glimpse of what might be understanding of the present Soviet mentality and some of that supra-ideological commodity, the Russian charm.

Walt Disney's Tonka (director : Lewis R. Foster; 'U' certificate) should solve at least one wet afternoon of the Easter holidays, being a horse film, with Indians, and Sal Mineo, in a pair of pigtails. as the Indian boy hero.

From March 25 to July 12 there will be a season of Swedish films at the National Film Theatre, under the title of The Passionate Cinema. The films were all made in the Forties and Fifties, and out of the twenty to be shown ten are directed by Ingmar Bergman, and eleven are shown in this country for the first time. Other directors with work in the season are Alf Sjoberg (who made Frenzy in 1944, the film in which Ingmar Berg- man's name first appeared, as scriptwritei), Gustaf Molander, Arne Sucksdorff, Anders lien- rikson, Hesse Ekman and Arne Mattsson.