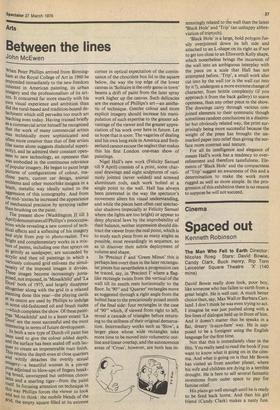 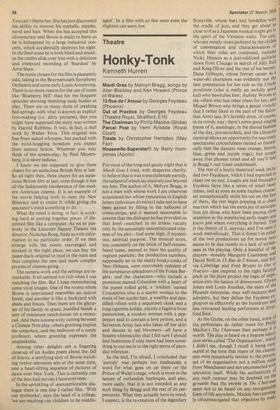 Leicester Square Theatre 'X' (140 mins) David Bowie really does look, poor boy, like someone who has fallen to earth from a great height. He is well cast. A much better choice than, say, Max Wall or Barbara Cartland. I don't think he was even trying to act. I imagine he was just pushed along with a few lines of dialogue held up in front of him. And it doesn't matter that he speaks in a flat, dreary 'it-says-here' way. He is supposed to be a foreigner using the English language for the first time. Not that this is immediately clear in the film. You really need to read the book if you want to know what is going on in the cinema. And what is going on is that Mr Bowie has visited us from another planet, where his wife and children are dying in a terrible drought. He is here to sell several fantastic inventions from outer space to pay for famine relief.

His plans go well enough until he is ready to be fired back home. And then his girl friend (Candy Clark) makes a nasty fuss. You can't blame her. She has just discovered his ability to remove his eyeballs, nipples, navel and hair. When she has accepted this idiosyncrasy and Bowie is ready to leave us he is kidnapped by a large industrial con cern, which accidentally destroys his sight. In the final scene he is both blind and drunk, as the credits slide over him with a delicious and irrelevant recording of 'Stardust' by Artie Shaw.

The music chosen for the film is pleasantly odd, taking in the Bournemouth Symphony Orchestra and some early Louis Armstrong.

There is no more reason for the use of tunes like 'Blueberry Hill' than for the frequent episodes showing threshing nude bodies at play. There are so many shots of creaking bed-springs, with what is known as explicit love-making (i.e. dirty pictures), that you might have supposed the story was written by Harold Robbins. It was, in fact, a dull work by Walter Tevis. This original was free from naked whoopee, but packed with the mind-boggling boredom you expect from science fiction. Whatever you may think of the screen-play, by Paul Mayersberg, it is never tedious.

I know we are supposed to give three cheers for an audacious British film at last.

So all right then, three cheers for an auda cious British film at last; even though it has all the fashionable incoherence of the mod ern American cinema. It is an example of the movie helping both to meet the New Illiteracy and to create it, while giving the spectator's mind something to do.

What the mind is doing, in fact, is working hard at putting together pieces of dis

jointed film like a computer. As we sit pas sively in the Leicester Square Theatre the director, Nicholas Roeg, feeds us with infor mation in no particular order. If we then emerge with the events rearranged and stacked in the right place, we can buy the paper-back original to read in the train and thus complete the new and more complex process of cinema-going.

The camera-work and the settings are remarkable. It all seemed too rich when I was watching the film. But I keep remembering some vivid images. One of the rooms where Bowie is imprisoned resembles an indoor forest, and another is like a backyard with sheds and fences. Then there are the glimpses of his family in space, huddled beside a sort of miniature ranch-house on a mono rail. And there is some witty cutting between a Chinese Noh play, where grunting implies the unspoken, and the bedroom of a randy professor, where grunting expresses the unspeakable.

Among other delights are a lingering close-up of an Auden poem about the fall of Icarus, a terrifying shot of Bowie watching twelve television sets at the same time, and a heart-lifting sequence of pictures of dawn over New York. This is certainly one of the best bad movies I have ever seen.

In the sprinkling of unexceptionable dialogue there is one line I rather like. 'With our textbooks', says the head of a college, 'we are teaching our children to be middle aged'. In a film with so few mots even the slightest can seem bon.