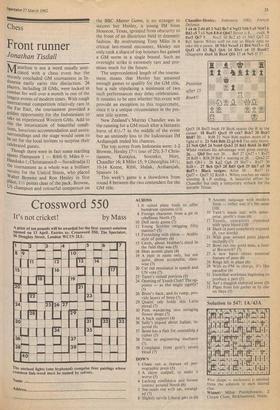 Marathon is not a word usually asso- ciated with a chess event but the recently concluded GM tournament in In- donesia easily earns this distinction. 26 Players, including 18 GMs, were locked in combat for well over a month in one of the longest events of modern times. With tough international competition relatively rare in the Far East, the tournament provided a golden opportunity for the Indonesians to take on experienced Western GMs. Add to this the intoxication of beautiful condi- tions, luxurious accommodation and exotic surroundings and the stage would seem to be set for the local invitees to surprise their celebrated guests. Though there were in fact some startling upsets (Sampouw 1 — Ribli 0; Miles 0 Handoko 1; Christiansen 0— Suradiradja 1) the tournament as a whole was a brilliant success for the United States, who placed Walter Browne and Ron Henley in first Plant 11/2 points clear of the pack. Browne, US champion and colourful competitor on the BBC Master Game, is no stranger to success but Henley, a young IM from Houston, Texas, sprinted from obscurity to the front of an illustrious field in dramatic fashion. By overrunning Tony Miles in a critical last-round encounter, Henley not only took a share of top honours but gained a GM norm in a single bound. Such an overnight strike is extremely rare and pro- mises much for the future.

The unprecedented length of the tourna- ment means that Henley has amassed enough games to qualify for the GM title, but a rule stipulating a minimum of two such performances may delay celebrations. It remains to be seen whether this event will provide an exception to this requirement, since it is a unique circumstance in the pre- sent title system.

New Zealand's Murray Chandler was in the running for a GM result after a fantastic burst of 61/2/7 in the middle of the event but an untimely loss to the Indonesian IM Ardiansjah ended his chances.

This week's game is a showdown from round 8 between the two contenders for the GM title.