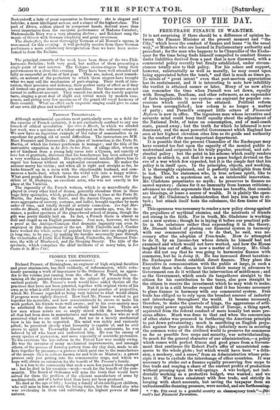 Richard Prosser, of Birmingham, an engineer of high original faculties and great attainments, has died suddenly, of inflammation, while sedu- lously pursuing a work of importance to the Ordnance Board, an appen- dix to the volume just issuing from the office of Mr. Woodcraft, con- taining all the patented inventions on the subject of gunnery from the earliest periods. Mr. Prosser's work would have added thereto all the practices that have not been patented, together with original views of his own SS to what is still required in the science and practice of projectiles, which Mr. Prosser regarded as being very inferior to what would obtain if progress were rightly directed. How hard Mr. Prosser worked to get together his materials, and how conscientiously he strove to make his work perfect, his friends were well aware; and to his over-anxiety may be attributed the disease that so suddenly laid him low. There are few men whose minds are so amply stored with the knowledge of all that had been done in manufactures and machinery, few who so well perceived what we are still lacking. And not in a merely mechanical view is his loss to be regretted. His mind was richly and variously gifted ; he perceived clearly what humanity is capable of, and he ever strove to uplift it. Thoroughly liberal in all his sentiments, he was beloved by all who knew and understood him. He was the enemy of every species of pretension, and more especially of scientific pretension. To his exertions the late reform in the Patent Law was mainly owing. Be was the inventor of many mechanical improvements, and amongst others, of the process of forming pottery from dry clay dust, made to ad- here together by pressure,—a process which gave rise to the manufacture of the mosaic tiles in colours known far and wide as Minton's; a patent process only just getting into the remunerative stage, and which we hope will obtain an extension for the benefit of Mr. Prosser's family.

; but he died in his vocation—work—work for the benefit of the com- munity. The Board of Ordnance will miss the brain that would have solved for them the problem of the efficient manufacture of arms by machine-tools, and of a better kind than have yet been produced. He died at the age of fifty ; leaving a family of six intelligent children, who will Miss in him not only the loving father, but the friend also who was awakening in them and cultivating the highest powers of their natures.