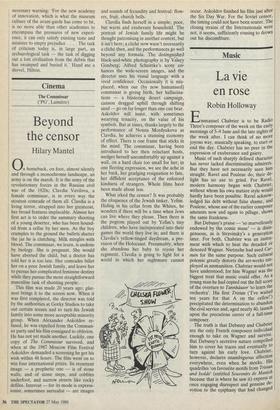 On horseback, on foot, almost silently and through a monochrome landscape, an army is on the march. It is the army of the revolutionary forces in the Russian civil war of the 1920s; Clavdia Vavilova, a female commissar, is in every way the stoutest comrade of them all. Clavdia is a living terror, strapped into her greatcoat, her broad features implacable. Almost her first act is to order the summary shooting of a young deserter, who has been hound- ed from a cellar by her men. As the boy crumples to the ground the bullets shatter the jar he is clutching. Milk mingles with blood. The commissar, we learn, is undone by biology. She is pregnant. She would have aborted the child, but a doctor has told her it is too late. Her comrades billet her on a poor Jewish family, and leave her to pursue her complicated feminine destiny while they pursue the more straightforward masculine task of shooting people.

This film was made 20 years ago; glas- nost brings it to the screen now. When it was first completed, the director was told by the authorities at Gorky Studios to take out certain scenes and to turn his Jewish family into some more acceptable minority group. When Alexander Askoldov re- fused, he was expelled from the Commun- ist party and his film consigned to oblivion. He has not yet made another. Luckily, one copy of The Commissar survived, and when at the 1987 Moscow Film Festival Askoldov demanded a screening he got his wish within 48 hours. The film went on to win four international prizes. Its recurrent image — a prophetic one — is of stone walls; and of stone steps, and cobbles underfoot, and narrow streets like rocky defiles. Intercut — for its mode is express- ionist, sometimes surrealist — are images

Clavdia finds herself in a simple, poor, but warm and exuberant household. The portrait of Jewish family life might be thought patronising in another context, but it isn't here; a cliché now wasn't necessarily a cliche then, and the performances go well beyond any formula. The distinguished black-and-white photography is by Valery Ginsberg; Alfred Schnittke's score en-- hances the wide-screen images, and the director uses his visual language with a vivid confidence. Occasionally it is mis- placed; when our (by now humanised) commissar is giving birth, her hallucina- tions — a blistering desert campaign, cannon dragged uphill through shifting sand — go on far longer than one can bear. Askoldov will insist, with sometimes wearying tenacity, on the value of his symbols. But at times, thanks largely to the performance of Nonna Mordyukova as Clavdia, he achieves a stunning economy of effect. There is one frame that sticks in the mind. The commissar, having been introduced to her then reluctant hosts, wedges herself uncomfortably up against a wall, on a hard chair too small for her; in one fleeting expression, we see the ache in her back, her grudging resignation to fate, her diffident acceptance of the enforced kindness of strangers. Whole films have been made about less.

What irked the censor? It was probably the eloquence of the Jewish tinker, Yefim. Hiding in his cellar from the Whites, he wonders if there will be a time when Jews can live where they please. Then there is the pogrom played out by Yefim's tiny children, who have incorporated into their games the world they live in; and there is Clavdia's yellow-tinged daydream, a pre- vision of the Holocaust. Presumably, when she abandons her baby to rejoin her regiment, Clavdia is going to fight for a world in which her nightmare cannot occur. Askoldov finished his film just after the Six Day War. For the Soviet censor, the timing could not have been sourer. The closing strains of the Internationale were not, it seems, sufficiently rousing to drown out his discomfiture.