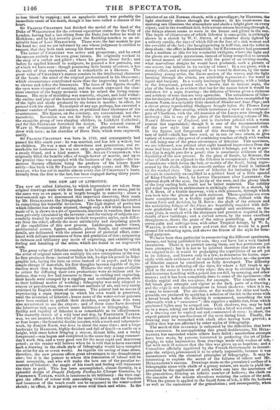 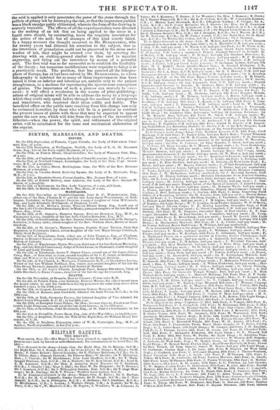 THE NEW ART OF LITHOTINT.

THE new art called Lithotint, by which impressions are taken from original drawings made with the brush and liquid ink on stone, just in the same way as on paper, is at length brought to maturity : about a twelvemonth ago we announced this important discovery, then made by Mr. H1TLLMANDEL the lithographer ; who has employed the interval in completing his beautiful invention. The high degree of perfection which lithotint has already attained, though only a few trials have been made of it, is shown in a set of specimens, nineteen in number, that have been privately circulated by the inventor ; and the variety of subjects suc- cessfully treated by several artists in their respective styles, each differ- ent from the other, affords the most satisfactory and surprising proofs of the capabilities of this new process. Landscapes, marine views, architectural scenes, figures, animals, plants, fossils, and ornamental details, are delineated with the utmost power of pictorial effect, com- bined with delicate minuteness of form and gradation of tint ; surpassing in richness and brilliancy any mode of engraving, and exhibiting the feeling and handling of the artiste which are found in no engraver's work.

The great value of lithotint consists in its being a medium by which the artist of original talent can multiply his own conceptions in the way he first produced them: instead of Indian ink, he dips his pencil in litho- graphic ink, laying the tints on stone instead of on paper ; and by this simple change of materials, his first thoughts become capable of repro- duction more than a thousandfold. Hitherto the only means available to artists for diffusing their own productions were so tedious and la- borious, that very few had recourse to them : in etching and engraving, their hands were cramped by a niggling and mechanical process, alien to their habitual modes of working ; lithography was only adapted to crayon or pen-drawing, the two slowest methods of art, and very rarely practised by English artists of eminence. The painter had no means of reproducing a sepia drawing in which his own touch is preserved, until the invention of lithotint ; hence none of the water-colour painters have been enabled to publish their sketches, except those who were also accustomed to use the crayon ; and of these some have devolved the laborious task upon artists more habituated to lithography. The facility and rapidity of lithotint is as remarkable as its effectiveness. The masterly sketch of a wild boar and dog, by FREDERICK TAYLER, was, we are assured, a first trial of the material, and dashed off in three or four hours ; the beautiful Gothic interior, with a tomb and tabernacle- work, by JOSEPH NAsH, was done in about the same time ; and a large landscape by HARDING, highly-finished and full of detail—a castle on a height, with trees below fringing a stream, distant hills, and a rocky foreground—was begun and completed in the same day : a long summer- day's work this, and a very good one for the most rapid and dexterous pencil ; as the reader will believe when he is told that to have executed such a drawing in the chalk style of lithography would have occupied the artist for six or seven weeks. As regards the saving of time alone, therefore, the new process offers great advantages to the draughtsman also ; but it is the painter to whom this diminution of labour will be most acceptable, and who will make the best use of the peculiar re- sources of lithotint : the magic of his touch and feeling will transmute the tints to gold. This has been accomplished, almost literally, in a splendid design of Dugald Dalgetty Feeding his Charger Gustavus, by FREDERICK TAYLEB, which is luminous in its brilliancy : the tints sug- gest the effect of colour with astonishing vividness, and the freedom and looseness of the touch could not be surpassed in the water-colour sketch ; in effect, it is painting on stone with black and white. In the interior of an old Norman church, with a gravedigger, by Hasinsa, the light absolutely shines through the window • in his coast-scene the morning sun illumines the atmosphere and sheds a bright glow on every

object; and in the woodland dell, with a trout-stream brawling through it, the foliage almost seems to wave in the breeze and glitter in the sun. The depth of chiaroscuro of which lithotint is susceptible is strikingly shown in a sketch by W. C. SMITH, of a chamber dimly lighted by a solitary candle, the rays of which fall on the face of a sick woman and