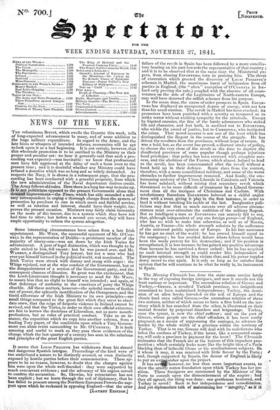 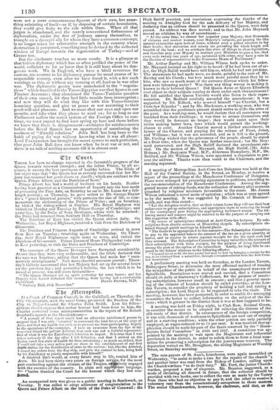 Page 1, 27 November 1841 — The Morning Chronicle has done the state some service lately
Close

The Morning Chronicle has done the state some service lately

in the way of exposing foreign intrigues, and now it unveils not the least curious or important. The anomalous relation of Greece and Turkey,—Greece, a revolted Turkish province, too insignificant unassisted to have maintained independence ; Turkey, the domi- nion of an alien horde, intruded on the soil of Europe and the classic land once called Greece,—the anomalous relation of these two nations, neither of which seems to have a firm bold on the ter- ritory which it has snatched from the other, is illustrated on their mutual frontier by perpetual disorders and brigandage. Turkey, once the tyrant, is now the chief sufferer ; and on the part of Greece, whose people are the chief offenders, it has been coolly proposed, as a means of suppressing the outrages, to advance its border by the whole width of a province within the territory of Turkey. That is to say, Greece will deal with its malefactors who infest the confines of Turkey, if the latter, like a conquered coun- try, will cede a province in payment for the boon! The Chronicle insinuates that the French are at the bottom of this impudent pro- position ; which certainly looks more like the bright idea of a Paris blackleg than of imbecile OTHO or his semibarbarous subjects. Be it whose it may, it was received with little favour by the Porte ; and, though supported by Russia, the demur of Englantlia likely

to put an ex uisher upon the project. It has se however, no less than more important events, to

show the utter y rotten foundation upon which Turkey has her po- sition. Three foreigners are summoned by the Minister of the Porte to consult upon the dismemberment of the empire : had they all agreed, the thing was done : one gentleman hesitated, and Turkey is saved ! Such is her independence and consolidation. And yet diplomatists talk of maintaining her " integrity," as if it were not a mere consentaneous figment of their own, but some- thing subsisting of itself—as if, by disposing of certain boundaries, they could give fixity to the rule within them. When all that jargon is abandoned, and the merely conventional forbearance of diplomatists, under the fear of jealousy among themselves, to trample on a decrepid ally for whom they have a common contempt, is no longer taken for substantive strength in the country whose destruction is postponed, something may be devised by the collected wisdom of Europe towards the regeneration of Turkey—and of Greece too.

But the disclosure touches us more nearly. It is a glimpse at that hidden diplomacy which has so often perilled the peace of the world, sufficieut to let us know that it is still busy about its dan- gerous work. We in England, who have a blind reverence for custom, are content to let diplomacy pursue its usual course of ir- responsible secrecy, even after we have found it, with a few such warnings as this, or without any warning at all, land us in war after war. The diplomatic gentry were unmolested in the " negotia- tions" which fructified in the Turco-Egyptian war that figures in our Finance Accounts ; they abandoned the Turco-Tunisian question of their own accord, for they had little trouble from interruption ; and now they will do what they like with this Turco-Grecian boundary question, and give us peace or war according to their good-will and pleasure. And we must shut our eyes and open our mouths, and take what they please to send us ; for as long as our Parliament suffers the secret system of the Foreign Office to con- tinue, we must expect to find wars spring up here and there before we know that there is disagreement—estimates for reinforcements before the Royal Speech has an opportunity of mentioning the coolness of "friendly relations." John Bull has long been in the habit of paying for war without knowing what it was all about : Lord PALMERSTON has brought the secret system to such perfection, that poor John Bull does not know when he is at war or not, and there is no talk of settling accounts till it is almost over.