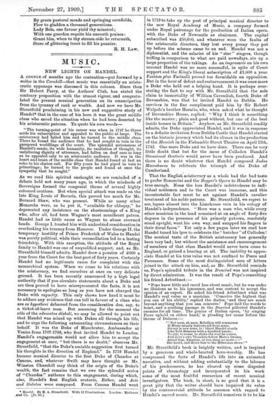 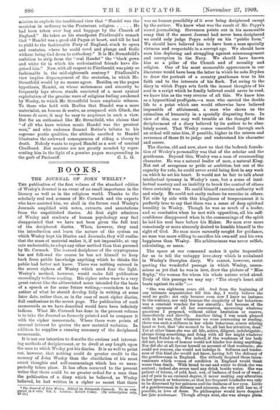 A. COUPLE of months ago the contention—put forward by a writer in the Cornhill—that music was essentially an aristo-

cratic appanage was discussed in this column. Since then Sir Hubert Parry, at the Authors' Club, has stated the contrary proposition with the utmost vigour, and congratu- lated the present musical generation on its emancipation from the tyranny of rank or wealth. And now we have Mr. Streatfeild proclaiming in his new and suggestive study of Handel* that in the case of his hero it was the great middle class who saved the situation when he had been deserted by his aristocratic patrons. To quote his own words-

" The turning-point of his career was when in 1747 he threw aside his subscription and appealed to the public at large. The -aristocracy had failed him and he turned to the middle class. There he found the audience that he bad sought in vain in the pampered worldlings of the court. The splendid seriousness of ders music, its wide humanity, its exaltation of thought, its unfaltering dignity of utterance, had fallen on deaf ears so long

as he appealed only to an aristocratic audience. It was in the heart and brain of the middle class that Handel found at last an echo to his clarion call. For fifty years he had piped in vain to princelings ; he turned to the people and found at once the sympathy that he sought."

As we read this spirited onslaught we are reminded of a debate held not many years ago, in which the misdeeds of Sovereigns formed the congenial theme of several highly coloured orations. But when special attack was made on the late King Louis of Bavaria, this proved too much for Mr.

Bernard Shaw, who was present. While so many other Monarchs were, as he put it, " available for obloquy," he deprecated any insistence on the shortcomings of a King who, after all, had been Wagner's most munificent patron. Handel had as little cause as Wagner to abuse crowned heads. George I. treated him with undoubted consideration in overlooking his truancy from Hanover. Under George II. the temporary hostility of Prince Frederick of Wales to Handel was purely political, while their reconciliation led to a lasting 'friendship. With this exception, the attitude of the Royal family to Handel was one of unqualified support, and, as Mr. Streatfeild himself admits, Handel drew a pension of £600 a year from the Court for the best part of forty years. Certainly Handel had no legitimate cause for complaint with the monarchical system. When we come to his relations with the aristocracy, we find ourselves at once on very delicate ground. It has been recently announced by a high legal authority that if you circulate statements about a Duke and are then proved to have misrepresented the facts, it is not necessary to apologise so long as you have not charged the Duke with rapacity. This only shows how hard it must be to adduce any evidence that can tell in favour of a class who are as hypothesi debarred from the consideration due, say, to a ticket-of-leave man. But assuming for the moment the role of the advocatus diaboli, we may be allowed to point out that Handel was mixed up with Dukes all through his life, and to urge the following extenuating circumstances on their behalf. It was the Duke of Manchester, Ambassador at

-Venice from 1707-1703, who -first invited Handel 'to Loudon. Handers engagements would not allow him to accept the engagement at once, " but there is no doubt," observes Mr. Streatfeild, "that the Duke's amiable suggestion first turned his thoughts in the direction of England." In 1718 Handel became musical director to the first Duke of Chandos at Canons, and, whatever Swift may have thought or Mr. Winston Churchill may think of the origin of the Duke's -wealth, the fact remains that we owe the splendid series

of " Chandoa " anthems to this engagement, during which, also, Handel's first English oratorio, Esther, and Ads and Galatea were composed. From Canons Handel went

• Handel. By R. A. Streatfeild. With 12 Illustrations. London: Methuen -and Co. [7s. 6d.] in 1719 to take up the post of principal musical director to the new Royal Academy of Music, a company formed under Royal patronage for the production of Italian opera,

with the Duke of Newcastle as chairman. The capital subscribed was £50,000, and whatever were the faults of the aristocratic directors, they lost every penny they put up before the scheme came to an end. Handel was not a diplomatist, and the salaries of his " star " singers, though trifling in comparison to what are paid nowadays, ate up a large proportion of the takings. As an impresario on his own account Handel was no more successful, in spite of Court support and the King's liberal subscription of 21,000 a year. Fashion plus Farinelli proved too formidable an opposition.

But in the hour of defeat and embarrassment it was once more a Duke who held out a helping hand. It is perhaps over- stating the fact to say with Mr. Streatfeild that the sole claim to immortality of William Cavendish, fourth Duke of Devonshire, was that he invited Handel to Dublin. He survives in the fine compliment paid him by Sir Robert Walpole's brother Horatio, who, when asked what he thought of Devonshire House, replied: "Why I think it something like the master ; plain and good without, but one of the best inside houses in Britain." Anyhow, as Mr. Streatfeild readily admits, the Duke appreciated Handel, and it was in response to a definite invitation from Dublin Castle that Handel started on the historic journei.which had its climax in the production of the Messiah in the Fishamble Street Theatre on April 13th, 1742. One more Duke and we have done. There can be very

little doubt that but for the issue of Culloden. Handel's Occasional Oratorio would never have been produced. And

there is no doubt whatever that Handel composed Judas Maccabaeus to celebrate the triumph of the Duke of Cumberland.

That the English aristocracy as a whole had the bad taste to prefer Bononcini and the Beggar's Opera to Handel may be true enough. None the less Handel's indebtedness to indi- vidual noblemen and to the Court was immense, and this incontestable fact must be set against Handers cavalier treatment of his noble patrons. Mr. Streatfeild, we regret to see, lapses almost into the Limehouse vein in his eulogy of Handers independence. " Here was a man who, while every other musician in the land remained at an angle of forty-five degrees in the presence of his princely patrons, resolutely stood upright, went his own way, and snapped his fingers in their ducal faces." Yet only a few pages later we read how Handel tuned his lyre to celebrate the " butcher " of Culloden!

The musical taste of the British aristocracy has generally been very bad ; but without the assistance and encouragement of members of that class Handel would never have come to England, or gained a hearing at all. The inability to appre- ciate Handel at his true value was not confined to Peers and Peeresses. Some of the most distinguished men of letters joined in the attack on him, and, as Mr. Streatfeild reminds us, Pope's splendid tribute in the Dunciad was not inspired by direct admiration. It was the result of Pope's consulting his friend Arbuthnot :—

" Pope knew little and cared less about music, but he was under no illusions as to his ignorance, and was content to accept the opinion of an expert. He asked his friend Arbuthnot what was Handers real value as a musician. `Conceive the highest that you can of his ability,' replied the doctor, 'and they are much beyond anything that you can conceive.' Pope laid the words to heart, and a scathing passage in the Dunciad pilloried Handers enemies for all time.. The genius of Italian opera, ' by singing Peers upheld on either hand,' is pleading her cause before the throne of Dulness :--, " But soon, ah soon, Rebellion will commence If Music meanly borrows aid from sense. Strong in new arms, lo 1 Giant Handel stands Like bold Briareus with a hundred hands ; To stir, to rouse, to shako the soul he comes, And Jove's own Thunders follow Mars's Drums.

• - .Arrest-him, Empress, or you sleep no more--" She heard, and drove him to the Hibernian shore."' Mr. Streatfeild's book is brightly written, and is inspired by a generous and whole-hearted hero-worship. He has compressed the facts' of Handel's life into an animated narrative, and without adding substantially to the labours of his predecessors, he has cleared up some disputed points of chronology and incorporated in his work some of the most fruitful researches of recent musical investigators. The book, in short, is -so good that it is a great pity that the writer should have impaired its value by the controversial attitude he assumes with regard to Handel's sacred music. Mr. Streatfeild conceives it to be his

mission to explode the traditional view that " Handel was the

musician in ordinary to the Protestant religion He had been taken over bag and baggage by the Church of England." He takes as his standpoint FitzGerald's remark that " Handel was a good old Pagan at heart, and till he had to yield to the fashionable Piety of England, stuck to opera and cantatas, where he could revel and plunge and frolic without being tied down to orthodoxy." It is Mr. Streatfeild's ambition to strip from the "real Handel" the "black gown and " white tie in which his ecclesiastical friends have dis- guised him." Now, with all respect to FitzGerald, was piety so fashionable in the mid-eighteenth century P FitzGerald's view implies disparagement of the oratorios, in which Mr. Streatfeild would by no means agree. Besides, on the pagan hypothesis, Handel, on whose seriousness and sincerity he frequently lays stress, stands convicted of a most cynical exploitation of the genuine wave of religious feeling awakened by Wesley, to which Mr. Streatfeild bears emphatic witness. To those who hold with Berlioz that Handel was a mere materialist, an homme de ventre, as compared with Gluck, the homing de eceur, it may be easy to acquiesce in such a view. But for an enthusiast like Mr. Streatfeild, who claims that " of all who have written music Handel was the greatest man," and who endorses Samuel Butler's tribute to his supreme poetic qualities, the attitude ascribed to Handel illustrates the awkward consequences of riding a theory to death. Nobody wants to regard Handel as a sort of musical Chadband. But matters are not greatly mended by repre- senting him in the light of a genuine pagan masquerading in