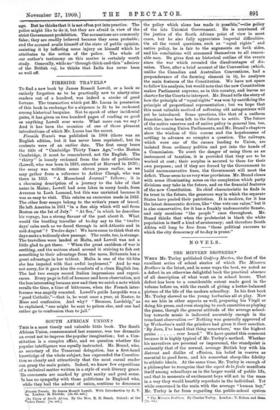 Tins is a most timely and valuable little book. The South African Union, consummated last summer, was too dramatic an event not to impress the popular imagination ; but a Con- stitution is a complex affair, and we question whether the popular intelligence was equally instructed. Mr. Brand, who, as secretary of the Transvaal delegation, has a first-hand knowledge of the whole subject, has expounded. the Constitu- , tion so clearly and attractively that the most casual reader can grasp the main points. Indeed, we know few expositions of a technical matter written in a style of such literary grace. Ws comments are marked by great sanity and good sense. ke has no sympathy with those politicians in England who, while they hail the advent of union, continue to denounce

ccr Union of South Africa. By the Hon. R. H. Brand. Oxford : at the don Press. [6s. net.] the policy which alone has made it possible,"—the policy of the late Unionist Government. He is consinced of the justice of the South African- point of, view in most cases, but he also fully appreciates Imperial difficulties. On all the vexed questions, such as "equal rights" and native policy, he is fair to the arguments on both sides, and his conclusions will commend themselves to all reason- able men. He gives first an historical outline of the events since the war which revealed the disadvantages of dis- union. Then, after a brief account of the Convention (which, unlike the Canadian and Australian Conventions, had a preponderance of the farming element in it), he analyses the main features of the Constitution. We have not space to follow his analysis, but would note that the new Constitution makes Parliament supreme, as in this country, and leaves no charter for the Courts to interpret. Mr. Brand tells the story of how the principle of " equal rights " was won by sacrificing the principle of proportional representation ; but we hope that this most valuable method of softening old antagonisms will yet be introduced. Some questions, like that of a uniform franchise, have been left to the future to settle. The future of the native reserves and of native policy in general lies, too, with the coming Union Parliaments, and Mr. Brand's chapters show the wisdom of this course and the hopelessness of settling in advance so complex a question. The railways, which were one of the causes leading to Union, are isolated from ordinary politics and put into the hands of a Commission. To avert the danger of using them as an instrument of taxation, it is provided that they are to be worked at coat; their surplus is secured to them for their own purposes; and if they are forced by the Government to build unremunerative lines, the Government will meet the deficit. These seem to us very wise provisions. Mr. Brand closes with some illuminating notes on the complexion which party divisions may take in the future, and on the financial features of the new Constitution. Its chief characteristic he finds in its trust in the future, the generous way in which the separate States have pooled their patriotism. It is modern, for it has the latest democratic devices, like" One vote one value," but it is also conservative, for it has a frankly undemocratic Senate, and only mentions " the people " once throughout. Mr. Brand thinks that when the proletariat is black the white population is itself a kind of aristocracy; and therefore South Africa will long be free from "those political excesses to which the city democracy of to-day is prone."