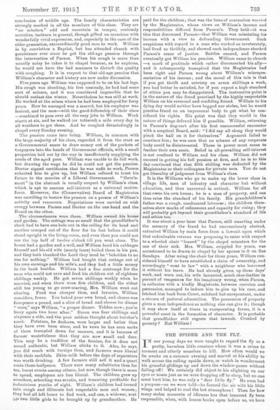 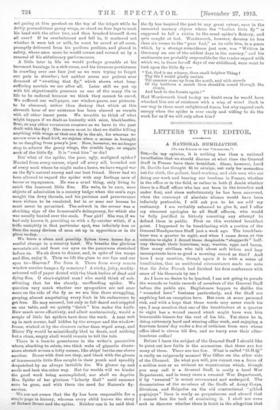 THE SPIDER AND THE FLY.

IN our young days we were taught to regard the fly as a pretty, harmless little creature whom it was a crime to torment and utterly senseless to kill. How often would we lie awake on a summer evening and marvel at his ability to walk across the ceiling upside down, or watch in wonderment his graceful glidings up and down the window-panes without falling off! We certainly did object to his alighting on our eyes or noses just as we were dropping off to sleep, but no one must hurt him, he was only a "dear little fly." He even had a purpose—so we were told—he fanned the air with his little wings and helped to cool the hot atmosphere 1 Then for how many stolen moments of idleness has that innocent fly been responsible, when, with lesson-books open before us, we have

sat gazing at him perched on the top of the inkpot while he deftly preened those gauzy wings, or stood on four legs to wash his head with the other two, and then brushed himself down all over? If he overbalanced and fell in, it mattered not whether it were ink or milk, he must be saved at all costs, promptly delivered from his perilous position, and placed in safety, where once more he would amuse and reward us by a renewal of his ablutionary performances.

A little later in life we would perhaps grumble at his incessant buzzings in a sick-room, and his tiresome persistence in crawling over our face just as we were trying to forget our pain in slumber; but neither nurse nor patient over dreamed of " swatting that fly," which shows what long- sufferieg mortals we are after all. Later still we put up with his objectionable presence as one of the many ills in life to be endured because we think they cannot be cured. We suffered our wall-paper, our window-panes, our pictures, to be obscured, rather than destroy that which at this eleventh hour of oat• existence has been classed as vermin with all other insect pests. We tremble to think of what might happen if we dealt as leniently with mice, blackbeetles, fleas, or any other verminous creature as we have in the past dealt with the fly l The reason must be that we dislike killing anything with wings or that can fly in the air, for whereas we sorrow over a dead bird, we rejoice when a mouse is brought to us dangling from pussy's jaw. Now, however, we no longer stop to admire the gauzy wings, the nimble legs, or supple neck of the little fly. It is "swat him" or die!

But'what of the spider, the poor, ugly, maligned spider? Hunted from every corner, wiped off every sill, bounded out of every nook where he might make a home, we have waged war OD the fly's natural enemy and our best friend. Never had we been allowed to regard the spider with any feelings save of terror or repugnance. He was a cruel thing, only living to catch the innocent little flies. His webs, to be sure, were objects of admiration in a country hedge when the sun's rays caught the dewy threads, and his pat ience and perseverance were virtues to be emulated, but in or near our houses he must never be permitted. The cobweb in the corner was a shocking sign of the housemaid's delinquency, for which she was usually hauled over the coals. Poor girl! She was, if we bad only known it, providing us with a fly-catcher which, if a trifle unsightly in that particular spot, was infinitely less so than the many devices of man set up in opposition or in its place to-day.

Wo leave a clean and possibly flyless town house for a restful change in a country hotel. We breathe the glorious mountain air, and feast our eyes on the panorama stretched before us. We sit down to dinner, and, in spite of the wasps and flies, enjoy it. Then we lift the glass to our lips and our eyes to—Heaven P Far from it. There from every ornate window cornice bangs a fly cemetery A sticky, juicy, muddy- coloured roll of paper dotted with the black bodies of dead and -dying flies. 0 short-sighted man who could think of sub- stituting that for the cleanly, unoffending spider. We question very much whether our sympathies are not once more on the side of the fly as we see him there struggling, gasping, almost amputating every limb in his endeavours to get free. He may succeed, but only to full dazed and crippled OD our table, and wo quietly "finish " him under the knife. How much more effectively, and albeit unobtrusively, would a couple of little fat spiders have done the work. A neat web up in each corner, half hidden by the creeper and the window- frame, winked at by the cleaners rather than wiped away, and Mister Fly would be scientifically bled to death, and nothing but a clean, empty shell would remain to tell the tale.

There is a lean-to greenhouse in the writer's possession where, shocking to relate, two thick webs of gigantic dimen- sions stretch across a lofty corner, like ships' berths one above another. Dense with dust are they, and black with the ghosts of innumerable little flies caught in their youth and speedily despatched by an always invisible foe. We glance up and smile and look the other way. Not for worlde will we hinder the good work being accomplished, nor shall we deprive Mrs. Spider of her glorious "Liberty hall" until summer suns be gone, and with them the need for Nature's fly- catcher.

We are not aware that the fly has been responsible for a single page in history, whereas every child knows the story of Robert Bruce and the spider. Neither can it be said that the fly has inspired the poet to any great extent, save in the immortal nursery rhyme where the "foolish little fly" is supposed to fall a victim to the cruel spider's flattery, and gets caught at last. Wordsworth, however, devotes no less than six verses to the "poor fool," as he calls him, in a poem which, by a strange coincidence just now, was " Written in Germany on one of the coldest days in the century," and his sentiments are probably responsible for the tender regard with which we, in those far-off days of our ehildbood, were wont to look upon the little fly :- "Yet, God is my witness, thou small helpless Thing i

Thy life I would gladly sustain Till summer come up trout the south, and with crowds

Of thy brethren a march thou should'st sound through the

And back to the forests again I" Had Wordsworth lived to-day no doubt even be would have whacked him out of existence with a wisp of wire! Such is

our way in these most enlightened times, but why expend such energy when the spider is ever ready and willing to do the work for us if we will only allow him ?