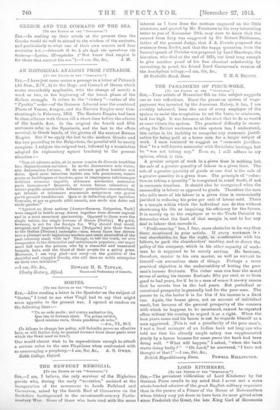 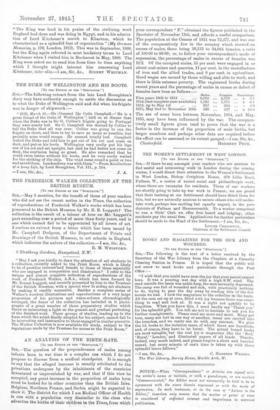 CIS,,—The persistent vilification of Lord Kitchener by the German Press recalls to my mind that I never met a more whole-hearted admirer of the great English military organizer than in the person of a Prince of the House of Hohenzollern whom history may yet deem to have been its most gifted scion since Frederick the Great, the late King Carl of Roumania

" The King was loud in his praise of the civilizing work England had done and was doing in Egypt, and in his admira- tion of Lord Kitchener's march to Khartum, which be characterized as a splendid feat of organization " (My German Memories, p. 170, London, 1912). This was in September, 1899, but the King again referred in most laudatory terms to Lord Kitchener when I visited him in Bucharest in May, 1908. The King even asked me to send him from time to time anything which I thought might interest him concerning Lord Kitchener, inter aria.—I am, Sir, &O., SIDNEY WHITMAN.