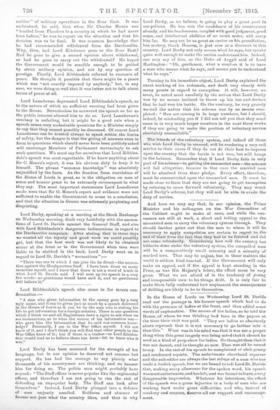 :- "A man who gives information to the enemy goes by a very ugly name, and it can be given just as much by a speech delivered in the House of Lords as it can he by the man who is risking his life to get information for a foreign country. There is one question which I think we and all Englishmen have a right to ask when we see insinuations, as to what the source of his information was— who gave him the information that he said was common know- ledge P Personally, I am in the War Office myself. I did not know of it, and I don't think you will find that other people in the War Office knew of it ; but if there is a traitor—as Lord Ribliles.. dale would lead us to believe there has been—let us know who it was."