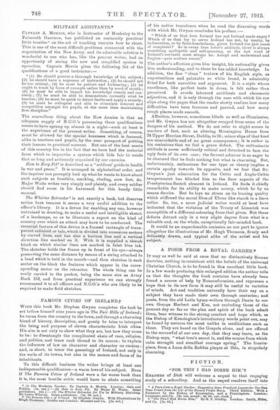 Writs this book Mr. Stephen Gwynn completes the task be net before himself nine years ago in The Fair Hills of Ireland ; he turns from the country to the town, and through acharming blend of history, description, and gossip he tries to interpret the being and purpose of eleven characteristic Irish cities. His aim is not only to show what they are, but how they came to be : to disentangle the complicated skein of race, religion, and politics, and trace each thread to its source : to explain the influence of law on character and character on custom : and, in short, to trace the genealogy of Ireland, not only in the walls of its towns, but also in the names and faces of its inhabitants.

To this difficult business the writer brings at least one indispensable qualification—a warm lore of his subject. Even if The Famous Cities of Ireland were a far worse book than it is, the most hostile critic, would have to abate something • (I) The Musketry Teacher. By Captain A. Morrie. London: Gale and Polden. [Is. net.]— (2) How to Keep Fit. By major Ii. Waite. Same [4d.1-03) The Whirter Retractor for Use in Military Sketching. By Lewis Whiner. Same publishers. [2.. 6d. net] 1 he Famous Oiti s of Ireland. By Stephen Gwynn. With Illustrations by laugh Thomson. Dublin and London: Maunael and Co. [5s, not.]

of his native truculence when he read the disarming words with which Mr. Gwynn concludes his preface :—

" Which of us that love Ireland has not Ireland made angry ? Which of us that try to serve Ireland has not, by vanity, by indiscretion, or by faint-heartedness, given Ireland too just cause of complaint ? As in every true lover's attitude, there is always something apologetic and self-accusing, so the last word of Ireland's servants must always he: Accept and understand and forgive—quia muifum. amavi."

The author's affection gives him. insight, his nationality gives him understanding, and to those he has added knowledge. In addition, the fine "clean" texture of his English style, as unpretentious and palatable as white bread, is admirably fitted for both narrative and argument. It is a style whose excellence, like perfect taste in dress, is felt rather than perceived. It avoids laboured antithesis and chromatic adjectives, and it is only through the ease with which his eye slips along the pages that the reader slowly realizes how many difficulties have been foreseen and parried, and how many rough places made smooth.

Affection, however, sometimes blinds as well as illuminates, and Mr. Gwynn has not altogether escaped from some of the dangers of his method. We do not refer to slight errors in matters of fact, such as altering Morniugton House from 24 Upper Merrion Street, Dublin, to 26; minor slips of that kind are unavoidable and of no great consequence ; it is rather in his omissions that we feel a grave defect. The enthusiastic attitude is never sufficiently critical and detached to face the ugly facts of its own case; the fervent admirer is so eager to be charmed that he finds nothing but what is charming. But, unfortunately, enthusiasm for one type or theory implies a certain apathy towards its opposite, and we fear that Mr. Gwynn's just admiration for the Celtic and Anglo-Celtio temperament has blinded him to the finer aspects of the Presbyterian-Scotch element in Ireland. He finds it chiefly remarkable for its ability to make money, which he by no means decries. But he lays no stress on its bracing quality which stiffened the moral fibre of Ulster like starch in a linen collar. So, too, a. more judicial writer would at least have indicated that the violation of the Treaty of Limerick was susceptible of a different colouring from that given. But these

defects detract only in a very slight degree from what is a valuable and, on the whole, exceptionally fair-minded book.

It would be an unpardonable omission on our part to ignore altogether the illustrations of Mr. Hugh Thomson, firmly and delicately drawn, and typical alike of the artist and his subject.