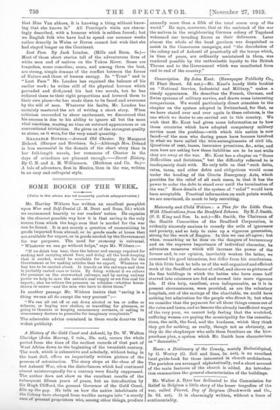 6d. net.)—Mr. Kent's handy little booklet on "National Service, Industrial and Military," makes a timely appearance. Re describes the French, German, and Swiss systems of military service, and draws some interesting comparisons. We would particularly direct attention to the chapter on the system adopted in Switzerland, for that, as we have stated over and over again in these columns, is the one which we desire to see carried out in this country. We wish that Mr. Kent had given some information as to how those countries whioh have adopted compulsory military service meet the problem—with which this nation is now faced—of the men who during peace have become involved in what we have called the wire-entanglements of civil life. Questions of rent, leases, insurance premiums, &a., arise, and men here are asking how these liabilities are to be met while they are away at the war. Mr. Kent has a chapter on " Some Difficulties and Solutions," but the difficulty referred to is inadequately dealt with. He only tells us that " such debts, rates, taxes, and other debts and obligations would come under the heading of the Courts Emergency Acts, which provides for the relief of all such cases, in that it has the power to order the debt to stand over until the termination of the war." More details of the system of "relief " would have been acceptable. Practical information on such points would, we are convinced, do much to help recruiting.