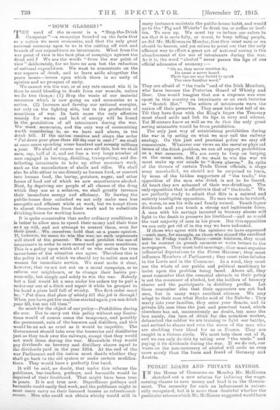 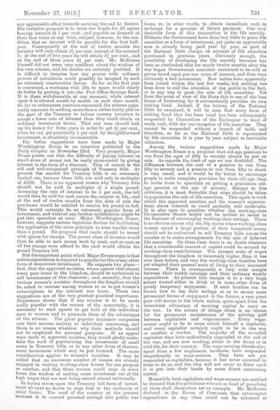 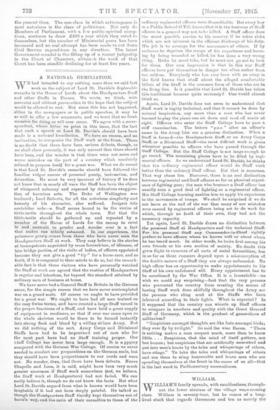 IN the House of Commons on Monday Mr. McKenna sketched out a new scheme for inducing the wage- earning classes to save money and lend it to the Govern- ment. The necessity for such an inducement is univer- sally recognized, but-it is more than doubtful whether the particular scheme which Mr. McKenna suggested would have any appreciable effect towards securing the end he desires. His tentative proposal is to issue war bonds for £1 apiece bearing interest at 5 per cent., and payable on demand at their face value at any time, subject, however, to the con- dition that no interest will be payable for the first half- par, Consequently at the end of twelve months the investor will only obtain 2/ per cent. instead of the nominal 5 ; at the end of two years he will obtain 34 per cent., and at the end of three years 41,i, per cent. Mr. McKenna himself did not seem very confident about the wisdom of his own scheme, and his doubts are certainly justified. It is difficult to imagine bow any person with ordinary powers of calculation could possibly be tempted by such an extremely unattractive device. So far as the first year is concerned, a workman with 20s. to spare would clearly do better by putting it into the Post Office Savings Bauk. It is there withdrawable at any moment, while interest upon it is allowed month by month on each clear month. So far as subsequent years are concerned, the scheme appa- rently amounts to nothing more than a rather tricky plot on the part of the Treasury to induce unwary investors to accept a lower rate of interest than they could obtain on ordinary investment terms. That any man should lock up his money for three years in order to get 4 per cent., v hen he can get practically 5 per cent. by straightforward investment, is absolutely inconceivable.

Far better suggestions have been made by Major Worthington Evans in an interview published in the Daily Graphic on November 23rd. Very properly, Major 'Evans points out that the difficulty of paying interest on small sums of money can be easily surmounted by giving interest in the form of a discount. This of course is the old and well-recognized principle of Treasury bills. At present the market for Treasury bills is an extremely limited one, because these bills are sold only in multiples of £100. There is no apparent reason why Treasury bills should not be sold in multiples of a single pound. Assuming the rate of interest to be 5 per cent., the bill would then be sold for cash across the counter at I9s., and at the end of twelve months from the date of sale the purchaser would be entitled to receive his pound. in full. This would certainly be an extremely popular form of investment, and without any further modification might be put into operation at once. Major Worthington Evans, however, suggests various ingenious devices for facilitating the application of the same principle to even smaller sums than a pound. He proposes that cards should be issued. with spaces for stamps. The poorer class of investor would thus be able to save money week by week, and as soon as all the stamps were affixed to the card. would obtain his pound Treasury bill.

But the important point which Major Evans urges is that active organization is required to popularize this or any other form of democratic investment. He suggests two plans-- first, that the approved societies, whose agents visit almost every poor home in the kingdom, should be authorized to sell investments of this character ; and, secondly, that the various women's societies throughout the kingdom should be asked to canvass among women so as to get women's subscriptions to the national war loans. These two suggestions are of the very greatest practical importance. Experience shows that if any scheme is to be made really popular with the masses of the community, it is necessary to send agents to get bold of the individual man or woman and to persuade them of the advantages of the scheme. The great popular insurance companies owe their success entirely to individual canvassing, and there is no reason whatever why their methods should not be employed for national purposes. If an appeal were made to approved societies, they would gladly under- take the work of popularizing the investment of small sums in Treasury bills, or in any other form of Govern- ment investment which may be put forward. The same consideration applies to women's societies. It may be added that an enormous number of women are already engaged in visiting working-class homes for one purpose or another, and that these women could urge in every home the wisdom of making some investment out of the high wages that are now being earned almost universally.

In laying stress upon the Treasury bill form of invest- ment we have no desire to urge that to the exclusion of other forms. The need of the country at the present moment is to convert personal savings into public war loans, or, in other words, to obtain immediate cash in exchange for a promise of future payment. One very desirable form of this transaction is the life annuity. Hitherto the Government have done very little to press life annuities as a form of investment, yet quite an appreciable sum is already being paid year by year, as part of the National Debt charge, on account of life annuities purchased in previous years. Curiously enough, the possibility of developing the life annuity business has been so overlooked. that for nearly twelve months after the war began Government annuities continued to be sold at prices based upon pre-war rates of interest, and thus were obviously a bad investment. New tables have apparently been issued within the last few weeks, but nothing has been done to call the attention of the public to the fact, or in any way to push the sale of life annuities. Yet from the point of view of the State this is one of the best forms of borrowing, for it automatically provides its own sinking fund. Indeed, if the history of the National Debt be examined, it will be seen that every form of sinking fund that has been tried has been subsequently suspended by Chancellors of the Exchequer in need of ready cash, with the one exception of life annuities. They cannot be suspended without a breach of faith, and therefore, so far as the National Debt is represented by life annuities, it is year by year subject to inevitable reduction.

Among the various suggestions made by Major Worthington Evans is a proposal that old-age pensions to run from the ages of fifty to seventy should bo put on sale. As regards the limit of age we are doubtful. The difference between the cost of a pension to run from fifty to seventy and a pension to run from fifty to death is very small, and it would be far better to encourage people to make complete provision for their old age than to invite them to speculate on getting a gratuitous old- age pension at the age of seventy. Subject to this criticism, it is most desirable that steps should be taken to popularize the sale of life annuities. This again is work which the approved societies and the women's organiza- tions above referred to could perfectly well undertake. It is also open to question whether the working-class Po-operative Store* might not be invited to assist in the business of encouraging working-class savings. There is no obvious reason why the big stores whore working-class women spend, a large portion of their household money should not be authorized to sell Treasury bills across the counter or to make arrangements for the sale of deferred life annuities. On these lines there is no doubt whatever that a considerable amount of capital could be secured. by working-class contributions. The present scale of wages throughout the kingdom is immensely higher than it has ever been before, and very few working-class families have yet adapted their general scale of living to their increased income. There is consequently a very wide margin between their weekly earnings and their ordinary weekly expenditure. At present this margin is to a very large extent wasted either in drink or in some other form of purely temporary enjoyment. If such families can be shown how to use their savings so as to secure more permanent forms of enjoyment in the future, a very great gain will accrue to the whole nation, quite apart from the immediate advantage of securing capital to carry on the war. In the nature of things there is no reason for the permanent maintenance of the existing gulf between capitalists and wage-earners. Every wage- earner ought to be to some extent himself a capitalist, and every capitalist certainly ought to be in one way or another a worker. The majority of the so-called capitalist class have undoubtedly responded to the call of the war, and are now working, either in the Army or in civil life, for their country. The wage-earning classes also, apart from a few unpleasant incidents, have responded magnificently as wa,ge-earners. They have not yet responded as capitalists, because it has never occurred to them to do so, and the idea will not occur to them until it is put into their heads by some direct canvassing agency.

Meanwhile both capitalists and wage-earners are entitled to demand that the politicians who are so fond of preaching at them shall themselves set an example. Mr. McKenna declared in the House of Commons that extravagant expenditure in any class could. not be tolerated at the-present time. The one class in Which extravagance is most notorious is the class of politicians. Not only do Members of Parliament, with a few public-epirited excep- tions, continue to draw £400 a year which they voted to themselves, but the number of Ministerial posts has been increased and no real attempt has been mash) to cut down Civil Service espenditore in any direction. The latest Government ecnindal is the filling up of a vacant judgeship in the Court of Chancery, al thoueh the work of that Court has been steadily declining for at least five years.