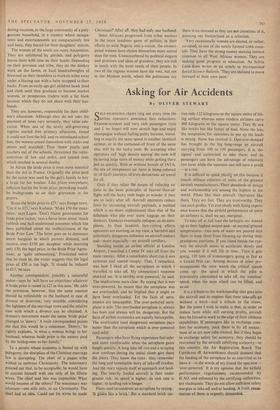 By OLIVER STEWART CELF-RIGHTEOUS cheers ring out every time the a airline operators announce fare reductions.

Expense-account and very rich passengers (you and I, we hope) will now stretch legs and enjoy champagne without feeling guilty because, travel- ling at exactly the same speed in another identical airliner, or in the curtained-off front of the same one, will be the lucky mob. By accepting what operators call 'high density seating' the mob will be saving large sums of money while getting there just as quickly. With or without benefit of IATA, the era of inexpensive ,air fares is being ushered in; of thrift journeys, of truly democratic air travel for all.

Only if they relate the means of reducing air fares to the basic principles of heavier-than-air flight will the lucky mob begin to wonder if they are so lucky after all. Aircraft operators reduce fares by increasing aircraft payloads, a method which is no more sophisticated than that of the fellaheen who pile ever more luggage on their donkeys. Donkeys eventually collapse; so do aero- planes. In their laudable fare-cutting efforts operators are exerting,-in my view, a harmful and pdtentially dangerous influence on aircraft makers and—more especially—on aircraft certifiers.

Standing beside an airline official at London Airport, I watched a Comet IV take off from the main runway. After a remarkably short run it was airborne and soared steeply. That, I remarked, was how I liked all the aeroplanes in which I travelled to take off, My companion's response shocked me. 'It is terribly over-powered,' he said. The implications were clear. By saying that it was over-powered, he meant that the aeroplane was not overloaded; and he implied that it ought to have been overloaded. Yet the facts of aero- nautics are inescapable. The over-powered aero- plane is safe. The overloaded aeroplane is, always has been and always will be, dangerous. But the facts of airline economics are equally inescapable. The overloaded (and dangerous) aeroplane pays better than the aeroplane which is over-powered (and safe).

Passengers who have flying experience feel safer and more comfortable when the aeroplane gains height quickly. A long take-off run and a scraping over rooftops during the initial climb give them the jitters. They know the risks : they remember the long and lamentable story of take-off crashes.

And the story repeats itself at approach and land- ing. The heavily loaded aircraft is then under greater risk; its speed is higher; its sink rate is higher; its landing run is longer.

Pilots used to condemn an aeroplane by saying : 'It glides like a brick.' But a standard brick car- ries only 122 kilograms to the square metre of lift- ing surface whereas some modern airliners carry 400 kilograms to the square metre. They fly not like bricks but like lumps of lead. None the less, the temptation for operators to put up the loads is strong. None has resisted it. Operator-demand has brought in the big long-range jet aircraft carrying from 100 to 150 passengers. It is 'de- signed' and authorised to take them; and its passengers can have the advantage of relatively low fares while the operator can still earn a profit —at a risk.

It is difficult to speak plainly on this because it entails oblique criticism of some of the greatest aircraft manufacturers. Their standards of design and workmanship are among the highest in the world. Pilots like their aircraft. Operators like them. They are fast. They are trustworthy. They can earn profits. Yet everybody with flying experi- ence knows that the airfield performance of some jet airliners is, shall we say, marginal.

To take off at full load the turbojets are wound up to their highest output and—at normal ground temperatures—two tons of water are poured into them to keep them from blowing up during their prodigious exertions. If you stand beside the run- way the aircraft seems to accelerate slowly and ' you wonder if it will lift in time. Then it gets going, 130 tons of ironmongery going as fast as a Grand Prix car. Among dozens of other pre- occupations the crew watch the critical speeds come up: the speed at which the pilot is irrevocably committed to take off, the 'rotation speed, when the nose wheel can be lifted, and so on.

But the point I wish to make is that, in order to reduce fares while still earning profits, aircraft may be forced to work to the edge of their ultimate capabilities. If passengers like to exchange com- fort for economy, pack them in by all means : most of us are now tube-trained. But if they begin to exchange safety for economy, they should be restrained by the aircraft certifying authority—in this country, the Air Registration Board. The Certificate df Airworthiness should demand that the loading of the aeroplane be so restricted as to leave it—in the words of my friend the operator- 'over-powered.' It is my opinion that the airfield performance requirements recommended by ICAO. and enforced by the certifying authorities, are inadequate. They do not allow sufficient safety margins at take-off and at landing. A fresh exam- ination of them is urgently demanded.