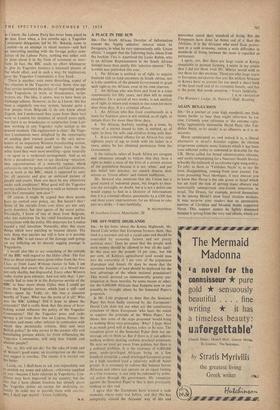 SIR,—In his letter about the Kenya Highlands, Mr. David Cole writes that European farmers think 'that land is a national and not a racial asset and should be controlled by economic factors and not purely political ones.' Does he mean that the people with most money should be allowed to buy all the land? In this case not the present 24 per cent., but 100 per cent. of Kenya's agricultural land would pass into the ownership of 3 per cent. of the population (European and Asian). Or does he mean that the economic benefits of land should be deployed for the best advantage of the whole national population? This would demand an immeasurably greater par- ticipation in these benefits, by some means or other, for the 6,000,000 Africans than happens now or can possibly be brought about by the Sessional Paper's proposals.

Is Mr. Cole prepared to deny that the Sessional Paper has been badly received by the Europeans? David Cole does not say what are the constructive criticisms of those Europeans 'who have the vision to support the principle of the White Paper,' but thinks that some of the steps proposed 'would bring to nothing those very principles.' Why? I hope there is as much good will in Kenya today as he says. The reception given to the Sessional Paper does not en- courage one to think so. But if there is, it can achieve nothing without making realistic practical proposals, He says we must get away from politics, but there is a political problem. It is the existence of 6,000.000 poor, under-privileged Africans living on a low standard alongside a small privileged European group on a high standard (and a relatively well-off Asian group). It is necessary to redress this balance before Africans and others can operate on an equal footing in a free economy; it can only be redressed by politi- cal action through the government. My complaint against the Sessional Paper is that it does practically nothing to this end.

I agree, too, that there are large tracts in Kenya unsuitable to peasant farming. 1 wrote in my article that I did not think even Mr. Mboya would wish to use them for this purpose. There are also large tracts in European occupation that are. Six million Africans in Kenya have at present far too small a share both of the land itself and of its economic benefit, and this is the point that needs attention.—Yours faithfully.