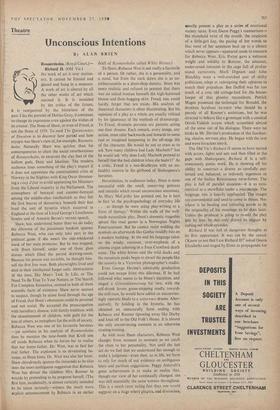 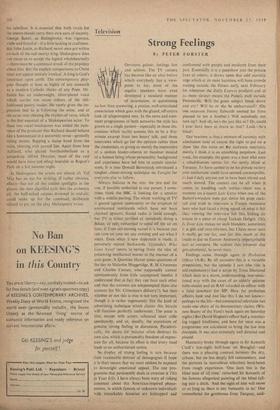 By ALAN BRIEN Rosmersholm. (Royal Court.)— Richard H. (Old Vic.) No work of art is ever station- 1 r ary. It cannot be framed and glazed and hung .in a museum. A work of art is altered by all the other works of art which succeed it. It is moulded by the critics of the future, it is reorganised by the historians of the past. Like the portrait of Dorian Gray, it continues to change its expression even against the wishes of its creator. The Ibsen of Shaw, or even of Freud, is not the Ibsen of 1959. To read The Quintessence of Ibsenism is to discover how partial and how myopic was Shaw's view of, for example, Rosmers- holm. Naturally Shaw was quicker than his contemporaries to chart the social reverberations of Rosmersholm, to excavate the clay feet of the hollow, gods, Duty and Idealism. The modern audience loses something of the play's impact if it does not appreciate the constitutional crisis of Norway in the Eighties with King Oscar threaten- ing a coup d'etat to avoid appointing his Ministers from the Liberal majority in Jhe Parliament. The atmosphere of betrayal and counter-betrayal among the middle-class intellectuals as they felt the first heaves of democracy beneath their feet bred the sort of hysteria which occurred in England at the time of Lloyd George's Limehouse *tirades and of Aneurin Bevan's vermin speech.

Shaw, too, understood better than we do today the dilemma of the passionate bookish spinster Rebecca West, who can only take part in the political if she wears the side-whiskered mask of her male protector. But he was trapped, with Ibsen himself, under one of those glass domes which filled the period drawing-room. Because his prison was invisible, he thought him- self the first free man. Both playwrights lived and died in their intellectual Jaeger suits. Abstractions of the time, like Man's Task In Life, or The Need To Be True To Your Nature, or The Search For Complete Innocence, seemed to both of them scientific facts of existence. Shaw never seemed to suspect, though he alone lived through the age of Freud, that Ibsen's obsessions could be personal and not social. He accepted the preoccupation with hereditary disease, with family tradition, with the abandonment of children, with guilt for the sins of others, as metaphors for the evils of society. Rebecca West was one of his favourite heroines —yet nowhere in his analysis of Rosmersholm, does he mention the time-bomb that Kroll sets off inside Rebecca when he forces her to realise that her foster-father, Dr. West, was in fact her real father. The explosion is so devastating be- cause, so Ibsen hints, Dr. West was also her lover. Shaw chivalrously ignores the innuendo as he also does the more ambiguous suggestion that Rebecca West has driven the childless Mrs. Rosmer to suicide by pretending to be pregnant herself. (The first hint, incidentally, is almost certainly intended to be taken seriously—witness the much more explicit announcement by Rebecca in an earlier draft of Rosmershohn called White Horses.) To Shaw,.Rebecca West is not really a facsimile of a person. Or rather, she is a personality, and a mind, but from the neck down she is as un- embarrassable as a dress-shop dummy. Ibsen was more realistic and refused to pretend that there was no naked woman beneath the high-buttoned blouse and floor-hugging skirt. Freud, too, could hardly forget that sex exists, His analysis of theatrical characters is often illuminating. But his opinions of a play as a whole are usually vitiated by his ignorance of the methods of dramaturgy.

To Freud, dramatis personae are patients acting out their dreams. Each remark, every image, any action, must refer backwards and inwards to some real or imagined happening in the off-stage life of the character. He would be not so crass as to ask 'how many children had Lady Macbeth?' but he would ask `why does Lady Macbeth pretend to herself that she had children when she hadn't?' As a critic, Freud is a neo-Bradleyan with an un- healthy interest in the girlhood of Shakespeare's heroines.

Nevertheless, to audiences today, Ibsen is most successful with the small, unnerving gestures and remarks which reveal unconscious intentions.

As Mary McCarthy has pointed out, he is best in fact `at the psychopathology of everyday life . . . as though he were using play-writing as a form of therapy.' Within the walls of • the well- made naturalistic play, Ibsen's domestic tragedies sprout like mad genies in a Norwegian Nights Entertainment. But he cannot resist welding the symbols on afterwards like Gothic twiddly-bits on a modern building. At the end his language,takes On the windy, resonant, over-emphasis of a cinema organ ushering in a.Joan Crawford death scene. The white horses and the wild .ducks and the mountain peaks begin to dwarf the people like the scenery, in a Victorian photographer's studio. Even George Devine's admirable production could not escape from this dilemma. If he had followed what seems to be Ibsen's intention, and staged a Gotterdeimmerung for two, with the self-drunk lovers goose-stepping madly towards the mill-race, he would have added an unconvinc- ingly operatic finale to a sotto-voce drama. Alter- natively, by holding in the hysteria, he has obtained an unnaturally lame ending with Rebecca and Rosmer tiptoeing away like Darby and Joan off to the Old Folk's Home. it is almost the only unconvincing moment in an otherwise riveting evening.

As with most Ibsen characters, Rebecca West changes from moment to moment as we catch the clues to her personality. Not until the last act do we feel that we understand her enough to make a judgment—even then, as in life, we have to rely for much of our evidence on ambiguous hints and partisan suggestions. Peggy Ashcroft's great achievement is to make us realise that, though our view of her continually changed. she was still essentially the same woman throughout. This is a much rarer acting feat than one would suppose on a stage where players, and dramatists, usually present a play as a series of emotional variety turns. Even Dame Peggy's mannerisms— the rhomboid twist of the mouth, the suspicion of a little-girl lisp, the pacing of her words so that most of her sentences lead up to a climax which never appears—appeared made to measure for Rebecca West. Eric Porter gave a welcome weight and solidity to Rosmer, the amateur, under-sexed innocent in the cage full of profes- sional carnivores. Mark Dignam and John Blatchley were a well-matched pair of shifty politicians, adept at redesigning their opinions to match their prejudices. Bee Duffell was far too much of a cosy old cottage-loaf for the house- keeper of that gloomy mausoleum. Patrick Magee possessed the technique for Brendel, the drunken layabout ex-tutor who should be a parody of all Rosmer's ambitions, but he was directed to behave like a grotesque with a comical Oirish-Yiddish accent which scrambled almost all the sense out of his dialogue. There were no tricks in Mr. Devine's production of this fascinat- ing, elusive, nervous play. He began with the text and wove his actors into it.

The Old Vic's Richard 11 seems to have started with actors, lights and sets and then filled in the gaps with Shakespeare. Richard 11 is a self- consciously poetic work. He is showing off his ability to construct a drama as carefully pat- terned and balanced, as tediously ingenious as one of the Italian Renaissance verse-forms. The play is full of parallel situation—it is as sym- metrical as a snowflake under a microscope. The language, too, is heavily appliqueed. The images are conventional and tend to come in threes. No- where is he beating and torturing words to fit the originality of his meanings as he does later. Unless the producer is going to re-edit the play line by line, he dan only distort its impact by cutting out whole episodes.

Richard 11 was full of dangerous thoughts at its first appearance. It was cut by the censor (`Know ye not that I am Richard II?' asked Queen Elizabeth) and staged by Essex as propaganda for his rebellion. It is essential that both rivals for the crown should carry their own aura of majesty. George Baker, as Bolingbroke, was vigorous, virile and forceful—if a little lacking in craftiness. But John Justin, as Richard, never once got within an inch of the sad martyr king. Shakespeare does not mean us to accept the legend wholeheartedly —there must be a continual streak of the popinjay about him. But the explicit comparisons to Christ must not appear entirely ironical. A king is God's lieutenant upon earth. The contemporary play- goer thought at least as highly of any monarch as a modern Catholic thinks of any Pope. Mr. Justin has an underweight, silver-plated voice which carries too many echoes of the old- fashioned poetry reader. He rarely gives the im- presSion that he is following the sense, and at the same time obeying the rhythm of verse, which is the first essential of a Shakespearian actor. To these two vocal weaknesses was added the iasis- -tence of the producer that Richard should behave like a homosexual in a university revue—genteelly eating sweets, flapping a damp hand from the wrist, tittering with pursed lips. Apart from Joss ACkland, who played Northumberland as a jumped-up Alfred Drayton, most of the cast would have been just about bearable in Regent's Park on a hot. summer night.

in Shakespeare the actors are almost all. Val May has an eye for striking, if rather obvious, effects—but not all the sudden spotlights in the gloom, the slow. dignified exits into the orchestra pit, the half-naked corpses drowned in mid-air, could make- up for the continual, deliberate refusal to put on the play Shakespeare wrote.