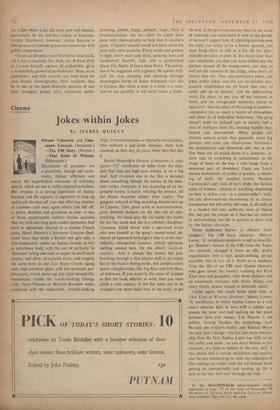 By ISABEL QUIGLY Persons Unknown and Char- mants Garcons. (Academy.) The FBI Story. (Warner.) —That Kind of Woman. (Metropole.) DELUSIONS of grandeur are a peculiarly, though not exclu- sively, Italian affliction and match the hyperbolical character of everyday speech, which no one is really expected to believe. But wryness is a saving ingredient of Italian humour and the capacity it engenders to leap up and brush the dust off your seat after any number of tumbles—and start again where you left off, as perky, deluded, and grandiose as ever—is one of those mysteriously ruthless Italian qualities that we, with our long guilt-ridden memories, find hard to appreciate. Second to a routine French piece, Henri Decoin's Charmants Garcons (bed- room farce that needs a Bardot and gets only a Zizi Jeanmaire), comes an Italian comedy as wry as anticlimax itself, with the sort of perfectly 'in character' acting one used to expect in the French cinema, and alive, un-actorish faces; and roughly the same story as our Too Many Crooks (gang with high-powered plans and low-powered per- formance), which shows up just what remarkably unauthentic crooks the louche-looking George Cole, Terry-Thomas or Bernard Bresslaw make, compared with the respectable, amiable-looking Tota, Vittorio Gassman, or Marcel lo Mastroianni, who without a gap-tooth between them look crooked, as they say, in grain, when they feel like it, Mario Monicelli's Persons Unknown-1 solid ignoti—CU' certificate) all suffer from the delu- sion that they are high-class crooks, in on a big deal. And everyone else in the film is deluded about something, though the nature of the delu- sion varies; everyone, if not dreaming of an im- possible future, is busily refuting the present, till the dream becomes solider than reality. The gangster reduced to bag-snatching dreams he's an Al Capone; TOO, great artist in semi-retirement, gives donnish lectures on the fine art of safe- cracking; the maid says the old ladies she works for are her aunts and she is a colonel's daughter; Gassman, failed boxer with a pea-sized brain who sees himself as the gang's master-mind, de- mands an approach to burglary that is, in his mar- vellously unexpected stammer, strictly (phonetic spelling needed here, for the effect) 'sh-sh-sh- ientifico.' And it sounds like money for jam, breaking through a thin plaster wall in an empty flat to the bank's strong-room, but complications spawn complications, like big fleas and little fleas, ad infinitum. if you want (in the cause of science) to film the bank officials at work then you must pinch a eine camera; if the flat turns out to be occupied you must make love to the maid, to get the key; if she gives you the key then (in the cause of cunning) you must hand it over to the porter, so he won't suspect you; if, climbing key-less over the roof, you break in on a lovers' quarrel, you must hang there as still as a bat till the inter- minable invective is over; if, five hours later than you calculated, you find you have drilled into the kitchen instead of the strong-room, you may as well eat the contents of the fridge, since that's all there's time for. They are cumulative jokes, and jokes within jokes, and the sort of circular pro- gressive misfortunes we all know that may so easily add up to disaster; and the sidetracking tricks life plays, to put you off the business in hand, and the orange-peel moments, literal or figurative. And the effect of the acting is somehow cumulative too, as much a matter of atmosphere and place as of individual behaviour. The gang doesn't seem an isolated unit in society, but a slice of ordinary slum life, looking happily hap- hazard and uncontrived. When people call Italians natural actors they generally mean big gestures and noise and street-corner histrionics, the declamatory and rhetorical side; but in this film these are all scaled down to a domestic, in- door size, to something as unhistrionic as the shape of boots or the way a coat hangs from a downcast pair of shoulders: There are Toto's minute movement's of eyelid or jawline, a clench- ing of teeth, the smallest twitch; Memmo Carotenuto's ugly look of hurt pride; the Sicilian sense of honour—absurd or touching, depending on how it strikes you—in a peanut-seller's Walk; the tiny down-and-out movements of an almost transparent but still perky old man. It all adds up to a modest but very authentic view of Italian life; not just the corner of it that has an interest in safe-cracking, but life in general as dealt with by the Italian character.

From inefficient thieves to efficient thief- cats:hers: The FBI Story (director: Mervyn Leroy; 'A' certificate) purports. to tell us how Ed- gar Hoover's reform of the FBI from the Twen- ties onwards changed it from an idle, grafty organisation into a. vast, quick-striking, jet-age machine; but in fact all it shows us is incidents from the life of an FBI man (James Stewart), who goes about the country catching Ku Klux Klan men and gangsters, with three children and an excessively tiresome wife (Vera Miles), and every family drama turned to domestic cliche.

Cliche again, but much better dealt with, in That Kind of Woman (director: Sidney Lumet; 'A' certificate), in which Sophia Loren as a rich man's mistress falls in love with a soldier and spends the hour and half making up her mind between love and money. Tab Hunter is the soldier, George Sanders the moneybags, Jack Warden the soldier's buddy and Keenan Wynn the rich man's stooge—the last two more memor- able than the first. Sophia Loren has little to do but suffer and smile: as you don't believe in her situation, it's hard to believe in the rest. Still, it has charm and a certain stylishness and pathos: and the last moments go to swell my collection of film endings on trains, with the left-behind lover getting on unexpectedly and turning up like a jack-in-the-box half-way through the ride.