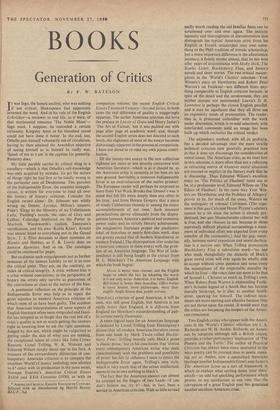 BY F. W. BATESON T was lino, the honest ancient, who was nothing Id not critical; Shakespeare had apparently invented the word. And in his role of the English Urkritiker—a reviewer in real life, as it were, of that sentimental romance 'The Noble Moor'— Iago must, I suppose, be conceded a certain virtuosity. Kingsley Amis in his bloodiest mood could not have done it better. In the end, too, Othello puts himself voluntarily out of circulation, having by then attained the Arnoldian objective of seeing himself as in himself he really was. 'Speak of me as 1 am' is the caption for posterity. Posterity does.

My little parable carries its critical sting in a corollary—which is that Othello's self-knowledge was only acquired by mistake. To get the nature of things right he had first to be totally wrong in the particular case of Desdemona. This paradox of the Indispensable Error, the essential misappli- cation, is written for everyone to read all over the history of literary criticism. Consider the English record alone: Dr. Johnson was wildly wrong on Donne, Lycidas, Milton's sonnets, Pope's 'Elegy to the Memory of an Unfortunate Lady; Fielding's novels, the odes of Gray and Collins; Coleridge blathered on the Porter in Macbeth, Wordsworth's realism, Tennyson's versification, and his own 'Kubla Khan'; Arnold was almost blind to everything not in the Grand Style; T. S. Eliot descends to sheer nonsense on Hamlet and Hobbes, as F. R. Leavis does on Samson Agonistes. And so on. The catalogue could be continued for pages.

But to dismiss such misjudgments just as further instances of the human liability to err is to miss the critical point. They are, on the contrary, an index of critical integrity. A critic without bias is a critic without convictions; in the perspective of history the errors only survive as guarantees of the convictions or clues to the nature of the bias.

A penitential reflection on the principle of the Indispensable Error may help us to repair the gross injustice to modern American criticism of which most of us have been guilty. The accident that American interpretations of some aspects of English literature often seem misguided and fanci- ful has tempted us to forget that the real test of a critic's quality is not so much getting the answers right as knowing how to ask the right questions. Judged by this test, which might be vulgarised as getting under the skin of what you are reading, the exceptional talent of critics like John Crowe Ransom, Lionel Trilling, W. K. Wimsatt and Edmund Wilson simply stares one in the face. A measure of the extraordinary distinction of con- temporary American criticism is to compare the excellent 'World's Classics' anthology now allotted to it* either with its predeceSsor in the same series, Norman Foerster's American Critical Essays XI Xth and X Xth Centuries (1930), or 'with its

Selected with an Introduction by Harold Beaver. (O.U.P., 7s.) companion volume, the recent English Critical Essays Twentieth Century—Second Series. In both cases the real difference of quality is staggeringly apparent. The earlier American selection did have the preface to Leaves of Grass and Henry James's 'The Art of Fiction,' but it was padded out with page after page of academic wool; and, though the second English series does not descend to such levels, the slightness of most of the essays becomes distressingly apparent in the process of comparison. 1 have not dared to re-read my own jejune contri- bution.

Of the twenty-two essays in the new collection eighteen are more or less directly concerned with American literature—which is as it should be, as the American critic is certainly at his best on his own ground. Inevitably, a common Indispensable Error is an overvaluation of the native product. The European reader will perhaps be surprised to learn from Van Wyck Brooks that Dreiser's was 'a mind that felt life more deeply than any other in his time,' and from Horace Gregory that a piece of windy Californian rhetoric is 'among the major accomplishments of our time.' Such innocent parochialism derive ultimately from the dispro- portion between America's political and economic power today and its strictly literary achievement. (In imaginative literature proper the qualitative total, of first-class or nearly first-class work, does not greatly exceed that of modern Scandinavia or modern Ireland.) The disproportion also underlies a recurrent concern in these essays with the prob- lem of an American language. The War of Inde- pendence is still being fought in the extract from H. L. Mencken's The American Language with which the book begins : Movie is better than cinema; and the English begin to admit the fact by adopting the word; it is not only better American. it is better English. Bill-board is better than hoarding. Office-holder is more honest, more picturesque, more thor- oughly Anglo-Saxon than public servant.

Mencken's criterion of good American, it will be seen, was still good English; but America is not really better than England, it is different from England (as Mencken's misunderstanding of pub- lic servant neatly illustrates).

A more logical basis for an American language is deduced by Lionel Trilling from Hemingway's dictum that 'all modern American literature comes from one book by Mark Twain called Huckle- berry Finn.' Trilling bravely calls Huck's prose 'a classic prose,' but in his conclusion that 'almost every contemporary American writer who deals conscientiously with the problems and possibility of prose' has felt its influence 1 seem to detect the Indispensable Error again. Trilling's own style, which is very much that of the urban intellectual, seems to me to owe nothing to Huck's.

The fact that the American classics can almost be counted on the fingers of two hands—if you don't believe me, try it ! —has, in fact, been a service to American criticism. With so little to read really worth reading the old familiar faces can be scrutinised over and over again. The analytic intensity and thoroughness of documentation that distinguish the typical American critic from his English or French counterpart may owe some- thing to the PhD tradition of minute scholarship, but a more important difference is the affectionate intimacy, a family matter almost, that he has won after years of acquaintance with Moby Dick, The Scarlet Letter, Huckleberry Finn, and James's novels and short stories. The two critical master- pieces in the 'World's Classics' selection—Yvor Winters's piece on Hawthorne and Robert Penn Warren's on Faulkner—are different from any- thing comparable in English criticism because, in spite of the detail 'and the involvement, they are neither myopic nor sentimental. Leavis's D. H. Lawrence is perhaps the closest English parallel, and it may be significant that they all. three use an expository mode of presentation. The reader, that is, is presumed unfamiliar with the work under discussion, which is re-told selectively with interlarded comments until an image has been built up which embodies the critical verdict.

The expository method, with all its prolixity, has a decided advantage over the more strictly technical criticism now generally practised here in that it does not discourage the consideration of moral issues. The American critic, as we meet him in this selection, is more often than not a reflecting or refracting mirror of whatever moral situations are enacted or implicit in the literary work that he is discussing. Thus Edmund Wilson's excellent essay on 'The Politics of Flaubert' turns out to be, at a profounder level, Edmund Wilson on 'The Ethics of Flaubert.' In the same way Yvor Win- ters on 'Hawthorne and the Problem of Allegory' proves to be, for much of the essay, Winters on the ambiguity of colonial Calvinism. (The argu- ment is that qua Calvinist Hester Prynne's adultery cannot be a sin since the action is already pre- destined, but qua Massachusetts colonist her will is free, and she chooses to sin, because in those supremely difficult physical surroundings a maxi- mum of individual effort was expected from every member of the community.) And the gap, natur- ally, between moral exposition and moral declara- tion is a narrow one. When Trilling pronounces Huckleberry Finn a subversive work—'no one who reads thoughtfully the dialectic of Huck's great moral crisis will ever again be wholly able to accept without some question and some irony the assumptions of the respectable morality by which he lives'—the voice does not seem to be that of Samuel L. Clemens so much as Trilling's own. When Robert Penn Warren is expounding Faulk- ner's fictional legend of a South that has become morally bankrupt, he is also, as another South- erner, speaking for himself. The indirect state- ments are more moving and effective because they are not thrust upon the reader. It would seem that the critics are becoming the keepers of the Ameri- can conscience.

Two English critics who appear with the Ameri- cans in the 'World's Classics' selection are I. A. Richards and W. H. Auden. Richards, an Ameri- can by adoption although still a British citizen, provides a rather perfunctory 'explication' of 'The Phoenix and the Turtle.' The author of Practical Criticism has always been more interested in the ways poetry can be misread than in poetic mean- ing per se. Auden, now a naturalised American (perhaps another Indispensable Error), uses James's The American Scene as a sort of framework in which to explain what settling down 'over there' entails—an odd but sparkling performance which proves, to my satisfaction at any rate, that the corruption of a great English poet has generated another excellent American critic.