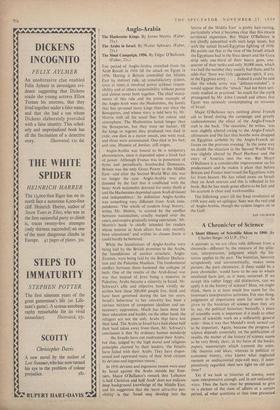 The Arabs in Israel. By Walter Schwarz. (Faber, 21 s.) The Sinai Campaign, 1956. By Edgar O'Ballance. (Faber, 21s.) Tun period of Anglo-Arabia stretched from the Arab Revolt in 1916 fill the attack on Egypt in 1956. During it Britain controlled the Middle East by indirect rule, an unsatisfactory system, since at times it involved power without respon- sibility and at others responsibility without power and almost never both together. The chief instru- ments of this rule and the prime example of the Anglo-Arab were the .Hashemites, the family that has sprouted more kings than any since the Bonapartes, and whose story is told here by Mr. Morris with all his usual flair for colour and atmosphere. The Hashemites lasted longer than the Bonapartes, but they were no luckier. Of the kings or regents they produced two died in exile, one died in a motor smash, one went mad. and three were assassinated. One died in his bed, and one, Hussein of Jordan, still reigns.

Anglo-Arabia was bound to be a temporary phenomenon, since it depended upon a freak fact of power. Although France was in possession of Syria and periodically bombarded Damascus, Britain was the only Great Power in the Middle East—and after the Seccind World War this was no longer the case. Anglo-Arabia was also doomed by the fact that it conflicted with the basic Arab nationalist demand for unity (both it and the Hashemites depended upon Arab division) and independence: by definition Anglo-Arabia was something very different from Arab inde- pendence. 'The whole of modern Iraqi history,' writes Mr. Morris, 'is scarred by the conflict i between nationalism, cruelly warped over the years, and empire gradually losing conviction.' Mr. Morris's book Is chiefly intended for readers whose interest in Arab affairs has only recently been stimulated,' and within its chosen limits it could hardly be bettered.

While the foundations of Anglo-Arabia were being laid by the British promises- to the Arabs, the foundations of another structure, Anglo- Zionism, were being laid by the Balfour Declara- tion and the Palestine Mandate. The fundamental conflict between them hastened the collapse of both. One of the results of the Arab-Israel war was that instead of Jews being a minority in Palestine, Arabs became a minority in Israel. Mr. Schwarz's able and objective book vividly de- scribes how these 200,000 people live, think and have been governed during the last ten years. Israel's behaviour to her minority has been a curious mixture of competent idealism and un- necessary oppression. Much has been done for their education and health; on the other hand, the refugees are not the only Arabs that have lost their land. The Arabs in Israel have itcl about half their land taken away from them. Mr. Schwarz's conclusion is that 'by ordinary human standards . . . the Israelis have not mistreated their Arabs,' but that, judged by the high moral and religious principles claimed by their leaders, 'the Israelis have failed with their Arabs. They have dispos- sessed and oppressed many of their Arab citizens by devious and ingenious means.'

In 1956 devious and ingenious means were used by Israel against the Arabs outside her fron- tiers. Major O'Ballance's remark that 'Lebanon is half Christian and half Arab' doeS not indicate deep background knowledge of the Middle East, and his suggestion that the 'most attractive pos- sibility' is that 'Israel may •develop into the Sparta of the Middle East' is pretty hair-raising, particularly when it becomes clear that this means territorial expansion. But Major O'Ballance is not chiefly concerned with such large issues, but with thp actual Israeli-Egyptian fighting of 1956. He points out that at the time of the Israeli 'attack the Egyptians had in the Sinai desert and the Gaza strip only one-third of their heavy guns, one- quarter of their tanks and only 30,000 men, which was half the number they usually had there, and he adds that 'there was little aggressive spirit, if any, in the Egyptian army. . . . Indeed it could be said that the whole army was "defence-minded"; it would appear that the "attack" had not been seri- ously studied or practised.' So much for the myth propagated by Mr. John Connell and others that Egypt was seriously contemplating an invasion of Israel.

Major O'Ballance says nothing about French aid to Israel during the campaign and greatly underestimates the effect of the Anglo-French stab in the back. 'The situation,' he writes, 'was now slightly altered owing to the Anglo-French ultimatum and the fact that bombs were dropped on Egyptian airfields by the Anglo-French air forces on the previous evening.' In the same way no doubt the situation in the Second World War was slightly altered by Pearl Harbour and the entry of America into the war. But Major O'Ballance is a considerable improvement on his predecessors and he -makes it plain that before Britain and France intervened the Egyptians were far from beaten. He has relied more on Israeli than on Arab sources and this is reflected in his book. But he has made great efforts to be fair and his account is clear and workmanlike.

The following years till the Iraqi revolution of 1958 were only an epilogue. Suez was the real end of Anglo-Arabia, though the system lingers on in the Gulf.