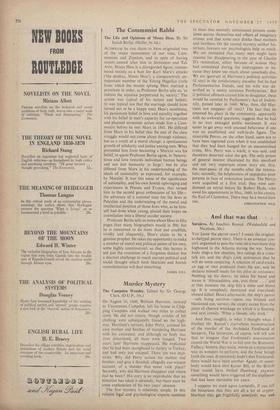 The Campden Wonder. Edited by Sir George Clark. (O.U.P., 18s.) ON August 16, 1660, William Harrison, steward to Viscountess Campden, left his house in Chip- ping Campden and walked two miles to collect rents. He did not return, though articles of his clothing were subsequently found on the high- way. Harrison's servant, John Perry, accused his own mother and brother of murdering Harrison with his assistance; and although no body was ever discovered, all three were hanged. Two years later Harrison reappeared. He explained that he had been shanghaied to slavery in Turkey, and had only just escaped. There are two mys- teries. Why did Perry accuse his mother and brother, and give a detailed, allegedly eye-witness account, of a murder that never took place? Secondly, why did Harrison disappear and where had he been? His story is so improbable that no historian has taken it seriously; but there must be sonic explanation of his two years' absence.

The first mystery is relatively simple. In this voluine legal and psychological experts combine to show that mentally unbalanced persons some- times accuse themselves and others of imaginary crimes; and that some men dislike their mothers and brothers. On the second mystery neither his- torians, lawyers nor psychologists help us much. We are reminded that many men might have reasons for disappearing in the year of Charles 11's restoration, either because of actions they had committed during the interregnum or be- cause they knew too much about somebody else. We are ignorant of Harrison's political activities (if any) in the revolutionary decades; but he had Parliamentarian friends, and his wife was de- scribed as 'a snotty covetous Presbyterian.' But if political offences caused him to disappear, these would be covered by Parliament's Act of Indem- nity, passed later in 1660. Why, then, did Har- rison not reappear till 1662? The fact that he resumed his place in the community, apparently with no awkward questions, suggests that he had in no way outraged public sentiment. It was easier to get away with unusual behaviour if one was an established and well-to-do figure. The miserable Perrys, on the other hand, seem not to have been regretted even when it was established that they had been hanged for an uncommitted crime. Mrs. Perry was a witch, it was said, and therefore deserved what she got. The only points of general interest illustrated by 'this unsolved and not very important crime story are, first, the near-panic of the months after the restora- tion; secondly, the helplessness of unpopular poor persons in face of restoration justice. The Perrys were acquitted at a first trial; they were con- demned on retrial before Sir Robert Hyde, who owed his appointment in May, 1660, to his cousin, the Earl of Clarendon. There may be a moral here