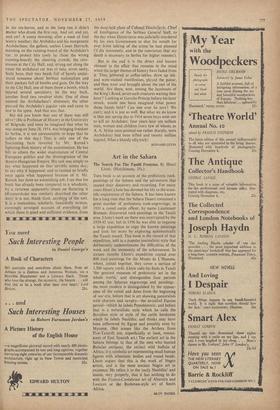 Art in the Sahara

The Search For The Tassili Frescoes. By Henri Lhote. (Hutchinson, 35s.) Tics book is an account of the prehistoric rock- paintings of the Sahara and the adventures that caused their discovery and recording. For many years Henri Lhote has devoted his life to the scien- tific exploration of the Sahara. It has been known for a long time that the Sahara Desert contained a great number of prehistoric rock-engravings; in 1933 a camel corps officer, by name Lieutenant Brenans, discovered rock-paintings in the Tassili area. Lhote's work on these was interrupted by the 1939-45 war, but in 1956 he was able to organise a large expedition to copy the known paintings and look for more by exploring systematically the Tassili massif. This book is the record of that expedition, told in a popular journalistic style that deliberately underestimates the difficulties of the work and the immensity of the achievement. In sixteen months Lhote's expedition copied over 800 rock-paintings for the Musee de L'Homme, where, joined together, they cover a surface of 1,500 square yards. Lhote calls his finds in Tassili `the greatest museum of prehistoric art in the whole world,' and distinguishes four periods among the Saharan engravings and paintings : the most modern is distinguished by the appear- ance of the camel and dates from the beginning of our era; before that is art showing pastoralists with chariots and cavalry—the so-called Equine period—which he labels Protohistoric; and before that is a naturalistic style which he calls the Bovidian style or style of the cattle herdsmen which he labels Neolithic and thinks may have been influenced by Egypt and possibly even by Mycenae. (But scenes like the Archers from Ti-n-Tazarift are, superficially at least, remini- scent of East Spanish art.) The earliest art in the Sahara belongs to that of the men who hunted Bubalus antiquus, the extinct wild buffalo of Africa; it is symbolic art representing small human figures with schematic bodies and round heads. Lhote argues that this is the work of Negro artists, and is the most ancient Negro art in existence. He refers it to the 'early Neolithic' and insists, very properly, that it has nothing to do with the Franco-Cantabrian art of Altamira and Lascaux or the Bushman-style art of South Africa.