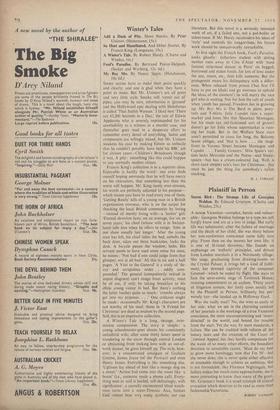 A MINOR Victorian—complex, heroic and vulner- able : Georgina Weldon belongs to a type we still hardly know and are at a loss to judge. Her early life was submissive; after the failure of marriage and the death of her child, she was thirty before her non-conformist conscience came fully into play. From then on she invents her own life; it is one of ill-fated devotion. She founds an orphanage on 'aesthetic' principles, and driven from London marshals it in a Normandy village. She sings, graduating from drawing-rooms to the Crystal Palace; it brings her a kind of fulfil- ment, her devoted captivity of the composer Gounod—which he ended by flight. She stays to face the serio-comic siege of. Tavistock House, resisting commitment to an asylum. Thirty years of litigation remain, her forty cases mostly led by the Plaintiff in Person, brilliantly but per- versely too—she landed up in Holloway Gaol.

Was she really mad? No, she wins us easily to her side; what we see in the charming candour of her journals is the workings of a true Victorian conscience, the most uncompromising and 'inner- directed' in the world, and bound for trouble from the start. Yet she was, by most standards, a failure. She can be credited 'with reform of the lunacy laws and the creation of the Court of :riminal Appeal, but they hardly compensate for the waste of so many other efforts, the boundless devotion to unsuitable causes. 'Must do my best to grow more humbuggy now that I'm 50'—but she never does; she is never quite either effective or amenable enough to achieve an ambition. She is not formidable, like Florence Nightingale, but failure makes her much more approachable; she is more interesting to know than many of the great. Mr. Grierson's book is a small triumph of critical evocation which deserves to be read as more than fashionable Victoriana.