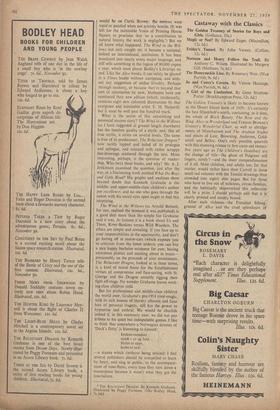 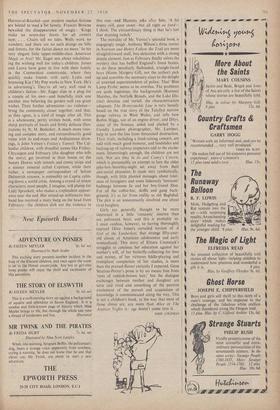 Castaway with the Classics

The Golden Treasury of Stories for Boys and Girls. (Gollancz, 15s.)

The Golden Treasury is likely to become known as the Desert Island book of 1959: it's certainly the best fifteenbob's-worth, containing, as it does, the whole of Black Beauty, The Rose and the Ring, Alice in Wonderland and Frances Browne's Granny's Wonderful Chair, as well as abridge- ments of Munchausen and The Arabian Nights and pieces of Lear, Browning, Andersen, Gold- smith and Belloc. One's only possible quarrels with this stunning reissue (it first came out twenty- five years ago as The Children's Omnibus) are the change of title-the ghost of Palgrave still lingers, surely?-and the sheer compendiousness of it all. Most children, and adults too, for that matter, would rather have their Carroll in those small red volumes with the Tenniel drawings than crowded into eighty slim pages. But for those who have to live out of suitcases, circus families, and the habitually shipwrecked this collection will be a prize. I should perhaps add that it is clearly printed and stoutly bound.

After such richness-the Freudian fishing- ground of Alice and the cruel splendours of Haroun-al-Raschid—our modern market fictions are bound to read a bit tamely. Frances Browne bewailed the disappearance of magic: 'Kings make no seven-day feasts for all corners now. . . . Chairs tell no tales. Wells work no wonders; and there are no such doings on hills and forests, for the fairies dance no more.' In his very elegant little upper-middle-class American Magic or Not? Mr. Eager sets about rehabilitat- ing the wishing well for today's children. James and Laura have gone to live with their family in the Connecticut countryside, where they quickly make friends with surly Lydia and bouncing Kip ('My Pop works in New York. He's in advertising'). They're all very well read in children's fiction—Mr. Eager slips in a plug for a couple of his own—and hopefUlly trick one another into believing the garden well can grant wishes. Their further adventures—no violence— bring the community closer together; and that, as they agree, is a kind of magic after all. This is a wholesome, pertly written book, with some sharp portraits of locals and firmly delicate illus- trations by N. M. Bodecker. A much more rous- ing and complex story, and extraordinarily good value with its end-maps and Ardizzonean draw- ings, is John Verney's Friday's Tunnel. The Cal- lendar children, with dreadful names like Friday, Chrysogon and February (the daughter who tells the story), get involved in their house on the Sussex Downs with tunnels and comic strips and a sinister mineral called Caprium, while their father, a newspaper correspondent of Sefton Delmerish renown, is ostensibly on Capria calm- ing down a world crisis. Among a crowd of minor characters, most people, 1 imagine, will pluinp for Lady Sprockett, who makes a resplendent appear- ance near the end. Her mixed-up millionaire hus- band has received a nasty bang on the head from February—the children dish out the violence in this one—and Mummy asks after him. 'A bit dopey still, poor sweet—but all right au fond- 1 think. The extraordinary thing is that he's lost that shaming twitch.

The morality of Mr. Verney's splendid book is engagingly tough. Anthony Wilson's three stories in Norman and Henry Follow the Trail are more straightforward stuff, boy-detection with a strong puzzle element. Just as February finally solves the mystery that has baffled England's finest brains, so do these peculiarly flatheaded, triangle-faced boys (blame Margery Gill, not the author) pick up and assemble the necessary clues to the delight of assorted superintendents of police. That 'Blue Lamp Probe' seems to be overdue. The problems are quite ingenious, the backgrounds (Romney Marshes, the Norfolk Broads, and the Lake Dis- trict) desolate and varied, the characterisation adequate. The Honeysuckle Line is very loosely based on the true story of the Talyllyn narrow gauge railway in West Wales, and tells how Robin Miggs, son of an engine driver, and Dilys, sister of the fireman, aided and abetted by a friendly London photographer, Mr. Lambert, help to save the line from threatened destruction. Their trials, including a fund-raising concert, are told with much good humour, and landslides and locking-up of railway inspectors add to the excite- ment. Interestingly enough, the children are not rich. Nor are they in Jo and Coney's Cavern, which is presumably an attempt to lure the older juke-box-Saturday-night set away from their anti-social pleasures. It reads very syntheticalfy, though, with little planted messages about toler- ance of foreigners and some hideously 'innocent' badinage between Jo and her boy-friend Don. For all the coffee-bar, skiffie and gang back- ground, it's as far from reality as old Baghdad. The plot is an unnecessarily involved one about rival burglars.

Girls are generally thought to be more interested in a little 'romantic' interest than are pubescent boys; and this is probably so. I must confess, however, to having thoroughly enjoyed Olive Jones's curtailed version of A Girl of the Lintberlost, that strange fifty-year old classic of American adolescence and early womanhood. This story of Elnora Comstock's struggles to continue her education against her mother's will, of her butterfly-collecting for love and money, of her virtuoso fiddle-playing and trumphant completion of her studies, is more than the pressed-flower curiosity I expected. Gene Stratton-Porter's prose is by no means free from 'riots of reddish-brown hair,' but the dialogue exchanges between mother and daughter are terse and vivid and something of the positive excitement of the pursuit and acquisition of knowledge is communicated along the way. This is not a children's book, in the way that most of those above are, any more than Alice or The Arabian Nights is: age doetn't come into it.