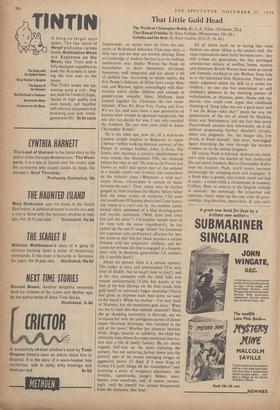 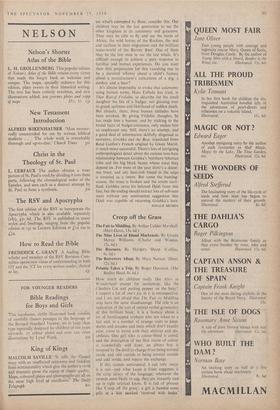 SOMEWHERE, no matter how far from the nur- series of Brideshead Sebastian Flyte may stray, a little boy and his bear are forever playing. Even at Cambridge, if Andrew Sinclair is to be credited, intellectuals may display Winnie the Pooh on bookshelves to show themselves all-round, humorous, well integrated and not above a bit of childish fun. According to recent report, the first People's Editions, of Milne have swept Mos- cow and Warsaw, lightly camouflaged with illus- trations which clothe children and animals in people's-type overalls. Here, Methuen have lumped together for Christmas the two verse- volumes, When We Were Very Young and Now We are Six, and once more a new generation of parents must wrestle in agonised reappraisal. No one else can decide for you, I can only marshal the evidence. Do you wish your child to know Christopher Robin?

He is the elder son, now six, of a well-to-do London couple resident in Belgravia or upper Chelsea—within walking distance, anyway, of the Palace. A younger brother, John, is three. The family also maintain a country establishment in what sounds like Hampshire ('Oh, the charcoal burner has tales to tell! He lives in the' Forest and knows us well') and spend part of the summer at a seaside resort—not Frinton, but somewhere on the Atlantic coast ('Whenever a wild nor'- wester blows, Christopher is certain of Sand- between-the-toes'). Their status may be further gauged by their fondness for Harley Street rather than the lower orders of medicine ('All sorts and conditions Of famous physicians Came hurry- ing round at a run') and by the resident nanny named Alice, possessed of a blue dressing-gown and royalist sentiments ('Well, God look after him just the same!'). Christopher spends most of his time with the nurse (significantly, he has picked up the non-U usage 'dinner' for luncheon) but expresses only perfunctory affection for her; she seems to feel that her place imposes a certain distance with her employers' children, and dis- cusses her private life (she is engaged to a Guards- man) only in decorous generalities ('A soldier's life is terrible hard').

About his parents there is a certain mystery. The father is busy and preoccupied ('I'm very fond of Daddy, but he hasn't time to play'), and in his rare moments with the child falls into remote sentimentality ('Little boy kneels at the foot of his bed, Droops on the little hands little gold head') or nervously bogus chumship (Nurse had given us sixpence each And down we went to the beach'). While his mother—'I'm very fond of Mummy, but she sometimes goes away.' What are we to read into that childish reticence? Does she go shopping innocently at Harrods, are we to equate her with the ambiguous parent of James James Morrison Morrison, who vanished at the end of the town? Whether her absences betoken drink, drugs, insanity or infidelity, the• child has obviously been driven by some emotional depriva- tion into a life of lonely fantasy. He sits about vaguely half-way up the stairs (refusing the nursery, but not venturing farther down into the parents' part of the house) indulging images of aggressive power ('I think if I were King of Greece I'd push things off the mantelpiece') and inventing a series of imaginary playmates: the invisible, significantly hungry Binker, mice, beetles, even raindrops, and, of course, increas- ingly, until he himself has almost disappeared from the fantasies, that bear.

All of which leads up to saying that what . bothers me about Milne is the animal stuff. His class implications seem fairly harmless now : they still irritate my generation, but that privileged antediluvian infancy of muffins, hoops, nannies and miniature British Warms must seem as unreal and formally mythical to our Welfare State kids as to the fascinated little Muscovites. There's not much argument about his skill as a writer for children : no one else has understood so well children's pleasure in the dawning powers of verbalisation, in choruses, puns, rhyme and rig- marole. One could even argue that childhood chanting of 'King John was not a good man' and '1 am Sir Brian—take that!' paves the way for appreciation of the use of sound by Hopkins, Joyce and Shakespeare; and the fact that many Punch-drunk parents dote whimsically on it all, without progressing farther, shouldn't, strictly, affect our judgment. No, the danger lies, I'm afraid, in Pooh himself: that stout, bow-legged figure bestriding the view through the nursery window on to the animal kingdom.

Of course, Pooh is beloved. Animals are child- ren's only equals, the sharers of their instinctual life and secret freedom. But as Christopher Robin loses his freedom, Pooh, you'll notice, becomes increasingly his whipping-slave and scapegoat. It is Pooh who is greedy, dim-witted, timid and bad at sums: a failed .child, a chimpanzee in trousers, Caliban. Here in embryo is the English attitude to animals: the patronage, the projection and rejection, which make up the cosy cults of pony- worship, dog-devotion, pussy-love. If you can't

see what's corrupted by them, consider this. Our children may be the last generation -to see the other kingdOm in its autonomy and greatness. They may be able to fly and see the, herds of Africa, the wild horses of the Rockies, the seal and caribou in their migrations and the brilliant water-world of the Barrier Reef. One of them may be the last man to see the last whale. It's difficult enough to achieve a pure response to familiar and human experiences. Do you want their first preparation for this vanishing one to be a parental whimsy about a child's fantasy about a manufacturer's caricatures of a pig, a donkey and a bear?

It's almost impossible to evoke that autonomy using human terms. Hans Fallada has tried, in That Rascal Fridolin, to describe for his small daughter the life of a badger, not glossing over its greed, surliness and likelihood of sudden death. But already, there, three human attitudes have been invoked.' By giving Fridolin thoughts, he haS made him a human; and by sticking to the brutal facts of badger-existence, only makes him an unpleasant one. Still, there's an attempt, and a good deal of information skilfully disguised as narrative. GriShka and the Bear, translated from Rene Guillot's French original, by Gwen Marsh, is much more successful. There's lots of intriguing anthropological detail about the curious love-hate relationship between Grishka's Northern Siberian tribe and the big black beasts whose meat they depend on. For most of the year there's a decor- ous truce, and any bear-cub found in the taiga is cosseted as a totem. But come the hunting- season, the truce is broken and the totem sacri- ficed. Grishka saves his beloved Djidi from this late, but the ending should extract lots of sub-teen tears without any sentimental suggestion that Djidi was capable of returning Grishka's love.