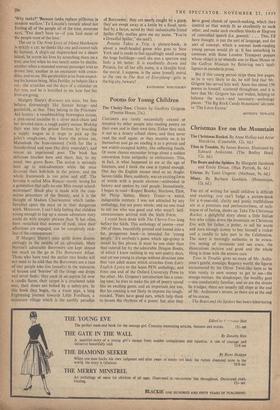 CHILDREN are rarely successfully coaxed or tempted by other people into reading poetry on their own and in their own time. Either they stick it out as a dreary school chore, and then never read the stuff again; or they stumble on it by themselves and go on reading it as a private and not widely-accepted hobby, like collecting fossils. Or some chance encounter brings about a sudden conversion from antipathy to enthusiasm. This, in fact, is what happened to me at the age of fourteen, and I think the case is typical enough. One day the English master read us an Anglo- Saxon riddle. Here, suddenly, was an exciting form of words with a puzzle element—embedded in history and spoken by real people. Immediately, I began to read—Rupert Brooke, Marlowe, Eliot, Sir Philip Sidney, Henry Treece—a weird, indigestible mixture. I was not attracted by any anthology, but ate poets whole; and no one tried to tell me who was good and who wasn't. Self- consciousness arrived with the Sixth Form.

I could have done with The Cherry-Tree long before the Sixth. This anthology of poems—over 500 of them, beautifully printed and bound into a fat, prosperous book—is intended for 'young people.' It's anybody's guess which age-group is meant by this phrase. It must be one older than that catered for by the admirable Dragon Books, of which I knew nothing in my anti-poetry days, and yet too young to plunge without direction into that vast adult ocean which stretches from Early English Lyrics to the latest PEN anthology, and from one end of the Oxford University Press to the other. Mr. Grigson's introduction has a coax- ing tone; he tries to make the job of poetry sound like an exciting game, and an important one too. But his coaxing is not likely to impress the tough- minded. 'Poets have good ears, which help them to invent the rhythms of a poem; but also they

have good chords of speech-making, which they control so that words fit so excellently to each other, and make such excellent blocks or filagrees of controlled speech (i.e. poems).' . . . This, I'd have thought, is just the sort of language, and the sort of concept, which a normal book-reading young person would jib at. It has something in common with those London Transport posters whose object is to wheedle one to Ham House or the Geffrye Museum by flattering one's intel- ligence in mandarin prose.

But if this young person skips these few pages, as he is very likely to do, he will find that Mr. Grigson has served him well. Anon has about 150 poems to himself, scattered throughout, and it is here that Mr. Grigson has cast widest, helping to balance the stock—and necessary—anthology pieces : 'The Big Rock Candy Mountains' sits next to 'The Lotos Eaters.'