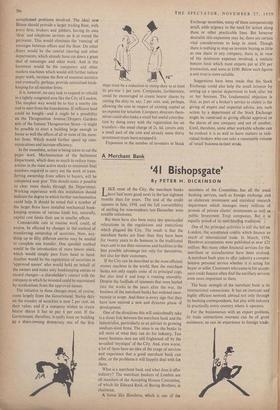 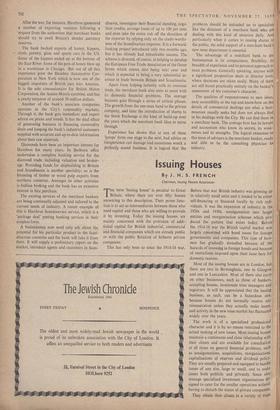 By PETER H. DICKINSON LIKE most of the City, the merchant banks have had more good news in the last eighteen months than for years. The end of the credit squeeze in July, 1958, and the full convertibility of sterling for non-residents last December were notable milestones.

But there have also been many less spectacular relaxations in the regulations and restrictions which plagued the City. The result is that the merchant banks are freer than they have been for twenty years to do business in the traditional ways and to use their resources and facilities to the best possible advantage not only for themselves, but also for their customers.

If the City can be described as the most efficient money machine in the world, then the merchant banks not only supply some of its principal cogs, but also tend it and keep it running smoothly. Despite the fusillade of spanners that were hurled into the works in the years after the war, the business of the merchant banks has widened enor- mously in scope. And there is every sign that they have 'now entered a new and dynamic phase of development.

One of the directions this will undoubtedly take is a closer link between the merchant bank and the industrialist, particularly as an adviser to growing medium-sized firms. The onus is on the banks to tell more of what they can do for industry. Too many business men are still frightened off by the so-called 'mystique' of the City. And, even worse, a lot of them have no idea of the range of services and experience that a good merchant bank can offer, or the problems it will happily deal with for them.

What is a merchant bank and what does it offer industry? The merchant bankers of London are all members of the Accepting Houses Committee, of which Sir Edward Reid, of Baring Brothers, is chairman.

A house like Hambros, which is one of the members of the Committee, has all, the usual banking services, such as foreign exchange and an 'elaborate investment and statistical research department which manages many millions of pounds of private clients' investments as well as public Investment Trust companies. But it is equally proud of its mercbantIng traditions.

One of the principal activities is still the bill on London, the acceptance credits which finance so much of international trade. In March, 1959, Hambros acceptances were published at over £21 million. But many other financial services for the merchant or manufacturer have been evolved. A merchant bank aims to offer industry a compre- hensive personal service. whether it is acting for buyer or seller. Customers who come in for accept- ance credit finance often find the ancillary services even more important to them.

The basic strength of the merchant bank is its international connections. It has an intricate and highly efficient network abroad not only through its banking correspondents, but also with industry in practically every country where it operates.

For the businessman with an export problem, its trade connections overseas can be of great assistance; so can its experience in foreign trade. After the war, for instance, Hambros sponsored a number of exporting ventures following a request from the authorities that merchant banks should try to swell Britain's slender currency reserves.

The bank backed exports of honey, kippers, cloth, pottery, glass and sports cars to the US. Some of the kippers ended up at the bottom of the East River. Some of the pots of honey blew up in a warehouse in Chicago. But out of all this experience grew the Hambro Automotive Cor- poration in New York which is now one of the biggest importers of British cars into America. It is the sole concessionaire for British Motor Corporation, the Austin-Morris combine, and has a yearly turnover of around 70 million dollars.

Another of the bank's associate companies operates in the City's commodity markets. Through it, the bank gets immediate and expert advice on prices and trends. It has the dual effect of generating business in financing commodity deals and keeping the bank's industrial customers supplied with accurate and up-to-date information about their raw materials.

Diamonds have been an important interest for Hambros for many years. Its Holborn office undertakes a complete banking service for the diamond trade, including valuation and broker- age. Providing funds for shipbuilding in Britain and Scandinavia is another speciality; so is the financing of timber or wood pulp exports from northern countries. Amongst its other activities is bullion broking and the bank has an extensive interest in hire purchase.

The existing services of the merchant bankers are being continually adjusted and tailored to the current needs of industry. A recent example of- this is Hambros Scandinavian service, which is a 'package deal' putting banking services in their simplest form.

A busineisman now need only ask about the potential for his particular product in the Scan- dinavian countries and the bank will take it from there. It will supply a preliminary report on the market, introduce agents and customers in Scan- can- dinavia, investigate their financial standing, nego- tiate credits, arrange loans of up to 100 per cent. and even take the entire risk off the shoulders of the exporter by relying only on the credit-worthi- ness of the Scandinavian importer. It is a forward- looking project introduced only two months ago, but it has alriady had remarkable success. The scheme is directed, of course, at helping to develop the European Free Trade Association of the Outer Seven which comes into being next year and which is expected to bring a very substantial in- crease in trade between Britain and Scandinavia.

Apart from helping industry with its overseas trade, the merchant bank also aims to assist with its domestic financial problems. The average business goes through a series of critical phases. The growth from the one-man band to the private company, and later the introduction of shares to the Stock Exchange is the kind of build-up over the years which the merchant bank likes to nurse through.

Experience has shown that at any of these 'jumps' from one stage to the next, bad advice or inexperience can damage and sometimes wreck a perfectly sound business. It is logical that the problems should be unloaded on to specialists like the directors of a merchant bank who are dealing with this kind of situation daily. And particularly when it comes to issuing shares to the public, the solid support of a merchant bank's new issue department is essential.

The advantage of a merchant bank to the businessman is its compactness, flexibility, its breadth of experience and its personal approach to most problems. Generally speaking, anyone with a significant proposition deals at director level, where decisions are taken easily. Many of them are still based practically entirely on the banker's assessment of his customer's character.

The qualities of responsiveness to new ideas, easy accessibility at the top and know-how on the details of commercial dealings are what a busi- nessman usually seeks but does not always find in his dealings with the City. He can find them in a merchant bank. The average firm has its lawyer and accountant who know its secrets, its weak- nesses and its strengths. The logical extension to this team of advisers is the merchant banker, ready and able to be the consulting physician to industry.