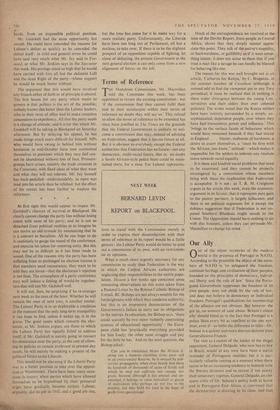 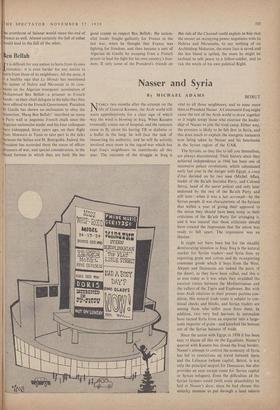 ONE of the minor mysteries of the modern world is the presence of Portugal in NATO. According to the preamble the object of the mem- bers of NATO is to safeguard the freedom, common heritage and civilisation of their peoples, founded' on the principles of democracy, individ- ual liberty and the rule of law.' Since the Portu- guese ,Governtnent suppresses the freedom of its • own people, does not abide by the rule of law. and does not believe in democracy or individual freedom, Portugal's qualifications for membership of the alliance are not obvious. But however she got in, no amount of cant about ,Britain's oldest ally' should blind us to the fact that Portugal is a police State every bit as repellent as the one next door, even if—as befits the difference in titles—Dr. Salazar is a quieter and more discreet dictator than Generalissimo Franco.

The visit to London of the leader of the illegal opposition, General Delgado, who now has to live in Brazil, would at any time have been a useful reminder of Portuguese realities, but it is par- ticularly valuable coming at a moment when there seems to be an increasing tendency to hobnob with the Iberian dictators and to excuse if not justify their unsavoury regimes. General Delgado, an elo- quent critic of Dr. Salazar's policy both at home and in Portuguese East Africa. is convinced that the dictatorship is drawing to its close, and that

the overthrow of Salazar would mean the end of Franco as well. Almost certainly the 'fall of either Would lead to the fall of the other.