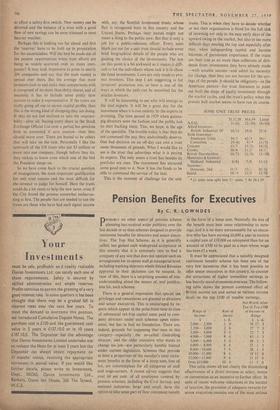 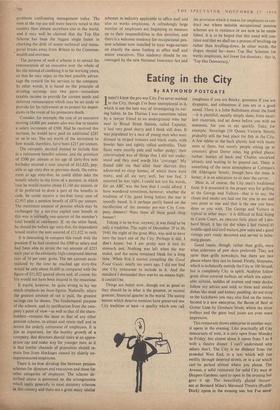 PROBABLY no other aspect of pension scheme planning has received wider publicity over the last decade or so than schemes designed to provide retirement benefits for directors and senior execu- tives. The Top Hat Scheme, at it is generally called, has gained such widespread acceptance in this country that it is extremely rare to find a company of any size that does not operate such an arrangement for its senior staff at managerial level, including working directors where Inland Revenue approval to their inclusion can be secured. In view of this, there is, a surprising amount of mis- understanding about the nature of, and justifica- tion for, such schemes.

There is a general impression that special tax privileges and concessions are granted to directors and senior executives. This is encouraged by re- ports which appear in the press from time to time of substantial tax-free capital sums paid to com- pany directors under such schemes upon retire- ment, but has in fact no foundation. There are, indeed, grounds for supposing that men in this category—especially the so-called • Controlling director, and the older executive who Wants to change his job—are particularly harshly treated under current legislation. Schemes that provide at least a proportion of the member's total retire- ment benefits in the form of a lump sum, free of tax, are commonplace for all categories of staff and wage-earners. A recent survey suggests that over 60 per cent, of all employees covered by pension schemes, including the Civil Service, and national industries, large" and small, have the option to take some part of their retirement benefit in the form of a lump sum. Naturally the size of the benefit must bear some relationship to earn- ings, and it is no more unreasonable for an execu- tive who has been earning £6,000 a year to receive a capital sum of £10,000 on retirement than for an amount of £500 to be paid to a man whose wage has been f.5 a week.

It must be appreciated that a suitably designed retirement benefits scheme has been one of the very few incentives that it has been possible to offer senior executives in this country, to counter the attractions of higher immediate earnings in less heavily-taxed economies-overseas. The follow- ing table shows the present combined effect of British income tax and surtax at various income levels on the top £100 of taxable earnings.

This table shows all too clearly the diminishing effectiveness of a direct increase in salary, bonus or commission as an incentive to further effort. In spite of recent welcome reductions in the burden of taxation, the provision of adequate rewards for senior executives remains one of the most serious problems confronting management today. The men at the top are still more heavily taxed in this country than almost anywhere else in the world, and it may well be claimed that the Top Hat Scheme has been the biggest single factor in checking the drift of senior technical and mana- gerial brains away from Britain to the Common- - wealth and overseas.

The purpose of such a scheme is to spread the remuneration of an executive over the whole of his life instead of confining it to his working years, so that he may enjoy to the best possible advan- tage the reward for his services to the company. In other words, it is based on the principle of dividing earnings into two parts—immediate taxable income to provide for current needs and deferred remuneration which may be set aside to provide for his retirement or to protect his depen- dants in the event of his premature death.

Consider, for example, the case of an executive earning £4,000 per annum who was due to receive a salary increment of £500. Had he received this increase, he would have paid an additional £285 or so in tax. The net worth of the increment to him would, therefore, have been £215 per annum.

The company decided instead to include him in a retirement benefits scheme, and the premium of £500 per annum at his age of forty-five next birthday secured a sum assured of £11,822, pay- able at age sixty-five or previous death. On retire- ment at age sixty-five, he could either take the benefit wholly in the form of a pension, in which case he would receive about £1,160 per annum, or if he preferred to draw a part of the benefits in cash, he could receive a tax-free lump sum of £2,955 plus a pension benefit of £870 per annum. The maximum amount of pension which may be exchanged for a tax-free capital sum benefit in this way is normally one-quarter of the member's total benefit at retirement If, on the other hand, he should die before age sixty-five, his dependants would receive the sum assured of £11,822 in cash.

It is interesting to compare this result with the position if he had received the £500 as salary and had been able to invest the net amount of £215 each year at the extremely high compound interest rate of 10 per cent. gross. The net amount accu- mulated by the time he reached age sixty-five would be only about £6,600 as compared with the figure of £11,822 quoted above and, of course, his life would not have been insured in the meantime.

It would, however, be quite wrong to lay too much emphasis on these figures. Naturally, where the greatest amount of tax is paid, the greatest savings can be shown. The fundamental purpose of the scheme, and its justification from the com- pany's point of view—as well as that of the share- holders—remains the same as that of any other pension scheme, to attract and retain staff and to secure the orderly retirement of employees. It is just as important, for the healthy growth of a company, that directors should retire at an appro- priate age and make way for younger men, as it is that lowlier channels of promotion should re- main free from blockages caused by elderly un- superannuated employees.

There is no true dividing line between pension schemes for directors and executives and those for other categories of employee. The scheme de- scribed above is patterned on the arrangements which apply generally to most statutory schemes in this country and there are a great many similar schemes in industry applicable to office staff and also to works employees. A refreshingly large number of employers are beginning to measure up to their responsibilities in this direction, and there is a welcome tendency for occupational pen- sion schemes now installed to treat wage-earners on exactly the same footing as office staff and senior executives. This tendency should be en- couraged by the new National Insurance Act and the provision which it makes for employers to con- tract out where suitable occupational pension schemes are in existence or are now to be estab- lished. It is to be hoped that this trend will con- tinue and that we shall see a process of levelling-up rather than levelling-down. In other words, the slogan should be—more Top Hat Schemes for works employees, not fewer for directors: that is, `Top Hat Democracy.'