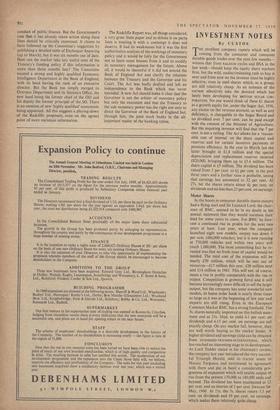 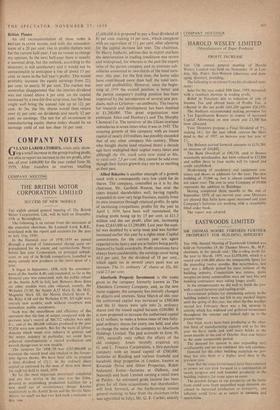 By CUSTOS THE excellent company reports which will be coming from the consumer and consumer durable goods trades over the next few months— witness that from RALEIGH cycles and BSA in the last week—should keep the equity share markets firm, but the wild, undiscriminating rush to buy is over and from now on the investor must be highly selective, even in steel shares which, as a group, are still relatively cheap. As an instance of the current selectivity take the demand which has lately been developing for BRITISH SUGAR COR- PORATION. No one would think of these £1 shares as a growth equity for, under the Sugar Act, 1956, any excess on the revenue account, as well as any deficiency, is chargeable to the Sugar Board and no dividend over 7 per cent. can be paid except with the consent of the Minister of Agriculture. But the inquiring investor will find that the 7 per cent. is not a ceiling. The Act allows for a 'reason- able rate of interest' on the share capital and reserves and for certain incentive payments to promote efficiency. In the year to March last the latter brought in £1.8 million and the special depreciation and replacement reserves received £820,000, bringing them up to £5.6 million. The share capital is £5 million. The dividend has been raised from 5 per cent. to 6+ per cent. in the past three years and. a further raise is probable, seeing that earnings last amounted to 32 per cent. At 27s. 6d. the shares return about 41 per cent. on dividends and no less than 23 per cent. on earnings.

Motor Shares In the boom in consumer durable shares motors had a flying start and Sir Leonard Lord, the chair- man of BMC, seemed to be in no doubt in his annual statement that they would maintain their lead for some years to come. For BMC he fore- cast a continued rise in profits for the next two years at least. Last year, when the company launched eight new models, output was down 4 per cent. (486,000 vehicles), but it is now running at 750,000 vehicles and within two years will reach 1,000,000. The most astonishing fact he re- vealed was that do fresh issue of capital would be needed. The total cost of the expansion will be nearly £50 million, which will be met out of resources—£15 million this year, £20 million next and £14 million in 1961. This will not, of course, mean a rise in profits comparable with the rise in output. Competition is growing fierce and it will become increasingly more difficult to sell the larger output, but the company has some wonderful new models, its home order book is nearly three times as large as it was at the beginning of last year and exports are still rising. Even in the European Common Market BMC has a strong foothold. The 5s. shares naturally improved on this bullish state- ment and at 21s. 101d. to yield 4.1 per cent. on dividends and 6.15 per cent. on earnings are not exactly cheap. On any market fall, however, they are well worth buying as the market leader. A higher dividend and earnings yield can be obtained from STANDARD-TRIUMPH-INTERNATIONAL, which has reached an interesting stage in its development. As Lord Tedder stated in his chairman's review, the company last year introduced the very success- ful Triumph Herald, sold its tractor assets to Massey Ferguson and terminated its agreement with them and put in hand a considerable pro- gramme of expansion which will enable output to rise from the present 150,000 to 180,000 units and beyond. The dividend has been maintained at 12 per cent. and an interim of 5 per cent. forecast for May, 1960. At I ls. the 5s. shares return 5.3 per cent. on dividends and 19 per cent. on earnings, which makes them relatively quite cheap.

An old recommendation of these notes is BRITISH PLASTER BOARD, and with the announce- ment of a 20 per cent. rise in profits (before tax) for the current half-year, I see no reason to change my opinion. In the next half-year there is usually a seasonal drop, but the outlook, according to the directors, is still satisfactory and it would not be unreasonable to anticipate a rise of about 15 per cent. or more in. the full year's profits. This would probably increase the equity earnings from 221 per cent. to nearly 30 per cent. The market was somewhat disappointed that the interim dividend was not raised above 4 per cent. on the capital increased by a two-for-five scrip issue, but the final might well bring the annual rate up to 121 per cent. At 26s. the 10s. shares would then return over 41- per cent. on dividends and nearly 12 per cent. on earnings. The test for all investment in manufacturing equity shares today should be an earnings yield of not less than 10 per cent.