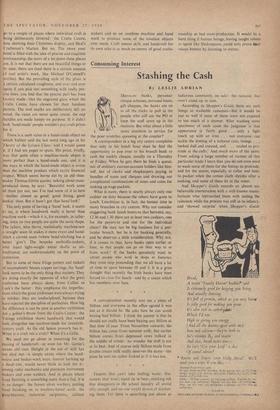 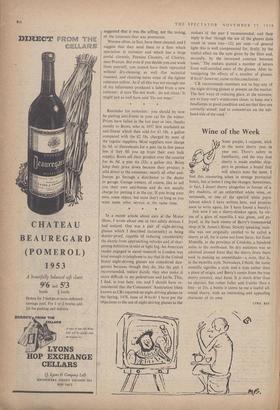 gift cheques, the banks are on to all the tricks to pull in the people who still use the PO or A correspondent in a big city centre complains that only in his lunch hour does he find the opportunity to pop over to his branch bank to cash the weekly cheque, usually on a Thursday or Friday. When he gets there he finds a queue, not of ordinary current-account holders like him- self, but of clerks and shopkeepers paying in bundles of notes and cheques and drawing out complicated combinations of notes and coins for making up wage packets.

What is more, there is nearly always only one cashier on duty because the others have gone to lunch. Lunchtime is, in fact, the busiest time in many branches in city centres. Why not consider staggering bank lunch hours so that between, say, 12.30 and 1.30 there are at least two cashiers, one for the payers-in and one for the individual client? He may not be big business for a par- ticular branch, but he is for banking generally, and he deserves a little consideration. Why not, if it comes to that, have banks open earlier or later, so that people can go on their way to or from work? If the banks genuinely want to attract people who work in shops or factories, they must stop pretending that we all have a lot of time to spare between 10 and 3. It is a grim thought that recently the Irish banks have been forced to close for lunch--and by a union which has members over here.

A correspondent recently sent me a piece of Stilton, and everyone in the office agreed it was not as it should be. He asks how he can avoid buying bad Stilton : I think the answer is that he should not really have been buying any Stilton at that time of year. From November onwards, the Stilton has come from summer milk; but earlier Stilton comes from depressed cows milked in the middle of winter : no wonder the stuff is not at its best. And of course only Stilton made from double cream milk really deserves the name--the piece he sent me rather looked as if it was not.

Teapots that can't take boiling water: Re- screens that won't stand up to heat; marking ink that disappears in the school laundry all sound silly enough, and no one would dream of market- ing them. Yet there is something just about as ludicrous commonly on sale: the raincoat that won't stand up to rain. • According to Shopper's Guide there we such things as washable raincoats--4ut it would be just as well if most of them were not exposed to too much of a shower. After washing some specimens of such coats the judgment is that appearance is 'fairly good . . . only a light. touch up with an iron . . . not everyone can tackle the ironing of a tailored coat, linings . . looked dull and creased, and . . . tended to pro- trude at the cuffs.' And much more of the same. From asking a large number of victims of this particular trade I learn that you do not even need to wash some of them for the linings to protrude, and for the seams, especially at collar and hem, to pucker when the cotton cloth shrinks after a soaking, and some of them let in the water.

And Shopper's Guide records an almost un- believable conversation with a well-known manu- facturer who reproached them with testing the raincoats while the process was still in its infancy, and 'showed surprise' when .Shopper's Guide suggested that it was the selling, not the testing, of the raincoats that was premature.

Women often, in fact, have them cleaned, and I suggest that they send them to a firm which specialises in rainwear and which has a large postal clientele, Pennine Cleaners, of Chorley, near Preston. But even if you decide you can wash them yourself, you cannot have them reproofed without dry-cleaning as well (for technical reasons), and cleaning turns some of the lighter raincoats yellow. As if all this was not enough one of my informants produced a label from a new raincoat: it says 'Do not wash : do not clean.' It might just as well have said 'Do not wear.'

Reminder for motorists: you should by now be putting anti-freeze in your car for the winter. Prices have fallen in the last year or two, thanks mainly to Boots, who in 1957 first marketed an anti-freeze which then sold for £1 18s. a gallon compared with the £2 I 8s. charged by most of the regular suppliers. Most suppliers now charge 6s. 6d. or thereabouts for a pint tin (a few pence less if they fill you up from their own bulk supply). Boots sell their product over the counter for 4s. 9d. a pint tin (32s. a gallon tin). Boots keep their price down because their product is sold direct to the consumer; nearly all other anti- freezes go through a distributor to the dealer or garage. Garage owners, of course, like to sell you their own anti-freeze and do not usually charge for putting it in the car. If you bring your own, some object; but most don't so long as you want some other service at the same time.

In a recent article about cars at the Motor Show, I wrote about one or two safety devices I had noticed. One was a pair of night-driving glasses which I described (accurately) as being shatter-proof, capable of reducing considerably the dazzle from approaching vehicles and, of shar- pening definition in mist or light fog. An American reader engaged in naval research in London was kind enough to telephone to say that in the United States night-driving glasses are considered dan- gerous because, though they do, like the pair I recommended, reduce dazzle, they also make it more difficult to see pedestrians and kerbs. This, I find, is true here, too, and I should have re- membered that the Consumers' Association (then known as CR) reported on night-driving glasses in the Spring, 1958, issue of Which? I have put the objections to the use of night-driving glasses to The makers of the pair I recommended, and their reply is that 'though the use of the glasses does result in some loss-12+ per cent.—of general light this is well compensated for, firstly, by the restful effect on the eyes given by the filter and, secondly, by the increased contrast between tones.' The makers quoted a number of letters from well-satisfied users of the glasses. After in- vestigating the effects of a number of glasses, Which?, however, came to this conclusion : 'CR recommends members not to buy any of the night-driving glasses at present on the market. The best ways of reducing glare, at the moment, are to keep one's windscreen clean; to keep one's headlamps in good condition and see that they are correctly aimed; and to concentrate on the left- hand side of the road.'