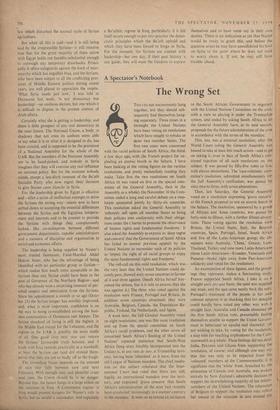 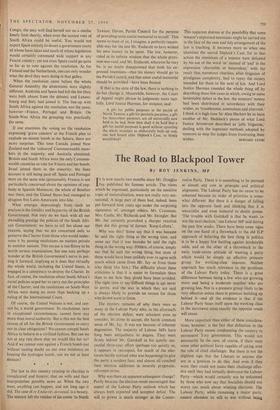 THIEVES not uncommonly hang together, lest they should sub- sequently find themselves hang- ing separately. Three times in a fortnight the United Nations have been voting on resolutions which- have sought to rebuke or deter two member States. The first two votes were concerned with the racial policies of South Africa; the third, a few days ago, with the French project for ex- ploding an atomic bomb in the Sahara. I have been looking at the voting figures on the various resolutions, and pretty melancholy reading they make. Take first the two resolutions on South Africa (it was voted on first in the special com- mittee of the General Assembly, then in the Assembly as a whole). On November 10 the Com- mittee ended a long and careful debate on a reso- lution sponsored jointly by thirty-six countries. This resolution asked the General Assembly to 'solemnly call upon all member States to bring their policies into conformity with their obliga- tions under the Charter to promote the observance of human rights and fundamental freedoms.' It also asked the Assembly to express its 'deep regret and concern' that the Government of South Africa has failed to answer previous appeals by the United Nations to reconsider such of its policies as 'impair the right of all racial groups to enjoy the same fundamental rights and freedoms.'

The roll-call on this mild resolution, which was the very least that the United Nations could de- cently pass, showed sixiy7seven countries in favour of it and three against. (South Africa herself boy- cotted the debate, but it is safe to assume that she was against it.) The three who voted against the resolution were France, Portugal and ,Britain. In addition seven countries abstained; they were Australia, Belgium, Canada, the Dominican Re- public, Finland, the Netherlands, and Spain.

A week later, the full General Assembly voted on eight resolutions; one was this same resolution sent up from the special committee on South Africa's racial problems, and the other seven all concerned South Africa's flouting of the United Nations' repeated insistence that South-West Africa (long • since forcibly incorporated into the Union) is, at any rate de lure, a Trusteeship terri- tory, having been 'inherited,' as it were, from the old League of Nations mandate. The chief resolu- tion on this subject reiterated that the Inter- national Court had ruled that there was still, legally, an international mandate over the terri- tory, and expressed 'grave concern' that South Africa's administration of the area had recently been conducted 'increasingly in a manner contrary to the mandate.' It went on to extend an invitation

to the South African Government to negotiate with the United Nations Committee on the area,

with a view to placing it under the Trusteeship system, and ended by asking South Africa to let the General Assembly have, at its next session, proposals for the future administration of the area in accordance with the terms of the mandate.

This, too, was a minimal resolution; after the World Court ruling the General Assembly was bound to take at least this much action—and to go on taking it. even in face of South Africa's con- tinued rejection of all such resolutions on the subject. It was passed by fifty-five votes to live, with eleven abstentions. The 'race-relations' com- mittee's resolution, submitted simultaneously for the full Assembly's ratification, was passed by sixty-two to three, with seven abstentions.

Then, last Saturday, the General Assembly voted on a resolution expressing 'grave concern'

at the French proposal to test an atomic bomb in the Sahara. The resolution, sponsored by a group of African and Asian countries, was passed by forty-nine to fifteen, with a further fifteen absten- tions. Those voting against the resolution were Britain, the United States, Italy, the Benelux countries, Spain, Portugal, Israel, South Africa and five of the Latin-American group; the ab- stainers were Australia, 'China,' Greece, Laos, Thailand, Turkey and nine more Latin-Americans (three Latin-Americans—Ecuador, Venezuela and Panama—broke right away from Pan-American solidarity and voted for the resolution).

An examination of these figures, and the group- ings they represent, makes a fascinating study.

France supported South Africa, I take it, on a

straight quid pro quo basis; the quid was supplied one week, and the quo came neatly back the next.

Portugal's treatment of the people in her own colonial outposts is so shocking that her delegate could hardly have voted any other way with a straight face. Australia and Canada abstained on the first South Africa vote, presumably feeling theitiselves unable to support the Union Govern-

ment in behaviour so squalid and shameful. >et

not wishing to take, by voting for the resolution, a step with far-reaching implications for the Com- monwealth as a whole. These feelings did not deter India, Pakistan and Ghana from supporting the resolution, of course; and although one may say that this was only to be expected from the 'coloured' members of the Commonwealth. it Is significant that the 'white' front, breached by the abStention of Canada and Australia, was broken entirely by New Zealand's admirable decision to support the overwhelming majority of her fellow- meinbers of the United Nations. The reluctance of Belgium to support the resolution may reflect her unease at the situation in and around the Congo; she may well find herself out on a similar lonely limb shortly, when even the tainted vote of South Africa could be useful. You would not expect Spain entirely to desert a government many of whose basic ideas and much of whose legislation would certainly command wide support in any Fascist country; yet not even Spain could go quite so far as to vote against the resolution. As for Finland and the Netherlands, one can only wonder what the devil they were doing in that galley.

When the resolution came before the whole General Assembly the abstentions were slightly different. Australia and Spain had left the list (they were both absent from the debate), and Luxem- bourg and Italy had joined it. The line-up with South Africa against the resolution was the same, however—France, Portugal and Britain. On South-West Africa the grouping was practically the same.

If one examines the voting on the resolution expressing 'grave concern' at the French plan to explode an atomic bomb in the Sahara, there are more surprises. This time Canada joined New Zealand and the 'coloured' Commonwealth mem- bers in the majority, and Australia abstained. Britain and South Africa were the only Common- wealth countries to vote for France and her bomb. Israel joined them in the minority; the Suez account is still being paid off. Spain and Portugal were on the same side (presumably Franco is not particularly concerned about the opinions of any- body in Spanish Morocco); the whole of Benelux was there, and the United States had managed to dragoon five Latin-Americans into 'hie.

What emerges depressingly from such an analysis is the timidity and hypocrisy of the British Government. Not only do we back with all our dwindling prestige the policies of the South Afri- can Government; we have to tell lies about our reasons, saying that we are concerned only to preserve the Charter from those who would under- mine it by passing resolutions on matters private to member nations. This excuse is too flimsy to be worth serious examination; but one may perhaps wonder at the British Government's nerve in put- ting it forward, implying as it does that virtually the whole world, including the United States, is engaged in a conspiracy to destroy the Charter. In fact, of course, the resolution about South Africa's racial policies urged her to carry out the principles of the Charter, and the resolutions on Sduth-West Africa were doing no more than backing up a ruling of the International Court.

Of course, the United Nations is not, and can- not be, a world government. Its resolutions, save in exceptional circumstances, cannot have any more than moral authority. But is this not the best reason of all for the British Government to carry out its clear obligations? We cannot compel South Africa to behave in a civilised fashion. But can we not at any rate show that we would like her to? And if we cannot vote against a French bomb-test without casting doubt on our own insistence on keeping the hydrogen bomb, can we not at least abstain?

• • * The law in this country relating to charities is complicated and bizarre; that on wills and their interpretation possibly more so. When the two meet, anything can happen, and not long ago it did. The case of re Endacott, deceased, is a beauty. The testator left the residue of his estate 'to North Tawton, Devon, Parish Council for the purpose of providing some useful memorial to myself.' This seems to most of us, I imagine, a perfectly reason- able way for the late Mr. Endacott to have wished his own money to be spent. The law, however, ruled in its infinite wisdom that the whole provi- sion was void, and Mr. Endacott, wherever he may be, is no doubt disappointed that both his ex- pressed intentions—that his money should go to the Parish Council, and that some useful memorial should be provided—have been flouted.

If that is the state of the law, there is nothing to do but change it. •Meanwhile, however, the Court of Appeal might phrase its judgments more tact- fully. Lord Justice Harman, for instance, said : A gift for public purposes in the parish of North Tawton, a gift for patriotic purposes. a gift for benevolent purposes, are all universally now held to be bad. How then shall it be held that a gift for useful purposes is good without upsetting the whole structure so elaborately built up and, one had hoped after Diplock's Case, so firmly established? This apparent distress at the possibility that some testator's expressed intentions might be carried out in the face of the neat and tidy arrangement of the law is touching. It becomes more so when one examines the sacred Diplock's Case, for in that action the intentions of a testator were defeated by his use of the word 'or' instead of 'and' in the expression 'charitable or benevolent,' with the result that numerous charities, after litigation of prodigious complexity, had to repay the money intended for them to the next of kin. And Lord Justice Harman rounded the whole thing off by describing those few cases in which, owing to some lamentable defect in the law, the testators' money had been distributed in accordance with their wishes, as 'troublesome, anomalous and aberrant.' I think it is high time Sir Alan Herbert let us have another of Mr. Haddock's pieces of what Lord Justice Arrowroot described as 'jolly litigation,' dealing with the ingenious methods adopted by testators to stop the judges from frustrating their