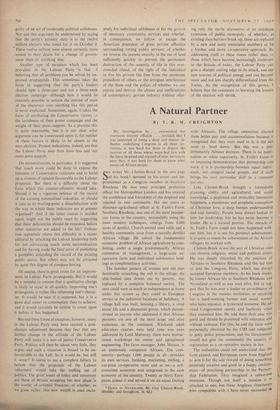 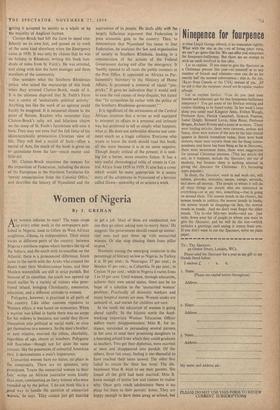 By T. R. M. CREIGHTON My interrogation by . . . overworked but courteous security officials . . . revealed that I was suspected of being a deep and sinister in- fluence underlying Congress in all three/ ter- ritories; it was hard for them to discern the motives of all those whose ways had lain with the more despised and rejected of men. So remote were they, it was hard for them to know what moves all"African people.

So writes Mr. Clutton-Brock in the one page d his book* devoted to his arrest and im- prisonment as a Congress member in. South:sit Rhodesia. He was once principal probation officer for Metropolitan London and has enjoyed the confidence and friendship of the despised and rejected in two continents. His ten years as diocesan agricultural officer at St. Faith's Farm, Southern Rhodesia, saw one of the most prosper- ous farms in the country, successfully using the most modern techniques, emerge from 8,000 acres of derelict, Church-owned sand veldt and a healthy community arise from a socially derelict African village. He solved the fundamental economic problem of African agriculture by com- bining, under a single predominantly African committee of management, a large-scale co- operative farm and individual subsistence hold- ings as complementary activities.

The familiar pattern of women and old men desultorily scratching the soil in the village, the able-bodied men driven out by poverty, was replaced by a complete balanced society. The men could earn as much in independence at home under this system as they could in European service in the industrial locations of Salisbury. A village hall was built, housing a library, a vivid social life and a discussion group, which demon- strated to anyone who addressed it that African peasants are one of the most acute and alive audiences in the continent. Weekend adult education courses were held (one was even addressed by Lord Malvern); there were instruc- tional workshops for motor and agricultural engineering. The farm manager, John Mutasa, is an immensely competent African. The com- munity—Perhaps 1,000 people in all--7-provides its own services, banking, marketing, milling, a cut-price co-operative store and so on—a self- contained economic unit integrated in the cash economy of the country. Twenty or thirty Euro- peans joined it and served it on an equal footing DAWN IN NYASALAND. By Guy Clutton-Brock. (Hodder-and Stoughton, 3s. '6d.)

with Africans. The village committee allotted them better pay and accommodation because it

recognised that they were used to it; it did not want to 'level down.' But this was a pre- dominantly African decision. There is no pater- nalism or white superiority.- St. Faith's Farm is an imposing demonstration that partnership can work if it is partnership between equal indivi- duals, not unequal racial groups, and if each brings his own particular skill to a common purpose

Guy Clutton-Brock brought a formidable planning ability and agricultural and social knowledge, a profound and invincibly humorous happiness, a passionate and prophetic conception of Christian love, a deep human understanding and real humility. People have always looked to him for leadership, but he has never become a leader. He is a natural partner. The miracle of St. Faith's Farm could not have happened with- out him, but it is not his personal achievement. It is quite as much the achievement of the African villagers he worked with.

Clutton-Brock is not the sort of Christian who can divorce religious, social and political ethics. He was deeply disturbed by the position of Africans in Southern Rhodesia and this led him to join the Congress Party, which has always accepted European members. As his book shows, he knows African life in Southern Rhodesia and Nyasaland as well as any man alive, but to sug- gest that he was ever a leader or co-ordinator of Congress in the various territories, or anything but a hard-working farmer and social worker who hates injustice, is hysterical nonsense. He ad- vised Congressmen openly and fearlessly when they consulted him. He told them their case was good and should be presented with tolerance and without violence. For this, he and the farm were perpetually observed by the CID and subjected to petty police persecution, and the Government would not give the community the security of registration as a co-operative society in law.

The authorities could not understand that the farm existed, and Europeans came from England to join it for the sole reward of doing something positively creative and good in a happy environ- ment--of practising partnership in the Partner- ship Federation. They imagined a subversive intention. Though not itself a mission it Is attached to one;•-but those Anglican churchmen who sympathise with it have never succeeded to getting it accepted by society as a whole or by the majority of Anglican laymen.

CluttQn-Brock had left the farm to stand con- fidently on its own feet, and passed on to work of the same kind elsewhere when the Emergency came in 1959. It was only by chance that he was on holiday in Rhodesia, writing this book hun- dreds of miles from St. Faith's. He was arrested, and along with him the farm manager and three members of the community.

One wonders what the Southern Rhodesian police, who seized the manuscript of this book when they arrested Clutton-Brock, made of it. It is the ultimate disproof that St. Faith's Farm was a centre of 'undesirable political activity.' Anything less like the work of an agitator could hardly be imagined. It is measured almost to the point of flatness. Readers who remember Guy Clutton-Brock's salty wit and hilarious charm on the stoep of St. Faith's farmhouse will miss it here. They may not even find the full force of his idiosyncratically provocative Christian view of life. They will find a recital of facts—often a recital of Acts, for much of the book is given up to quotations from the law—much matter and little art.

Mr. Clutton-Brock examines the reasons for the imposition of Federation, including the desire of the Europeans in the Northern Territories for 'speedy emancipation from the Colonial Office,' and describes the history of Nyasaland and the aspirations of its people. He deals ably with the largely fallacious argument that Federation is pure economic gain to the country. Then, to demonstrate that Nyasaland has cause to fear Federation, he analyses the law and organisation of society in Southern Rhodesia, leading to a consideration of the actions of the Federal Government during and after the emergency. It 'hastily opened to all races the public counters in the Post Office. It appointed an African as Par- liamenta'ry Secretary to the Ministry of Home Affairs. It promised a removal of racial "pin- pricks." It gave no indication that it would seek to ease the real causes of deep disquiet, but stated that "its sympathies lie rather with the policy of the Southern Rhodesian government."' It is significant of the seriousness of the Central African situation that a writer so well equipped to interpret its affairs in a personal and intimate way has preferred to tell us simply what happens, what is. He does not embroider disaster nor com- ment much on a tragic collision. Everyone who wants to know the truth should read this book, all the more because it is in no sense negative. Though deeply critical of the present, it is seek- ing for a better, more creative future. It has a very useful chronological table of events in Cen- tral Africa from 1859 to 1959. It also has a cover which would be more appropriate to a seamy story of the adventures in Nyasaland of a heroine called Dawn—unworthy of so serious a work.