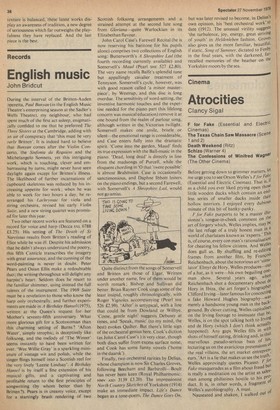 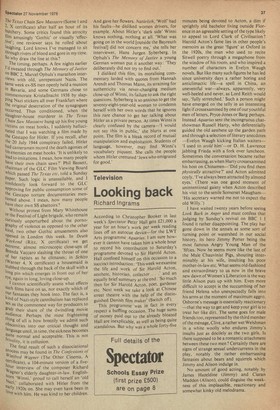 The Confessions of Winifred Wagner (The Other Cinema) Before getting down to grimmer matters, let me urge you to see Orson Welles's Ffar Fake (Essential and Electric Cinemas). That is, if as a child you ever liked prying open those little wooden ducks which contain an end" less series of smaller ducks inside their hollow interiors. I enjoyed every dubious minute of this bit of hanky-panky. F for Fake purports to be a master Illusionist's tongue-in-cheek comment on the art of forgery which, Welles implies, may he the last refuge of a truly honest man in a world of charlatans known as 'experts.' This is, of course, every con man's rationalisation for cheating his fellow citizens. And Welles does gull us. By shuffling and re-editing frames from another film, by FranGois Reichenbach, about the notorious art lator' Elmyr de Hory, Welles produces—°°t of a hat, as it were—his own beguiling oneman show. Several years ago, wheil Reichenbach shot a documentary about ue Hory in Ibiza. the art forger's biograPher Clifford Irving—later famous for concocting a fake Howard Hughes biography_'aS merely a handsome young man in the bad(ground. By clever cutting, Welles capitalises on the Irving footage to insinuate that he, Welles, is on the spot talking both to Irving and de Hory (which I don't think actuallY happened). Any gaps Welles fills in With shots of himself eating, drinking and, in that marvellous pseudo-serious bass of his:, lecturing us on the avaricious pretensions oi the real villains, the art market entrepren: eurs. `Art is a lie that makes us see the truth. Welles approvingly quotes Picasso. F for Fake masquerades as a film about fraud but is really a meditation on the artist as salesman among philistines hostile to his Prof duct. 114 is, in other words, a fragment ° Welles's autobiography. A must.

Nauseated and shaken, I walked out of

The Texas Chain Saw Massacre (Scene I and 2, X certificate) after half an hour of its butchery. Some critics found this atrocity 6.1o) amusingly 'Gothic' or visually 'effective; one reviewer says he rolled about laughing. Lord knows I've managed to sit through rivers of blood and gore in my time. So why draw the line at this?

The timing, perhaps. A few nights earlier 1 d sweated through The Memory of Justice on BBC 2, Marcel Ophuls's marathon interviews with old, unrepentant Nazis. The Same week ex-SS men openly held a reunion In Bavaria, and some Germans chose to commemorate Kristallnacht 1938 by slapPing Nazi stickers all over Frankfurt where the original desecration of the synagogues occurred. Thus conditioned, when the slaughter-house murderer in The Texas Chain Saw Massacre hung up his five young victims on meat hooks. I suddenly hallucinated that I was watching a film made by the Gestapo for Hitler. If you recall, after the 20 July 1944 conspiracy failed. Hitler had cameramen record the death agonies of his enemies on meat hooks. 'It is unlikely to lead to imitations. I mean, how many people have their own chain saws?' Phil Bassett, chairman of the GLC Film Viewing Board which passed The Texas etc, told a Sunday Paper. Such logic is unassailable, and I confidently look forward to the GL( anDroving for public consumption some of the Gestapo torture documentaries mentioned above. I mean, how many people have their own SS abattoirs?

Without protest from Mary Whitehouse Or the Festival of Light brigade, who remain curiously unperturbed about the porno,graPhy of violence as opposed to the other Kind, two other Gothic amusements also °Pened in London this week. In Death Iiieekend (Ritz, X certificate) we get extreme, almost microscopic close-ups of Brenda Vaccaro slashing the throat of one of her rapists as he climaxes; in Schizo (Warner 4, X certificate) a housemaid is stabbed through the back of the skull with a 1°ng pin which emerges in front out of her eye, again in long, loving close-up. 1 cannot scientifically assess what effects such films have on us, nor exactly which of ,°u. r fantasies they hook into. The fact is, a IcInd of Nazi-style cannibalism has reellaced sex as the commonest way for producers to grab their share of the dwindling movie audience. Perhaps the most frightening thing of all is how breezily we admit such t?bscenities into our critical thought and language until, in time, the sickness becomes (itttite normal and acceptable. This is not

y it is collusion.

The final result of such a dissociational. 'Process may be found in The Confessions of 11/milred Wagner (The Other Cinema, A c,ertificate), a 104-minute version of a fiveOur interview of the composer Richard bwagner's elderly daughter-in-law. EnglishN° 'Winni.' 'Winni,' proud to call herself an 'old 17azi,' collaborated with Hitler from the edrly 1920s on. She may even have been in uve with him. He was kind to her children.

And gave her flowers. Natiirlich, 'Wolf' had his faults—he disliked women drivers, for example. About Hitler's 'dark side' Winni knows nothing, nothing at all. 'What was going on in the world [outside the Bayreuth festival] did not concern me,' she tells her interviewer, Hans Jurgen Syberberg. In Ophuls's The Memory of Justice a young German woman put it another way: 'They deliberately did not try to find out.'

I disliked this film, its moralising commentary larded with quotes from Hannah Arendt and Thomas Mann, its straining for authenticity via never-changing medium close-up of Winni, its failure to ask the right questions. Syberberg is so anxious to get the seventy-eight-year-old woman to condemn herself with her own words that he ignores this rare chance to get her talking about Hitler as a private person. At times Winni is clearly confused by the camera-1 would not say this in public,' she blurts at one point. The film is a bleak record of mutual manipulation and exploitation. Students of language, however, may find Winni's vocabulary piquant. She calls the people whom Hitler cremated 'Jews who emigrated for good.'