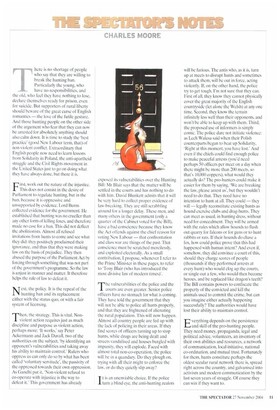 There is no shortage of people who say that they are willing to break the hunting ban. Particularly the young, who

have no responsibilities, and the old, who feel they have nothing to lose, declare themselves ready for prison, even for suicide. But supporters of rural liberty should beware of the great curse of English romantics — the love of the futile gesture. And those hunting people on the other side of the argument who fear that they can now be arrested for absolutely anything should also calm down. It is time to study the 'best practice' (good New Labour term, that) of non-violent conflict. Extraordinary that English people now need to learn lessons from Solidarity in Poland, the anti-apartheid struggle and the Civil Rights movement in the United States just to go on doing what they have always done, hut there ills.

irst, work out the nature of the injustice.

This does not consist in the desire of Parliament to regulate hunting, but in the ban, because it is oppressive and unsupported by evidence. Lord Burns collected evidence for the government. He established that hunting was no crueller than any other form of killing foxes, and therefore made no case for a ban. This did not deflect the abolitionists. Almost all refused invitations from hunts to come and see what they did: they positively proclaimed their ignorance, and thus that they were making law on the basis of prejudice. They then abused the purpose of the Parliament Act by forcing through something that was not part of the government's programme. So the law is unjust in manner and matter. It therefore helps the rule of law to defeat it.

Next, the policy. It is the repeal of the hunting ban and its replacement either with the status quo, or with a fair system of licensing.

Then, the strategy. This is vital. Nonviolent action requires just as much discipline and purpose as violent action, perhaps more: 'It works,' say Peter Ackermann and Jack Duvall, two of the authorities on the subject, 'by identifying an opponent's vulnerabilities and taking away his ability to maintain control.' Rulers who oppress us can only do so by what has been called 'voluntary servitude', the passivity of the oppressed towards their own oppression. As Gandhi put it, 'Non-violent refusal to co-operate with injustice is the way to defeat it. This government has already

exposed its vulnerabilities over the Hunting Bill: Mr Blair says that the matter will be settled in the courts and has nothing to do with him. David Blunkett admits that it will be very hard to collect proper evidence of law-breaking. '['hey are still scrabbling around for a longer delay. These men, and many others in the government (only a quarter of the Cabinet voted for the Bill), have a had conscience because they know the Act offends against the chief reason for voting New l.abour — that confrontation and class war are things of the past. That conscience must be scratched mercilessly, and exploited electorally. As a small contribution, I propose, whenever I refer to the Prime Minister in these pages, to refer to 'Tony Blair (who has introduced the most divisive law of modern times)'.

The vulnerabilities of the police and the courts are even greater. Senior police officers have no stomach for what is coming. They have told the government that they will not be able to police all hunts properly, and that they are frightened of alienating the rural population. This will now happen. Almost all country people are fed up with the lack of policing in their areas. If they find scores of officers turning up to stop hunts, while drugs are being dealt and streets vandalised and houses burgled with impunity, they will explode. Faced with almost total non-co-operation, the police will be in a quandary. Do they plough on, trying with all their might to enforce the law, or do they quietly slip away?

It is an unenviable choice. If the police turn a blind eye, the anti-hunting zealots will be furious. The antis who, as it is, turn up at meets to disrupt hunts and sometimes to attack them, will be out in force, acting violently. If, on the other hand, the police try to get tough, I'm not sure that they can. First of all, they know they cannot physically cover the great majority of the English countryside (let alone the Welsh) at any one time. Second, they know the terrain infinitely less well than their opponents, and won't be able to keep up with them. Third, the proposed use of informers is simply comic. The police dare not initiate violence: as Lech Walesa said when their Polish counterparts began to beat up Solidarity, 'Right at this moment, you have lost.' And even if the chiefs could find enough police to make peaceful arrests (you'd need perhaps 50 officers per meet on a day when there might be more than 200 meets, so that's 10,000 coppers), what would they actually do? The pro-hunters could make it easier for them by saying, 'We are breaking the law, please arrest us', but they wouldn't need to do that. They need have no intention to hunt at all. They could — they will — legally reconstitute existing hunts as hound exercise clubs and drag-hunts. They can meet as usual, in hunting dress, without need for concealment. They will be armed with the rules which allow hounds to flush out quarry for falcons or for guns or to hunt rabbits or rats. If their hounds do chase a fox, how could police prove that this had happened with human intent? And even if, somehow, they did convince a court of this, should they charge scores of people (thousands if they performed arrests at every hunt) who would clog up the courts, or single out a few, who would then become heroes, and be replaced like dragon's teeth? The Bill contains powers to confiscate the property of the convicted and kill the animals used to commit the crime, but can you imagine either actually happening successfully? The authorities would have lost their ability to maintain control.

Everything depends on the persistence and skill of the pro-hunting people. They need money, propaganda, legal and political advice, volunteers, an inventory of their own abilities and resources, a network of communication, local initiative, national co-ordination, and mutual trust. Fortunately for them, hunts constitute perhaps the oldest secular rural network there is, spread right across the country, and galvanised into activism and modern communication by the last seven years of struggle. Of course they can win if they want to.